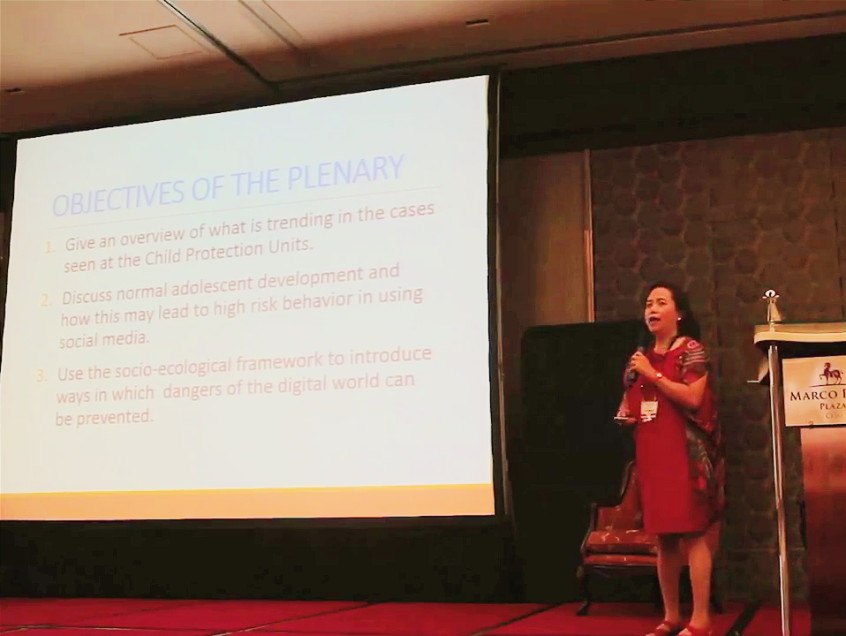 The second day of the Ako Para Sa Bata: Cyberprotection of Children conference saw Dr. Bernadette Madrid, the Executive Director of the Child Protection Network Foundation, Inc., exploring a key point in a plenary session for the conference’s framework: “The Developing Adolescent in the Digital Generation.”

The objectives of her plenary session involved giving an overview of trending elements in the cases seen at the Child Protection Units, discussing normal adolescent development and how it may lead to high-risk behavior in using social media, and using a socio-ecological framework to introduce ways in which dangers of the digital world can be prevented.

One of Dr. Madrid’s main points was how we should make an effort to not be paranoid about the Internet, as it is here to stay and is a fact of life that must be managed and understood rather than feared and avoided. She revisited this idea at various points during her talk.

Dr. Madrid made mention of the Child Protection Management Information System of the Philippine General Hospital’s CPU, and the data it tracks. She explained that it is looks into sexual abuse of children through social media: the most at-risk children are middle adolescents aged 10-13 and 14-16, with the highest incidence occurring in high school. In many of the cases the perpetrator of the abuse would be boyfriends, although they were not the sole sources.

A lot of victims are poor performers in school, according to Dr. Madrid, although the gathered data doesn’t specifically indicate causality. The information was unclear about which came first: risky behavior and abuse, or poor performance in school, and whether or not one would indeed directly cause the other. Dr. Madrid cited that this lack of clarity was the weakness of the cross-sectional studies that particular CPU looked into.

More data suggested that 41% of survivors would indeed claim their abusers were boyfriends. In turn, more than half admitted to meeting their boyfriends for the first time through social media, with some establishing a relationship even before meeting the boys in person.

The question of why this phenomenon has been on the rise, explains Dr. Madrid, can be answered by looking at what today’s generation of young people actually is. She noted that this generation of children is one of digital natives, or “screenagers.” As a multitasking generation, she explained further, it constitutes the largest proportion of digital media users. This significant population size correlates directly to increased risk among young people, as so many of them cannot help but be deeply entrenched in online behavior.

Returning to Dr. Madrid’s earlier statement about the need to not be paranoid about social media, she pointed out that there are major social anxieties prevalent among older generations regarding adolescent behavior and social media. She cited that on top of the moral panics about adolescent behavior in general, there is growing alarm about intense, addictive and widespread media consumption: a fact explored in Transcultural Psychiatry (Choudry, S. and McKinney, K., 2013). She also mentioned a quote from another study: “Are young people becoming unempathic, passive, intellectually shallow and uncritical, desensitized, depressed and attention-deficient because of cyber technology?”

Dr. Madrid then shifted the discussion to adolescent development, and why it must also be understood to have a better handle on adolescent behavior in general. Adolescence, she explained, is a period where children are more susceptible to addiction, such as to alcohol, drugs and smoking, and that includes Internet usage. In a related vein, there is an increased risk for receiving the more damaging effects of substance abuse because habits develop faster and are harder to eliminate. Adolescents are also more vulnerable to stress, which may lead to depression, and in turn also compromise their ability for empathy.

One Comment on ““#APSB2015: (1/2) The Developing Adolescent in the Digital Generation””