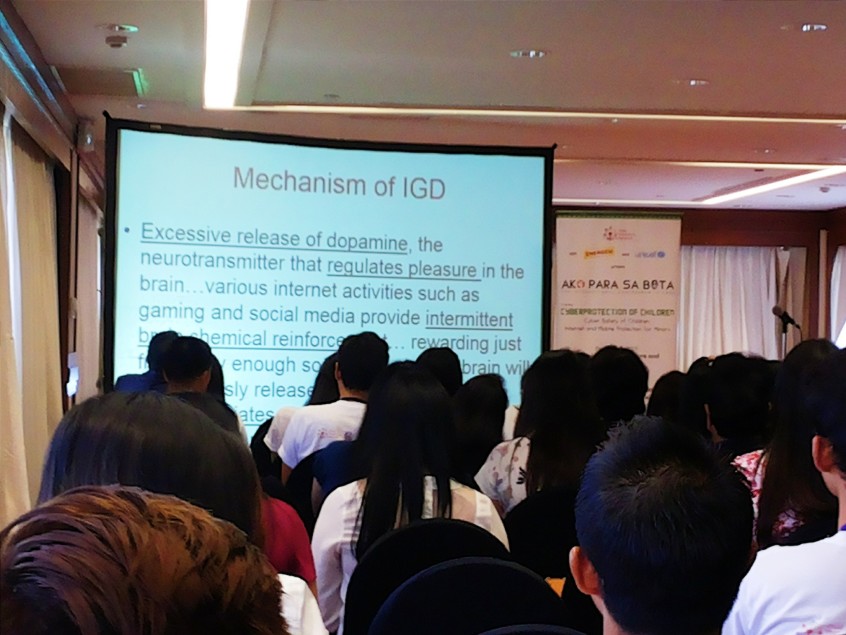 With the arrival of new technology often comes the fear of its potential perils. Naysayers have had much to say about TV, texting, virtual pets. These days, the villain is the Internet.

At Ako Para Sa Bata 2015: Cyberprotection of Children, all plenary talks and simultaneous sessions discussed the dangers children face when they go online or when they have their own devices. One session focused on the dangers of Internet gaming.

How much time do children spend online? Is it uncontrollable? Is it an addiction?

One important thing to note is that IGD is not officially recognized as a disorder by any psychiatric association just yet. According to the American Psychiatric Association Diagnostic and Statistical Manual of Mental Disorders, Fifth Edition (DSM-5), its current status is “Condition for Further Study,” meaning further research is required. As it has not yet been definitively declared a disorder, the symptoms and risk factors presented at the simultaneous symposium are not yet definite.

These criteria have been recommended to facilitate research. At least five of these criteria must be present for the IGD diagnosis.

Cinco shared the controversy surrounding IGD. She explained that one such problem is the terminology, as it creates confusion with Internet addiction and pathological computer use. Some would also question whether it is even a bona fide disorder, given that no addictive substances are involved. However, Cinco said, IGD is presented as a behavioral addiction, in the same way that gambling is an addiction, not a disorder of impulse control like kleptomania. Similar to gambling, it is also behavior that takes place repeatedly over time, according to her info.

Related:  #APSB2015: (1/2) The Developing Adolescent in the Digital Generation
The following two tabs change content below.