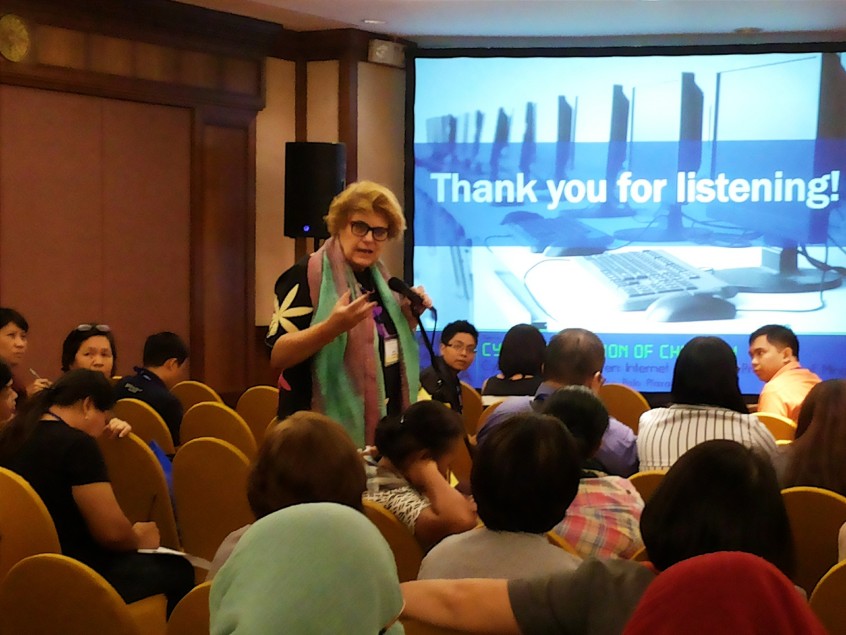 The comprehensive protection of children must be anchored on accurate information about threats they face.

At the Ako Para Sa Bata 2015: Cyberprotection of Children, many of the discussions revolved around threats found online.

In her presentation, Dr. Sandra Hernandez, child protection specialist from the Philippine General Hospital-Child Protection Unit, highlighted a critical gap: the absence of a comprehensive, nationwide survey on violence against children. But in the plenary talk on December 2, UNICEF’s Lotta Sylwander informed participants that such a survey is currently underway. Sylwander presented the preliminary findings.

Violence against children (VAC) is a universal problem that occurs in schools, homes and communities. It affects children of all ethnic, social and economic backgrounds. Different studies show that violence is on the rise—a fact that Sylwander shared.

Many studies show that VAC has devastating and life-long impacts, including life-long physical and mental health problems. Victims can never rid themselves of the trauma.

VAC takes many forms. Neglect is one form of violence, as it can also impair the human being. Other forms include: physical and emotional discipline, sexual abuse, bullying, child marriage, child labor, trafficking and armed violence.

Sylwander said, “Rapid access to new tech has brought new possibilities, new risks, through virtual world, through the internet, to contacts who will lead to abuse. Protecting children from online abuse is an urgent and global issue.” Sylwander called for all present to work towards ending VAC in all life settings.

In 2012, the UN published a review of research on child maltreatment. They found that its effects include negative physical health, negative mental health, high-risk sexual behaviors and increased exposure to violence later in life.

In 2015, research estimated that the cost of VAC was US$ 209 billion. Those were costs incurred in terms of lost development, hospital costs for treatment, and social costs in the life of the home and the community. In comparison, Typhoon Yolanda cost the Philippines US$ 3.5 billion.

Sylwander shared that the Philippines among four countries, along with Indonesia, Laos, and Cambodia, with a detailed national survey on VAC. She pointed out that these four countries have committed to a robust response plan once findings of the UNICEF survey are released.

Preliminary findings from National Baseline Study on VAC in PH

The Philippines is one of the top ten countries worldwide with rampant child online exploitation involving boys and girls aged 10 to 14 years. To make things worse, parents are often the perpetrators of these crimes. Their rationale is that it’s not child abuse, because the child isn’t being touched. They reason that the child is just doing what someone is telling them what to do.

At the forefront of response

Despite such a grim picture, Sylwander said that the government of the Philippines must be commended for implementing a comprehensive approach to child online protection. She cited the country’s strong legislation, including tough penalties for perpetrators of the worst crimes. She also mentioned that there is a joint commitment between UNICEF and the Philippine government to prevent online child abuse.

Sylwander emphasized, “Children must be part of the solution,” citing as an example the youth conference organized by the Child Protection Network prior to APSB 2015. In October 2015, youth delegates from around Cebu gathered in the Shift-CTRL-Del: Cyber Teens Responsible Leaders conference, and learned how to recognize and combat cyberbullying.

Sylwander also shared the UNICEF global program to address exploitation in 17 countries: the #WePROTECT model is a multi-sectoral prevention and response plan that involves agencies across different nations in the fight to protect children online.

Lotta Sylwander has been the UNICEF Representative to the Philippines since March 2014. Previously she represented the UNICEF in Vietnam and Zambia.

One Comment on ““#APSB2015: Violence against children in the Philippines – The Facts””