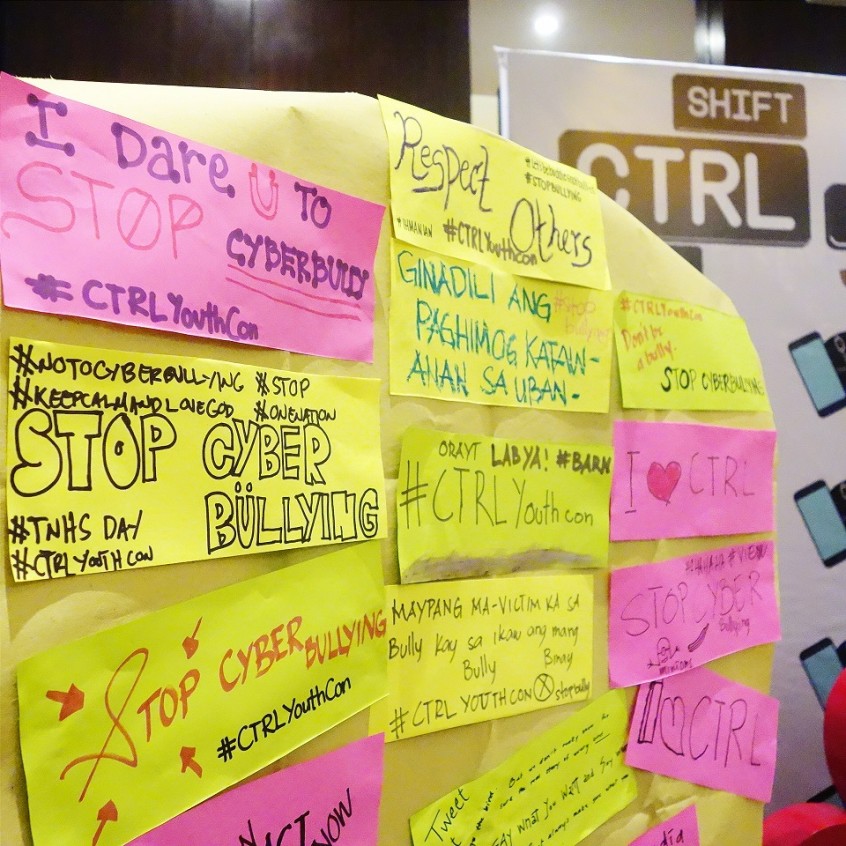 Young people from all over Cebu are pulling the plug on cyberbullying. Over 340 students and educators from about 100 public and private schools attended a youth conference on cyberbullying called Shift-CTRL-Del: Cyber Teens Responsible Leaders last October 17 to 18 at Bayfront Hotel in Cebu City.

Focusing on the nuances of online bullying and its effects on teens, the youth conference gathered student delegates in Grades 10 and 11 who have the potential to be digital advocates against cyberbullying and its dangers, including the rising cases of suicides linked to it.

United Nations Children’s Fund (UNICEF), Salesians of Don Bosco, and the Child Protection Network organized the youth conference with the help of youth volunteers to ensure that the conference is designed by the youth for the youth.

UNICEF’s Maria Margarita Ardivilla was the keynote speaker, and she opened the conference by emphasizing the role of the youth in this issue because they use social media daily. “Youth are the prime evolvers, you manipulate what is there,” she said. It is up to the young users to use it to inflict harm, inspire camaraderie, or fall into the traps of cybercrimes.

Young people may unknowingly put themselves at risk because the anonymity of the web provides a fake safety blanket, she said. “You share, you put yourselves out there. It is willingness to communicate with unknown individuals that leads to harm. It is the unregulated communications that increases the risk for children.”

The delegates were given the chance to listen to the lectures of social media expert Sonnie Santos, Atty. Lolita L. Lomanta from the Cebu Province Family Court, and Dr. Emma Alesna-Llanto from the Philippine General Hospital’s Adolescent Medicine.

Santos talked about the changing landscape of social media, its positive and negative effects, and the different types of cyber abuses. “Social media and the internet as a whole is a double-edged sword,” he said. A lot of people use social media to promote a good cause or to discover new talents but its unpleasant side includes ranting, misplaced sharing, and misplaced expression of opinion, he explained.

“When it comes to ranting, social media’s strength to accommodate is also its weakness,” Santos said. Online bashing and creating fan pages to humiliate people also counts as cyberbullying. A simple comment, share or retweet of a post that degrades another person may lead to unintentional online bullying.

Not only does cyberbullying traverse from the online to the real world, it can also be threatening physically and psychologically. The worst part is, this type of bullying can exist in perpetuity because the post can be re-shared and will not be easily erased. There is also a possibility for the post to reach a global audience.

Once over his experience with cyberbullying, Lao became an advocate of responsible usage of and sharing over social media.

When cyberbullying crosses over to the real world

Dr. Alesna-Llanto differentiated this emerging type of bullying from traditional or school yard bullying. “Traditional schoolyard bullying usually happens during recess or in the classroom, so it’s a limited space and the audience is limited. With cyberbullying, it can go global, depending on the networks. It can be just the circle of friends, social network. But it can also be nationwide and, of course, internet has no boundaries,” she said.

While traditional bullying is repetitive, its online counterpart can be done once but the effect may be multiplied exponentially and become destructive. Just one post can be reshared many times and have lasting effects, she said.

Dr. Alesna-Llanto also said that recipients of online bullying have a tendency to become bully-victims to avenge themselves. “These are the people who may start out as victims and they want to lash out because it’s easy. They don’t have to develop big muscles to get back at the bully. They can use technology to do that so it’s easy,” she explained.

In both cases of bullying, the victims have higher rates of depression and suicide, and agoraphobia or fear of open spaces, she said.

She also emphasized the importance of reporting cases of bullying to an adult or higher authority who can help get the child the proper medical or psychological help.

What the law says and what we can do

Cyberbullying is covered in Republic Act 10627 or the Anti-Bullying Law, enacted in 2013. Under this law, people who experience bullying including those done online, are protected by the state. Atty. Lomanta clarified, however, that bullying is not defined as a crime and you can’t bring a case of bullying into court. However, when the act of bullying constitutes a crime like libel, homicide, physical injuries or pornography, that’s when you bring a case to court, she said.

“If you will examine the Anti-Bullying Law, there really is no penalty. The law only mandates the school to identify disciplinary measures commensurate to the gravity of the act committed by the perpetrator,” Atty. Lomanta said.

It is now up to the schools to incorporate sanctions against cyberbullying in their policies. Victims can still gather evidence of cyberbullying and report to authorities.

The next step is to resist the temptation to react, Atty. Lomanta said. If the bullying is done online, she explained that it is so easy to block or unfriend an offender but once they retaliate, they can also be sanctioned as a perpetrator of cyberbullying in their school.

All possible scenarios around preventing, handling, surviving and getting over cyberbullying must be understood by teens, and for Atty. Lomanta, it is the joint responsibility of the parents, teachers and school authorities to do so.

Dr. Alesna-Llanto agreed, and added that despite all dangers and risks, she would like to emphasize that teens are resilient, and with proper guidance and good values, they can overcome, if not prevent, cyberbullying.