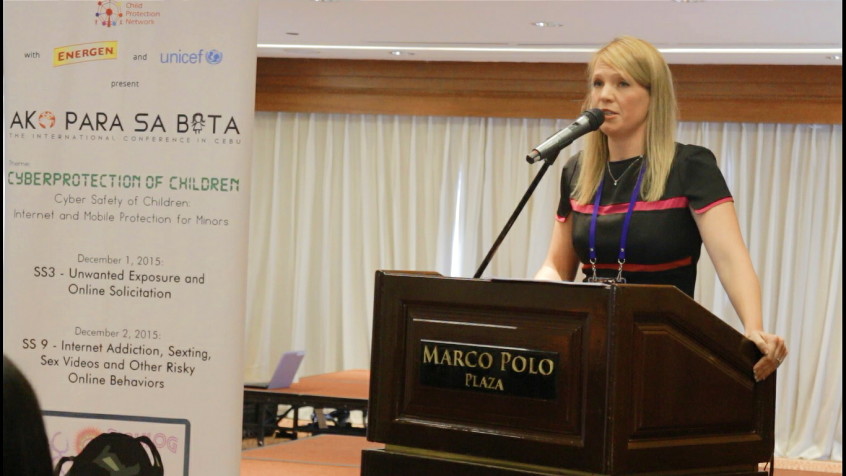 Children and young people are exposed to the Internet as soon as they get their first laptop, tablet, or mobile phone. While they may use it to simply communicate with family, friends, or to play games, logging onto the Internet also means that they are vulnerable to strangers who may trick them or solicit them to do sexually explicit acts.

These sexually explicit acts pertain to asking for nude photos of the children or asking them to do lewd acts in front of a web camera. Understanding the techniques of online predators and devising ways for children not to fall prey to their attacks were discussed in a parallel session of Ako Para sa Bata 2015: Cyberprotection of Children held in Marco Polo Plaza Cebu on December 1 and 2, 2015.

The session called “Unwanted Exposure and Online Solicitation” brought to light the methods online predators use such as child grooming, modelling, or even creating fake relationships.

Detective Superintendent Paul Hopkins, Australian Federal Police Senior Liaison Officer in Manila, said that two groups who are most adept at avoiding the police are terrorists and pedophiles. “They can take one step ahead, which is why we need the help of the whole community,” he said.

Hopkins gave three case studies of Australian nationals who were caught soliciting child pornography in the Philippines. They would use the technique of grooming to make the victim feel comfortable with them.

Grooming is a technique where the predator would befriend the victim and maybe even send them gifts to gain their trust.

One case involved a 60-year-old male who contacted a 13-year-old girl in Northern Philippines. He even went to their province to visit her. He then offered her family a car and computer if she were to “marry” him. Thankfully, her parents did not agree. He simply withdrew his offer but since there was no actual exchange, he couldn’t be convicted.

It could have been a case of attempted trafficking but it would be hard to prove, Hopkins said.

Another case was of another male who befriended a mom and promised her that he would send her kids to school. Being poor, desperate, and uneducated, this mother was duped into complying with the requests of the online predator, who occasionally wired money to her account on a pay-per-view basis.

“We call it, in police terms, Stockholm’s Syndrome. Gradually he gets inside her mind until such time that she’s actively putting her own children in front of the video, at first just naked and then actually leading into sexual activity,” Hopkins said.

By intercepting his communication after getting tips from concerned citizens from Australia, he was investigated and both the predator and the mother were caught.

“I do feel sorry for her. She was pretty much conned into doing it by this disgraceful person back in Australia. He will face years in prison, he might get seven or eight years but she’s facing life. We argue whether or not the worst thing you can do as a parent is harm your kids and as a parent I agree, but on the other hand here’s a very poor person and it’s just a sorry, sorry case,” he said.

These videos were then sold on the Internet for as much as $10,000. Filipino and non-Filipino nationals, including a German and a Brazilian doctor, were caught during an entrapment operation.

“Our work in the law enforcement is such a small part that needs to be done all around the world,” Hopkins said.

Scully is currently facing trial over five counts of rape and one count of human trafficking. He is also under investigation over the rape of an 18-month-old baby girl and the murder of a 12-year-old girl whose remains were found in the backyard of a house he’s renting.

“We sometimes get all the credit but we only catch very few and it’s far, far better to prevent than to catch an offender,” Hopkins said.

2 Comments on “#APSB2015: (1/2) Grooming, sextortion, and other online predatory acts: How online child sexual abuse happens and how to prevent it”