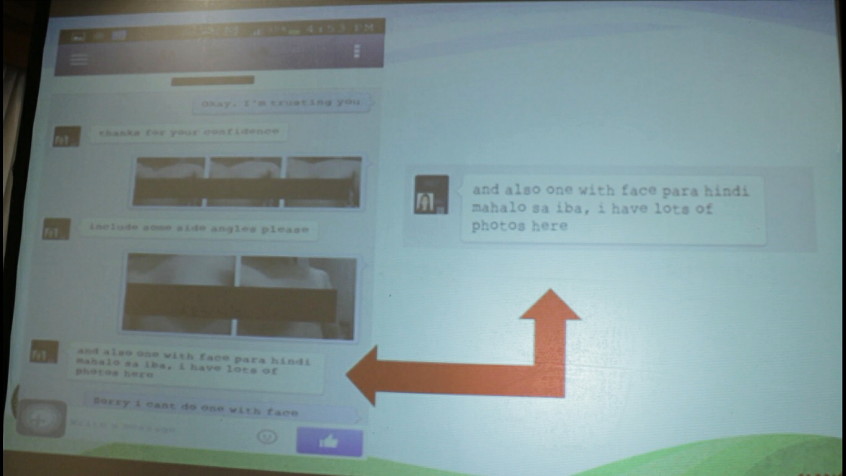 Understanding the techniques of online predators and devising ways for children not to fall prey to their attacks were discussed in a parallel session of Ako Para sa Bata 2015: Cyberprotection of Children held in Marco Polo Plaza Cebu on December 1 and 2, 2015.

The session called “Unwanted Exposure and Online Solicitation” brought to light the methods online predators use such as grooming, modelling, or even creating fake relationships.

The Philippines is one of the countries with the highest child sextortion cases in the world, according to Police Superintendent Ma. Ivy Castillo, Assistant Chief of the Cyber Security Research and Analysis Division of the Philippine National Police Anti-Cybercrime Group (PNP-ACG).

Sextortion is the act of extorting money from someone by blackmailing them with sexually explicit photos or videos, Castillo explained.

Perpetrators would use the method of “modelling,” or conning the victim by pretending to be a talent scout. The perpetrator would contact the victim and pretend to offer a career in modelling so that he or she would send sexually explicit or nude photos.

After the photos are sent, that’s also when the perpetrator would reveal his or her true nature to extort money. They would also sometimes “break up” with the victim, after which they would sell the photos they gathered to online child pornography sites.

Pay-per-view also happens in the Philippines. Most of the time, the mediator between the perpetrator and the child is someone the child knows. Sadly, for 40% of the recorded cases, the mediators are the parents, followed by 27% being the neighbor or friend.

Most of the mediators rationalize their acts of exploitation, Castillo said. “Kumikita ‘yong bata kaya kaunti lang ‘yong nagrereport sa atin kasi kumikita sila dito (The children earn money from this; that’s why only a few report, because they have made this their livelihood),” she said.

Castillo said that the PNP-ACG would use both reactive and proactive approaches when it comes to handling this problem. Their reactive approach entails them to handle walk-in complaints, as well as online complaints from their online referral site, AngelNet.ph.

Their proactive approach includes cyber patrolling or open search investigation, online engagement or baiting predators by taking over the account of victims, as well as the takedown of the offender’s accounts.

Similar efforts are being done in the United Kingdom, implemented since 2006 by the Child Exploitation and Online Protection Centre (CEOP).

Stephanie McCourt of the UK Law Enforcement National Crime Agency said that through their Click CEOP or online reporting tool, around 400 victims would come forward every month. Over 200 children, some as young as eight years old, have self-reported cases of online sexual abuse. “The victim should never be blamed,” she clarified.

Through their reporting tool, they have managed to help with 12 operations over the last two years. One was called “Operation Perdition,” where a group of Bahraini nationals, who victimized 17 young people in the UK alone, were caught.

Using over 34 Facebook profiles, 45 email addresses, and 2 Skype accounts, the five Bahrainis targeted victims in Europe because of their “liberal attitudes.” Operation Perdition led to the arrest and conviction of these predators.

“This is not technology. This is behaviour. Child sexual abuse predates the technology, this is just the enabler,” McCourt said.

CEOP’s preventive program is their educational Think U Know (TUK) campaign that aims to spread awareness and empower children. Through the Think U Know campaign, children can access age-appropriate materials on how to stay safe online. Over the last nine years, the program gained a network of over 31,000 TUK trainers, 100,000 users, and 17 million children have been reached. TUK also go around schools to talk about these issues.

“It’s so important to educate the children. Education is the key,” McCourt said.

2 Comments on “#APSB2015: (2/2) Grooming, sextortion, and other online predatory acts: How online child sexual abuse happens and how to prevent it”