Cyberbullying is real, and its effects on teens more so. That’s why student and teacher delegates of Shift-CTRL-Del: Cyber Teens Responsible Leaders join forces to find ways to minimize, if not completely stop, the spread of this “increasingly disturbing phenomenon.”

At the end of the two-day Youth Conference on Cyberbullying held in October 2015, student representatives from public and private schools in Cebu crafted a Manifesto Against Cyber Bullying, while a Declaration of Support for the same was likewise provided by teachers and counselors present at the conference.

The Manifesto strengthens the commitment of students to be “catalysts in an enlightened youth movement that boldly stands up against cyberbullying, and raises awareness and educates fellow teenagers on the responsible use of Information and Communications Technology.” As digital advocates and Cyber Teens Responsible Leaders, they give “voice to those who don’t have the courage to seek help and speak out.”

The teachers’ Declaration of Support affirms their commitment to start and champion programs against all forms of bullying inside their respective schools. With insights and actionable solutions gathered from the parallel sessions during the conference, the teachers are now more enlightened and capable “for collaboration and networking with different agencies and stakeholders in the community so that children’s rights will be protected, respected and upheld.”

Organized by Child Protection Network, Salesians of St. John Bosco and UNICEF Philippines, #‎CTRLYouthCon‬ aims to produce digital advocates out of students and teachers who will spread the word on respectful and responsible use of social media.

Manifesto of the Cebuano Youth Against Cyber Bullying 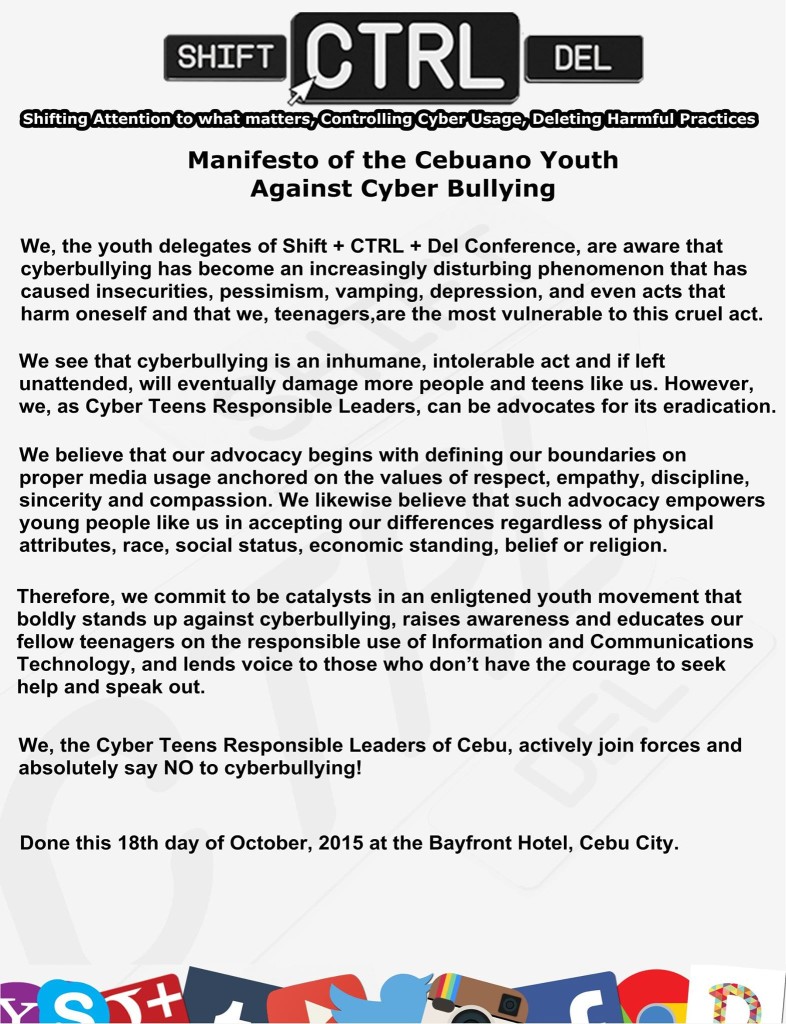 “Manifesto of the Cebuano Youth Against Cyberbullying” created at the #CTRLYouthCon last Oct 17-18, 2015 in Cebu.

We, the youth delegates of Shift+CTRL+Del Conference, are aware that cyberbullying has become an increasingly disturbing phenomenon that has caused insecurities, pessimism, vamping, depression, and even acts that harm oneself and that we, teenagers, are the most vulnerable to this cruel act.

We see that cyberbullying is an inhumane, intolerable act and if left unattended, will eventually damage more people and teens like us. However, we, as Cyber Teens Responsible Leaders, can be advocates for its eradication.

We believe that our advocacy begins with defining our boundaries on proper media usage anchored on the values of respect, empathy, discipline, sincerity and compassion. We likewise believe that such advocacy empowers young people like us in accepting our differences regardless of physical attributes, race, social status, economic standing, belief or religion.

Therefore, we commit to be catalysts in an enlightened youth movement that boldly stands up against cyberbullying, raises awareness and educates our fellow teenagers on the responsible use of Information and Communications Technology, and lends voice to those who don’t have the courage to seek help and speak out.

We, the Cyber Teens Responsible Leaders of Cebu, actively join forces and absolutely say NO to cyberbullying!
Done this 18th day of October, 2015 at the Bayfront Hotel, Cebu City.

“Declaration of Support to Cebuano Youth Manifesto” created at the #CTRLYouthCon last Oct 17-18, 2015 in Cebu.

We, the teacher delegates of the Shift+CTRL+Del, being educators and mentors of the Cebuano children and youth, declare our full commitment and support, with our presence, talents, and resources to fight all forms of bullying.

We will initiate programs/projects that will raise awareness about bullying among faculty, students and their parents; that will empower the Cebuano Youth in the fight against all forms of bullying; update and implement anti-bullying school policies and promote the anti-bullying act/law across educational curriculum and practices in public and private offices.

We commit ourselves to be open for collaboration and networking with different agencies and stakeholders in the community so that our children’s rights will be protected, respected and upheld.