On September 20, a brilliant initiative on gender equality was launched with the help of no less than “Harry Potter girl” Emma Watson. Known as the HeForShe campaign, the initiative was conceptualized as a solidarity movement that involves not just women but also men, and the spectrum in between, in the cause for equality. 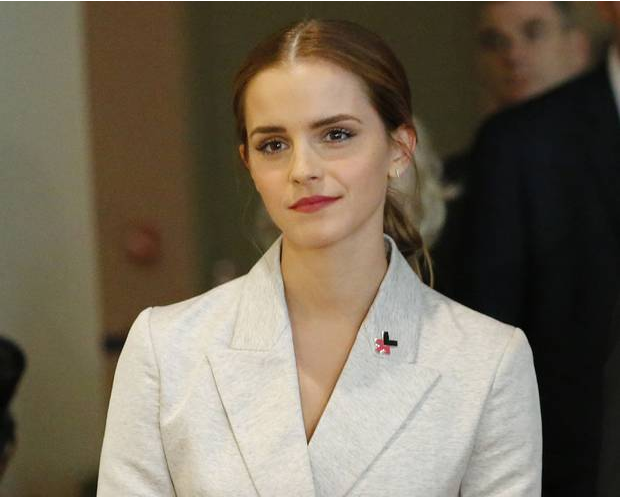 With shaking yet clear voice, she said in her speech, “I want men to take up this mantle. So their daughters, sisters and mothers can be free from prejudice but also so that their sons have permission to be vulnerable and human too—reclaim those parts of themselves they abandoned and in doing so be a more true and complete version of themselves.”

Enjoining boys and men in the cause for women’s rights has been seen as one of the critical aspects of the fight for equality, according to experts all over the world.

Six months into the job as UN Women Goodwill Ambassador, Emma brings attention to an issue where no one nation can claim to have achieved.

The Philippines is no exception. In the same week as the celebrity made the pivotal speech, writer Karen Kunawicz found at the SM Department Store’s Boys Section a T-shirt design that qualifies rape as “a snuggle with a struggle.”

Posted on September 22, the photo went viral and was picked up not only by local news agencies but the international press as well. According to The Independent, Karen wrote this after posting the image: “I count myself among those worked really hard especially in the 90’s for the rights of girls and women so it really got me upset. I was shaking when I took it. I wanted to throw up.”

On September 23, SexAndSensibilities.com said “Sources who have made the rounds of SM department stores say that the shirt is no longer available. It’s sold out. (So mabenta sya?) Justification of rape and trivializing the need for consent in the guise of humor does nothing but promote #rapeculture.”

Initial word about the shirt being part of the merchandise for a popular radio show, Boys’ Night Out, but was disproved by one of its hosts on Twitter.

To those asking, that shirt on FB going around saying “it’s a snuggle with a struggle” is NOT a BNO tee .. Thanks! Mwahugzzz <3

After getting slammed online, the country’s largest mall chain also took to Twitter its apologies about the incident.

We have yet to know whether the shirts were really pulled out by the management or were sold out, and we’re also very interested in who designed the shirt and which brand consigned it with SM Stores. But there are hints that the design was plagiarized from a shirt sold in the US. 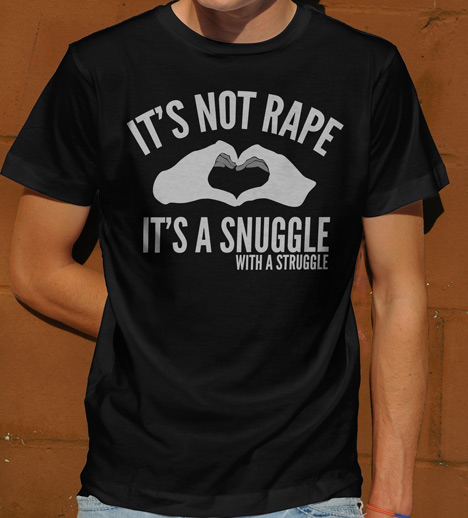 “Inspiration” for the rape shirt sold at SM Stores? | Photo from FoulMouthShirts.com

There’s witty and there’s plain distasteful. That’s what we think of those shirts promoting rape culture, and also a “stunt” done at a recent fashion show held by a homegrown fashion brand.

While our newsfeeds were flooded with photos and listicles of the sexiest half-naked celebrities at “The Naked Truth” by Bench, Coco Martin walked onstage fully clothed while pulling on the leash of a girl walking on all fours. 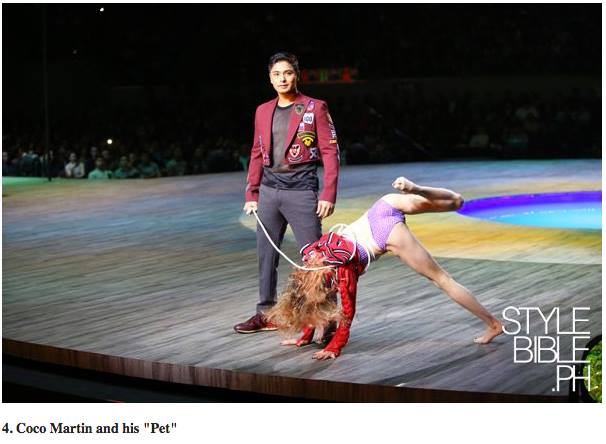 Coco Martin and his ‘pet’ were said to have drawn applause and cheers from the crowd at The Naked Truth | Photo and in-caption by StyleBible.ph

While we continue to tell young boys and girls that we do not have to subscribe to the idea of ‘perfect body’ fed to us by mainstream media on a daily basis, there are people and brands who push the other way with distorted ideas of gender stereotypes and, we dare say, basic humanity.

Stacy of ThePlumPinay.com says, “If we continue to tolerate this form of ‘entertainment,’ before we know it, our society would be watching live porn right before their eyes and be so completely blinded and numbed by the media to see it as harmless amusement. Heck, it’s happening now—a lot of people aren’t even able to tell what can harm us as a society with the kind of sex-obsessed culture we are creating. We’re becoming more and more reckless, not considering the values we impart to the youth who will be left to run this world when the future comes. Is this what marketing has come to? Degrading and sexually objectifying human beings for the sake of profit?” 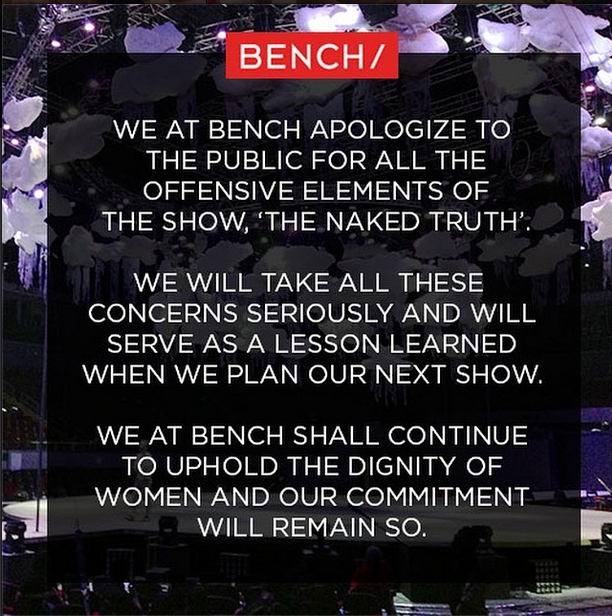 Senator Pia Cayetano has released her official statement about all these issues, acknowledging the public apologies made by SM Stores and Bench, but also calling on student leaders, teachers, and school administrators to promote gender sensitivity:

“I immediately raised this issue to Ben Chan, Chairman and CEO of Bench – who I happen to know personally. I told him that while I respect the artistic license of the team that conceptualized the fashion show, the derogatory portrayal of women is offensive and should not be tolerated. Such portrayals reinforce society’s sexist view of women, instead of contributing to the gender education of our people, especially of our youth…

‘Statement shirts,’ as we call it, have become popular among the youth. In fact, the controversial shirt was reportedly being sold at SM’s Boys section and thus were being marketed to male teenagers. And so I asked school presidents and administrators to take the lead in promoting gender sensitivity among their students, and also with members of their faculty and staff…

Rape is a sensitive and serious matter that our society continues to struggle against. Rape can never be justified regardless of the circumstances — and much less trivialized on a statement t-shirt…”

What do you think about this issue? How else can we promote gender sensitivity and equality?

Online Community Manager at MP-KNN
Rocel is an experienced writer, editor, and creative director. She is a graduate of the Certified Digital Marketer program from the Internet and Mobile Marketing Association of the Philippines (IMMAP). Her work for MP-KNN encompasses the project’s website and social networking presence, facilitating online interaction and info sharing.

2 Comments on “Where Are We in the Fight for Equality?”