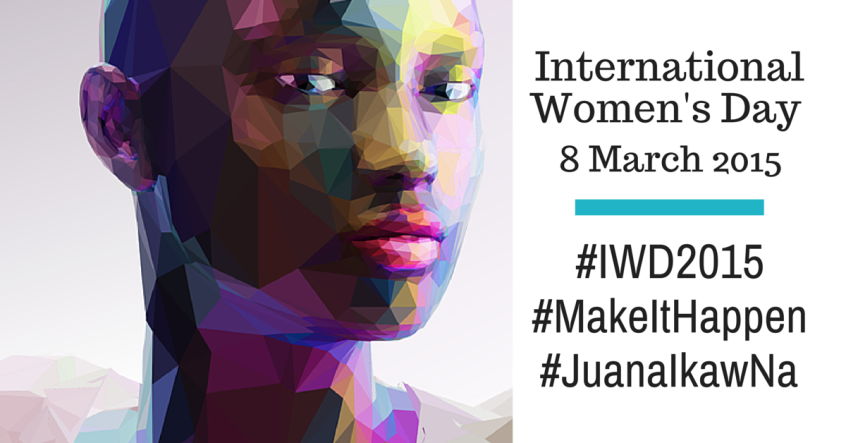 The world observes International Women’s Day (IWD) every March 8th. As early as the industrial revolution in the 1900s, IWD has been observed in various ways, including women marching by the thousands demanding for better work conditions, voting rights, and equality on all levels.

This year, #IWD2015 will be celebrated in the Philippines and worldwide with numerous activities initiated by governments, and private and civil society organizations. Check which ones are near you or interest you the most, and join in the fun!

MARCH 6: In Her Shoes Year 2 by the National Youth Commission

What does it really like to be in a woman’s shoes? You might think the National Youth Commission (NYC) took it literally with its “In Her Shoes” initiative, but it is symbolic too to experience the pressures of society on women to look good despite discomfort on all levels–from physical to emotional and economical. In Filipino colloquial this may be refered to as “tiis ganda.” 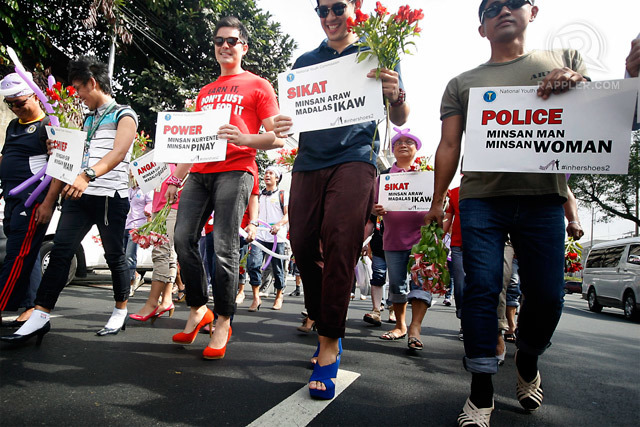 Now on its second year, “In Her Shoes” encourages males to take the challenge of wearing women’s shoes to call attention to the often neglected lived experiences of women in a society where inequality is deeply-rooted, says the NYC.

“To walk in women’s shoes is a challenge for men to understand and reflect on the daily plight of women, rethink attitudes toward them and to realize the bias against women that is inherent in our culture, practices and values,” says NYC Chair Gio Tiongson.

Yes, you read that right. You can celebrate #IWD2015 with actress Emma Watson, who spearheads the #HeForShe campaign in her real-life role as the UN Women Goodwill Ambassador. The campaign aims to get men involved in the fight for gender equality worldwide. You’ve got to share your personal story about gender equality here so she can choose you to join her at the Q&A on 8 March 2015 to be livestreamed on Facebook. It will start at 1PM in New York City, 5PM in London, and 1AM (9 March 2015) in Manila. In case you missed it, she delivered an inspiring speech in September 2014 to launch #HeForShe. 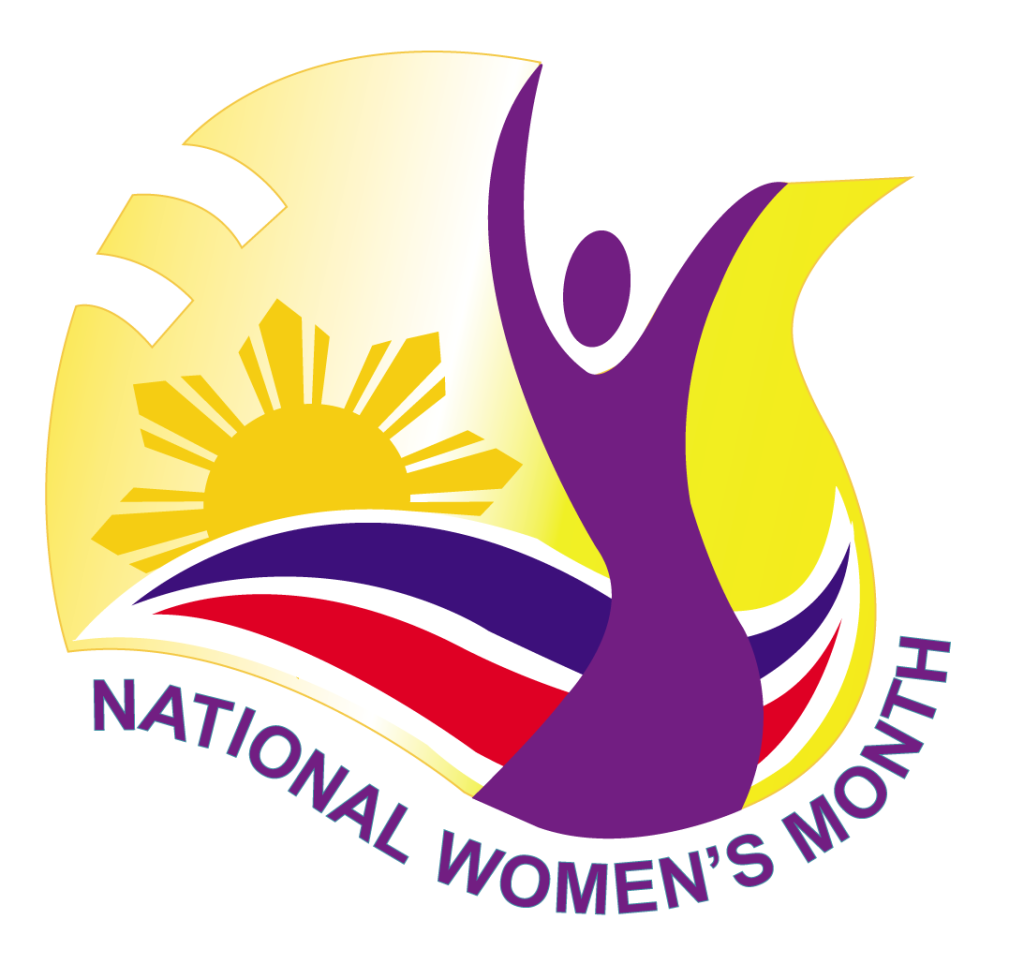 On March 8, participants of the Simultaneous Nationwide Street Dance starts convening at 5AM at the Quezon Memorial Circle Biking area near the Visayas Avenue and Commonwealth Avenue entrances. If you want to join this activity, you must wear the official Women’s Month t-shirt or any purple shirts, paint a woman symbol on their faces, and learn the official dance video. Sounds exciting? Check out the full details here.

In partnership with the Government Service Insurance System (GSIS), PCW holds a month-long photo contest that aims to get the public perception on women’s roles in politics or decision-making process. This competition is open to all amateur photographers. Read the mechanics here. 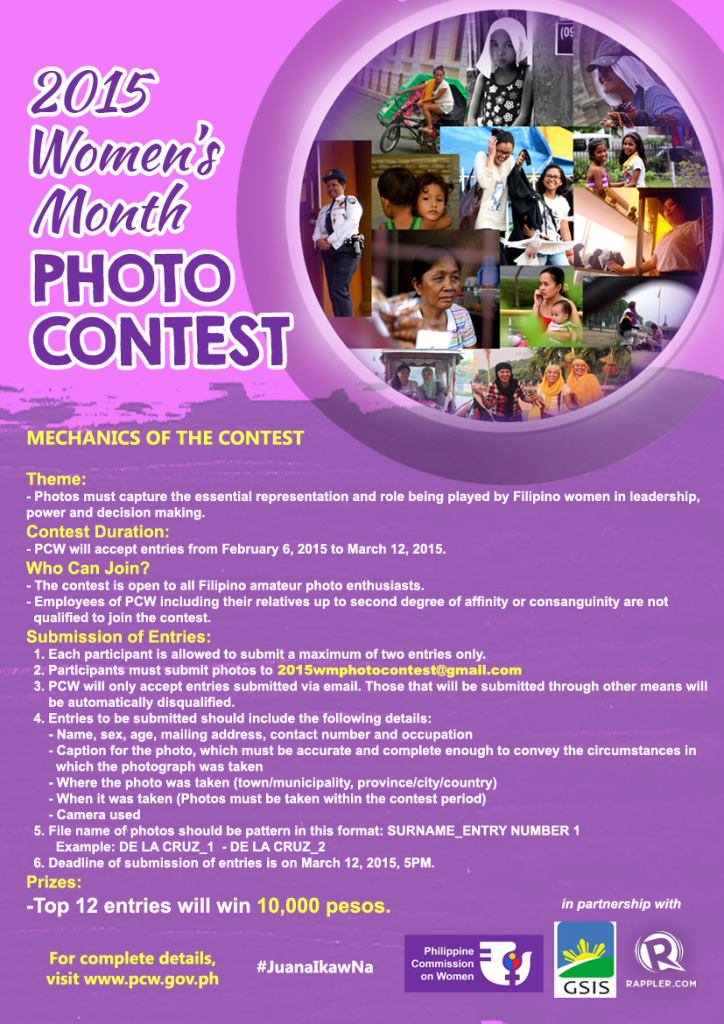 The Firefly Brigade, a non-government organization that promotes the use of the bicycle for clean air and sustainable communities, plans to hold a Critical Mass Ride (CMR) on 22 March 2015 (Sunday) from 7AM to 12NN.

MARCH 24: Forum on Women in Leadership, Power and Decision-Making – “Why Women? Why Now? Why You?”

Open to women employees of the government, this forum organized by PCW will serve as a venue for them to learn from the sharing of experiences of different women leaders in civil society, academe, bureaucracy and electoral body, thus, inspiring them and creating opportunities for them to exercise and develop their leadership and decision-making skills.

Find out how to join the forum here. The deadline of submission of registration forms in on 16 March 2015 (Monday).

Happening on 26 March 2015 (Thursday, 1PM) at the GSIS Theater in Pasay City, the Women and Media Summit will facilitate the sharing of best practices of women in the media. According to the PCW, “this will also highlight media’s role and influence on ‘Juana’s’ political power and leadership, and her participation to promote gender-sensitivity and gender-responsiveness in all forms of media.”

It will also be the venue for the awarding ceremony of the 2015 GADtimpala Awards for Media and the Women’s Month Photo Contest.

Do you have any #IWD2015 activities you want to share with us? Send us an email at [email protected] or message us on Facebook or Twitter.