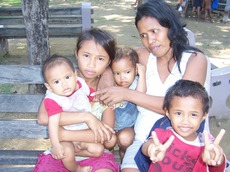 Given the alarming statistics on the infant and maternal mortality rate in the Philippines for the past decades, no comprehensive response has yet been provided by the state to respond to these PREVENTABLE deaths. In other countries, public health policies on this are automatically provided by the government on the basis of people’s rights to information and access to quality healthcare. No contentions on these provisions from any sector can influence the state’s obligations and people’s rights to health and information. However, the reproductive health bill in our own country faces the influential opposite stand of the dominant religious hierarchy, resulting in the continuous rate of deaths everyday due to lack of information and provision of healthcare facilities and services that are supposedly free and accessible.

Items 4 and 5 of the UN Millenium Development Goals of 2015 specifially deal with the reduction of infant and maternal mortality rate. However,to signatory countries like ours, MDGs seem to be unattainable if policies targetting to respond to these items are not being given the highest priority. The position of the dominant religious group is seen as one the impediments to reaching the target, along with the lack of political will of the representatives whom we entrusted to act on our behalf.

While we always hear about the inviolable separation of the Church and the state, the position of the latter is more often than not dependent on what the former says. For certain, it can be argued that the Church is part of the state, and therefore it is their right to participate in affairs involving the community. Following this, it is their task and calling to influence the decisions of the state based on their doctrines and dogmas. This is very clear and quite understandable if their interpretations of the doctrines are being challenged by any proposed public policy, like that of the Reproductive Health Bill.

But the state is not the Catholic Church alone, and positions of other religions are equally important in a democratic setting. Congregations inside a given religion can also have varying opinions, representing a position of the hierarchy and not of the entire faith. While the positions of the people inside the Catholic Church is not solid as evidenced by the SWS survey in October 2008, where 76% of the members of the Catholic faith favored family planning education for the youth while 71% of the Filipino people surveyed around the country favored the passage of the Reprodutive Health Bill, the hierarchy’s position is irrationally feared by some legislators as having a potential negative impact on their stature should they choose to counter it.

Everyone has a say on this as part of the practice of democracy. It is their right to influence us in the same vein that it is our right to counter their influence by presenting a more convincing, practical stand. Their position should be respected, but to let them decide for the rest of us by not representing the real voice of the populace is but a betrayal. The real battle lies not in whose side we are on or whose voice is the loudest of them all, but in the analysis and decisions of the representatives of the State as they vote in favor of or against it.

In the case of absentee representatives whose names should be published for people’s knowledge as they don’t partake in important votations, like what had happened to House Bill 5043, the real threat is not the hierarchy’s position but our representatives’ inability to decide and take on the challenges of a position that should have represented the people got them their positions. The battle on the issue of RH bill’s significance to the lives of the people is over and has long since been decided by the people. What we await is for our representatives to act based on what is due and necessary. NOW, without delay!

If politicians abstain or absent themselves to escape involvement in the RH, they should be reminded that they are not Pontius Pilate. Even he had not escaped the call of the people, regardless of how great or ill their position was. For one reason, RH Bill didn’t make it to the last Congress because of absentee Pontius Pilates. To believe that one will no longer make it to the next race if he voted in favor of RH is clearly both a sign of incompetence and incapacity to think critically. Both reasons would make a fence-sitting official undeserving of their position, as one may opt voting for a religious though twisted opponent but equally principled as an RH advocate. They would be incompetent and undeserving because their sole concern is winning the next race while evading priority issues like that of RH.

They are also incapable of critical thinking, as arguments presented since the RH bill’s first filing in 1999 have been sound, valid, and compelling enough to put into law. While all strong premises in support and in contrast of RH were already given, only the belief of Catholic voters’ backlash overturned the efforts and statistics. However fallacious it may be, as survey studies do not support the claim and as evidenced by the winning of known RH champions last elections, the same will not prosper until our legislators decide in favor of the just and the truth. And the truth is that Filipino women and children die EVERYDAY because of issues our politicians are afraid to take a strong stand on.

Rights versus Hierarchy. Would they dare to care for those who are at risk of losing the chance to see a brighter tomorrow? How about you?