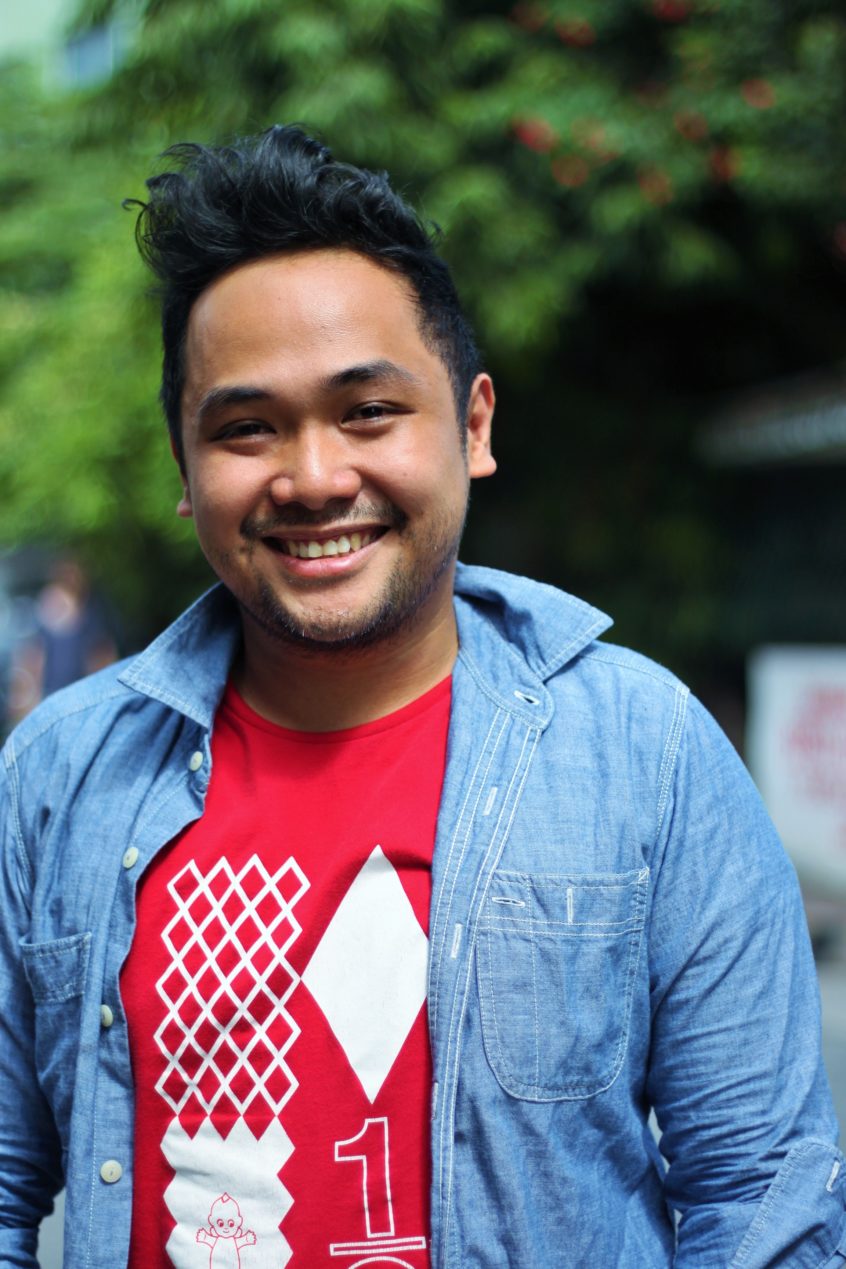 It was a time when all others chose not to speak up. A time when controversies dominated the near-end of then-President Gloria Macapagal-Arroyo’s term; a time when the upcoming elections promised not much opportunity for real change. Young performer JK Anicoche, together with others from his field, staged an unusual performance that would leave audience members shaken.

Masquerading as senators, bishops, and all sorts of public figures, the performers, dressed in grotesque costumes that ranged from a snake-like penis to nothing at all, screamed and cursed at the audience, wanting to prove how nothing could be more vulgar than the present administration. By the end of it, when everyone turned out dead, one wide-eyed viewer couldn’t leave without asking: “So ganun nalang ‘yun? Anong gagawin natin? (That’s it? What should we do now?)”

“Exactly,” JK recalls himself saying. “Anong gagawin natin? (What do you think we should do?)”

About five years since, one thing remains certain about JK—he can’t stand being silent. “Theater is created to start a discourse,” he says. “[It’s] a platform where people can confront realities… and imagine a different way of being.”

Now the artistic director of Sipat Lawin Ensemble, an independent performance-company he cofounded, the 29-year-old performance-maker, as he prefers to call himself, says he’s focused on devising new creative works that change the way it’s being done in the country. Looking at Philippine theater as an “industry,” he says, only fuels the popular opinion that theater is only for the enjoyment of the rich, rather than an exchange of ideas between the artists and the community.

A true activist by nature, he questions how most theater institutions—even government ones—tend to shell out a lot of money to put on spectacles, yet often leave their performers way underpaid. “It’s like wearing diamonds in the slumps,” he says, “We cannot go on with how commercial theater is doing it.”

Eventually JK reached a point where he decided to leave the “business” and start finding stories he thinks are actually worth telling. The path wasn’t easy; rejecting the conventions that commercial theater had imposed also meant a change in daily habits, lifestyle and overall way of being. What’s more, everyone in his world moved through the same rhythm: maintaining multiple part-time jobs or doing “sell-out” works in order to sustain the projects they really wanted to do.

Being young, and a well-trained actor, at that, surviving in such a world would have been easily within his reach. A graduate of the Mt. Makiling-based Philippine High School for the Arts, the country’s only high school dedicated to the arts, JK was rigidly trained in theater, giving him much more skill and knowledge compared to others in the field who were of his age. His abilities, which were further honed as he pursued a film degree in the University of the Philippines, were a perfect build-up to the successful commercial and television career he could have had, had he chosen a different path.

Yet, he says it was precisely the things he learned from both institutions that inspired him to shift from doing commercial to development work. Now, aside from creating large-scale interactive performances, JK collaborates with other fields, such as those in disaster risk reduction, and human rights. As one of his main advocacies, he helps them raise awareness while promoting literacy in underprivileged communities through storytelling. He also teaches directing courses in the theater arts program of his alma mater as his way of giving back.

The idea of being excellent for others, an obligation he holds in gratitude for years of being a scholar of the country, he says, became the overall guiding principle of his craft.

As a side-note, he still jokingly admits how artists like him tend to do development projects for others while always ending up with no money left for themselves. Asked whether he gets tired from living such a life, he simply answers: “It’s a struggle [but] it’s not as bad. [Art-making] is like breathing. Napapagod ka bang huminga? (Do you ever get tired of breathing?)”

On a grander scale, JK says there is still much to do when it comes to creating performances for the Filipino community. With eyebrows slightly converging, he expresses his frustration with how even the government sees it only for its tourist-centric appeal, and not for the potential it poses for societal development. A bit unfortunate, as he says he finds “it’s the actor’s capacity to transform on stage that reminds people of their capacity to change as human beings.” JK is a philosopher in his own manner by the way he seeks questions, seeks ideas—even dark ones—and asks them the best way he knows how: sharing stories.

One production he was a part of that operated on the same principle was the largely controversial BATTALIA ROYALE: Live-Action Game, which presented questions on morality, mortality, and violence. Many questioned the ethical breaches the artists allegedly made, since the primary objective of the game itself was for participants to kill and or torture one another. To those critiques, he simply answered: “To bring light into the darkness of men’s hearts—even if it means we create the darkness [ourselves, just so] people continue to strive to find that light… such is the duty of an artist.”

Theater, if made accessible, JK says, starts a dialogue that can lead to collective imagination, and eventually to collective action. Now, as the nation faces another chance to start fresh in the upcoming 2016 elections, it is a safe bet that this artist will not be keeping silent. At a time when the country continues to search for inclusivity, a society free from poverty, and an overall sense of community; at a time when there are still many questions to be asked, and a change to fight for, a man like JK Anicoche won’t ever run out of stories to tell.

One Comment on ““Finding and performing stories worth telling””