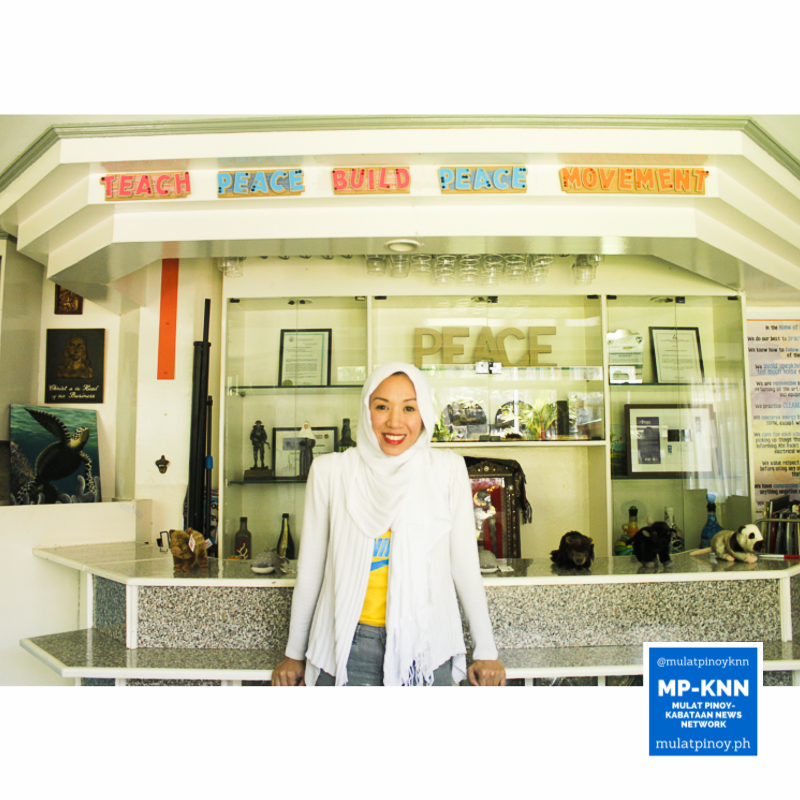 “Witnessing war itself made me strong about my conviction na I’m doing this because I don’t want more children to suffer from conflict,” says Honey Sumndad-Usman of Teach Peace Build Peace (TPBP) Movement | Photo by Marie Pauline Requesto/MP-KNN

In a timeline posted by the Official Gazette, land disputes between Christian immigrants and Muslim locales in Mindanao during the 1940 to 1960s erupted. The conflict heightened when the Jabidah Massacre was committed in the 1970s, where justice was denied the Muslims involved in the incident. According to reports, the incident led to the armed struggle and insurgencies in the Mindanao.

Honey’s background is a mixture of cultures. Her mother’s side is Catholic while her father’s side is Muslim. Her family left the Philippines when she was young, while her father worked as an OFW in Riyadh. At a young age, Honey witnessed conflict herself while living in Riyadh during the years of the Gulf War.

She still remembers the terror inflicted by the war. In a Huffington Post article, she recalls her experience: “I remember carrying our gas masks everywhere we went and staying in one room inside the house if we heard the siren that warned us that there was a missile coming.” Schools turning into evacuation centers are not unusual occurrences for her, especially in times of conflict.

Growing up in that environment, it became her advocacy to work for peace. According to her, the Gulf War was one of the most significant experiences in her life, and it shaped who she is today. The war made her understand the difficulties and threats of suffering from conflict.

A study conducted by the Bangsamoro Conflict Monitoring System shows that from 2011-2014 the biggest cause of conflict involving children was the presence of shadow economies in the Bangsamoro region. Shadow economies refer to incidents involving human trafficking, illegal drugs, firearms, kidnap for ransom, and investment scams. The report cites that children were kidnapped for ransom. Children were also harmed by RIDO (clan/family wars) practices. Moreover, children were also victimized by the armed conflict happening in the region.

Despite her experiences in the war, Honey considers them blessings because they led her life mission. Honey articulates, “Allah, the Almighty, gives us experiences for Him to lead us to the path He gave us—for Him to lead us to the mission that He wants us to take on. And for me blessing ‘yung pag-experience ko ng conflict kasi dahil dun napunta ako dito.” As part of her advocacy, Honey initiated the Teach Peace Build Peace (TPBP) Movement in 2013.

The Teach Peace Build Peace Movement is an organization that has a vision of making every Filipino youth a peace builder. Regardless of a child’s gender, ethnicity and religion, the organization aims to inculcate the importance of peace through arts, music and theater workshops, as well as games and sports.

Honey believes that conflict can be prevented by institutionalizing the culture of peace, which she describes as transforming a person’s mindset and attitude towards prevention and rejection of violence and living peace as a way of life. She is hopeful that the initiative will succeed and be passed on to future generations. “I am hoping that whatever ‘yung fruit of the toil that we’re doing now—the peace-building interventions, the peace-building programs that we implement in different schools and communities—in the long run it will help prevent conflict.”

Honey adds that discrimination and cultural prejudice happens because of the lack of knowledge regarding one another. That is why part of her peace-building activities is opening the lines to communicate and learn from people of different cultures.

As for the youth, Honey poses a challenge to deeply understand the realities in our society, and the context of everything that has been happening to make the youth realize the importance of engaging them in peace-building. “We have to immerse the young people kung ano ba talaga ‘yung nangyayari sa conflict areas and ano ba ‘yung mga different forms of conflict outside Mindanao… These are the realities and if we don’t do something about it, someday magiging problema ito ng society natin.”

This is why it is important for Honey and other peace builders to touch the hearts and not just the minds of people, because “from there, it’s going to be a beautiful journey for that person,” Honey explains.

Peace as a way of life is what she wants to impart to the future generations who have longed for peace in Mindanao.

(Additional information for this story was drawn from this World Bank study.)