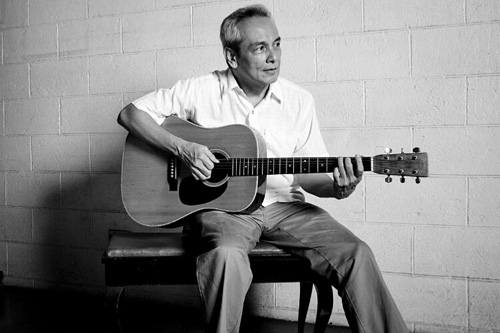 Are you having trouble pursuing your art? Have you always wanted to be creative and artistic but have somehow managed to hold yourself back out of fear or insecurity or a “busy” life?

Anyone can be an artist, according to Jaime Ramon “Jim” Paredes, a pillar of local music and the man behind “Batang Bata Ka Pa,” “Panalangin” and the iconic “Handog ng Pilipino sa Mundo,” which made its reputation as the anthem of the 1986 People Power Revolution. He is best known as one of the three OPM legends of APO Hiking Society, along with Boboy Garovillo and Danny Javier.

Here’s even better news: a lifetime of creativity is possible, too. In fact, Paredes says that being artistic or creative should not only be a facet of one’s personhood; it should, more than anything, be a way of life.

Paredes, clad in an off-white, slightly-wrinkled polo, dark blue jeans and rubber shoes, delivered his module on “How to be Creative for Life” to the mentors and campers of the Elements Music Camp 2013 during its graduation rites on November 21 at the Luce Auditorium in Silliman University, Dumaguete City.

The Elements Music Camp is a gathering of 60 aspiring and professional singer-songwriters, and over 20 mentors from the Philippine music industry. Elements aims to gather aspiring and professional singers and songwriters from various disciplines and provide them with a venue to learn, collaborate, interact, and create music in a natural setting. The workshop/camp is held annually in Dumaguete City.

Two years later, I am sharing what I learned from his talk: nuggets of wisdom that still ring true and are applicable even beyond the realm of artistry. These are lessons that are made for the biggest art form of all: life.

So how does one become creative for life? Paredes sums it up in “5 simple steps.”

Paredes says that this is “the most important step you can take to be productive, to be an artist and to keep being an artist.” He explains that all the artists who qualified for the Elements camp “are very talented but there are more talented people out there who did not apply; so, therefore, they’re nothing.”

“Compared to those who are more talented than you are, you have an advantage because you showed up,” he emphasizes. “Sometimes, it’s not the most talented who show up. There are very, very talented people out there who spend their lives saying ‘I could have been this, I could have been that’. Don’t be one of those people,” he says.

Paying attention, according to Paredes, is everything. “Paying attention means being present to what is happening out there,” he says. He mentions that it is only through paying attention that one notices all the minute details of life that makes it worth living – and these are the details that make great art.

Truth is value, says Paredes. The best form of art, he continues, is when “you create something that truly comes from you. And then you give it to the world and then you say, ‘This represents me.’” It is this “truth” in the work you create that makes you feel validated as a human being, he says.

Related:  PODCAST: How do cultural beliefs affect teenage pregnancy in the Philippines?

Paredes also admits that you will always grapple with fear along the way. But to that, he says: “Feel the fear but do it anyway…because in the pursuit of your art, you commit to something that you have no control of. And you say ‘yes.’ Yes to everything. Yes to life.”

And of course, Paredes says, the only way to truly be productive for life is if your keep practicing your craft for life.

He mentions the Indian concept of “satori,” the Japanese word for “enlightenment” in Buddhism, and he says that the moment you conceive the idea for a good song is a manifestation of satori. “Therefore, you have to keep doing your craft…in order to be more ‘accident prone’ to satori,” says Paredes.

After 41 glorious years in APO and 3 years as a solo artist, Paredes recognizes the value of dedication. “The road can become grueling,” he says as his speech nears its end, “but you just have to know what you want – whatever it is that excites you to your core, be certain about it, and pursue it ‘til your very last breath.”

The Elements Music Camp is now on its 6th year and looking for a new batch of singer-songwriters to join the camp. Learn more about the camp here.