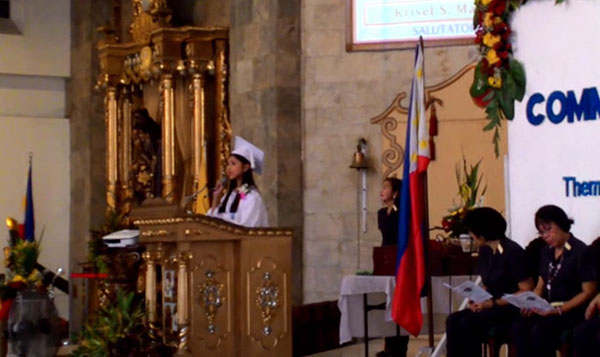 On March 21, a video of a high school salutatorian being blatantly and repeatedly cut off by a faculty member while delivering her speech in her school’s graduating ceremonies was uploaded on YouTube.  In just a week, the four-minute video had been viewed more than 2 million times. The story was picked up by most major broadsheets and broadcast shows in the country. Even a major international public service broadcaster got hold of the story.

Krisel Mallari then became a local buzzword and an online celebrity. To the Sto. Niño Parochial School and its supporters, she was the impertinent second-ranker who proceeded to deliver an unapproved speech and air out her grievances in an indecorous manner and method. To the valedictorian, she was once a friend who then became a very competitive batchmate who could not admit that “some things were not meant for her.” To some well-meaning individuals, she was a high-schooler who happened to be a victim of bad luck (for going through the injustices they, too, went through in their young years) but would do well to move on and “prove her worth in college.”

But you know who and what Krisel really was? She was the confidence and backbone this country never had.

Krisel pointed out that the emperor was naked. She was the 16-year old girl with a mic, a podium and the sensibility to articulate that even though we may live in a republic that claims to be a democracy, we have allowed ourselves to be enslaved by a nonhuman despot: a crooked system that continues to thrive precisely because we allow it.

If there is something that we all know too well and have been sweeping under the rug for too long, it is this: There is a flaw in our system. There is a flaw in the way we do what is supposedly prized as our “key to success:” education.

Our educational system is flawed on two levels that can be discussed based on circumstances both directly and indirectly related to Krisel’s case.

On a micro level, there is the specific but reverberating issue of transparency. The school, in a signed official statement, says: “Halos taun-taon tuwing matatapos ang school year ay mayroon complaints si G. [Ernesto] Mallari [father] at Krisel Mallari. Laging ipinapaliwanag at kinakausap sila ng paaralan tungkol dito (Almost at the end of every school year, Mr Mallari and Krisel Mallari have complaints. The school always has to explain and talk to them).” Krisel’s grades being made available to her and her family at the end of every school year is supposed to be a standard procedure. Why, then, must she and her father be antagonized for it?

Directly linked to the transparency issue were the queries raised on the total objectivity of the grading system. Krisel expressed her disgust at an allegedly unjust system and insinuated in her speech that she was cheated. In response to this, the school, together with the valedictorian and only after a 48-hour deadline by DepEd, released a statement saying that they would release Krisel’s grades pronto. But how would we verify the reliability of her grades when doubt had been expressed? Would the release of a couple of numbers inked on a report card suffice for transparency? How could a school claim full transparency for the more subjective aspects of the grading system, such as the invisible marks for class performance, good morals and conduct, leadership, and other extracurricular merits?

The injustices Krisel speaks of in her interrupted speech are currently being juxtaposed with a larger evil–corruption in government–and this has become a telling commentary on how schools are reflective of the grim “real world.”

High school English teacher Kristine Sydney from the United States, however, wrote in Rappler about how she disagrees, and she has it a point. She said: “The best schools should not be a reflection of the ‘real world.’ The world, as the news shows it, is corrupt, violent, and unfair. A school should be better and more noble than what lies beyond its gates.”

On a macro level, here’s a sad reality for Krisel and for all of us: Full transparency is impossible, be it in school or governance.

This is true for our current paradigm, but there is a way out: we need to challenge the status quo. We need to revolutionize the system.

We are all still currently readying for the blows we will be receiving from full K to 12 implementation, but even the K to 12 in itself is a naïve move. As educator and activist Sir Ken Robinson says in his TED talk, “What we need is not evolution, but a revolution in education: it needs to be transformed into something else.”

This “something else” is a student-centered educational system: a system that understands the needs of its students and recognizes their individual differences and potentials.

The biggest flaw in our current educational system is that it “manufactures” humans as if they are mere products that have to abide by principles of conformity and standardization.

We would do well to heed what Robinson further prescribes: We must do education the way we do agriculture: we must recognize that human development is an organic process. We must not restrict children by providing only a narrow standard for what is considered as “educated:” layers of degrees earned through written exams and rigid classroom setting. Like farmers to their crops, all we can do is create conditions under which they can begin to flourish.

Someday, a future Krisel Mallari would not have to worry about transparency and grades because the standard of education would be the learner herself: how much she had worked her way towards achieving her fullest human potential, and how much she had used that to create something of value for herself and for the world around her.