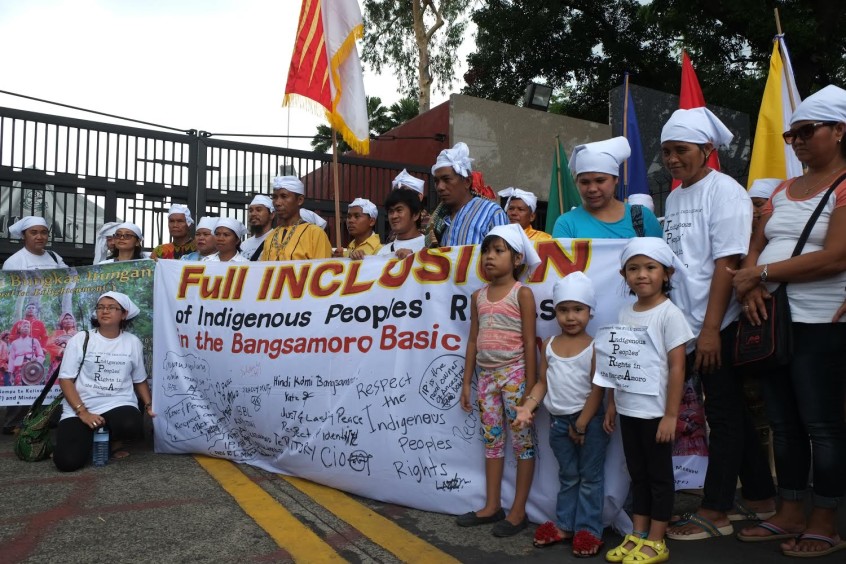 We are organizations from different sectors and advocacies that have been supportive of the peace process between the GPH-MILF. We share the dream of genuine peace in Mindanao that would be enjoyed by all the peoples in the region.

We recognize that the passage of a Bangsamoro Basic Law (BBL) is a critical step towards achieving peace. This is why we have engaged the members of the Congress by participating as resource persons in the hearings, submitted position papers, and have had discussions on the critical points that would make the draft BBL truly inclusive and an instrument of correcting historical injustices in the region. We have pushed for the full inclusion of Indigenous peoples’ Rights in the BBL.

The amendment approved by the Adhoc committee of the House of Representatives on the transfer of Ancestral Domains/Ancestral Lands of Non-Moro Indigenous Peoples from exclusive power to concurrent power is a positive development that we recognize. This amendment articulates the recognition of “their ancestral domains and their rights thereto.” Further it states that “The Bangsamoro Government and the National Government shall cooperate and coordinate through existing national laws such as Republic Act No. 8371, otherwise known as the “Indigenous Peoples’ Rights Act of 1997,” to create policies for the identification, delineation and titling of ancestral domains.” (Sec. 2, Article V)

There are contradictory provisions in the amended version approved by the House Adhoc Committee that could seriously undermine the rights of Non-Moro indigenous peoples. While Article V, Section 2 has been amended making the creation of policies on ancestral domains part of the concurrent powers shared by both the National Government and the Bangsamoro Government, Section 3 of Article V on Exclusive powers maintains that the Bangsamoro Government shall exercise exclusive powers on Ancestral domain and Natural Resources.

Furthermore, there are provisions in the proposed BBL and retained in the version approved in the Adhoc version that effectively repeals some IPRA provisions. For example the provision in Article V Section 4 (other Exclusive Powers) gives the Bangsamoro Government exclusive powers “to recognize, constructive or traditional possession of lands and resources by indigenous cultural communities subject to judicial affirmation.” The premise of judicial affirmation is that all lands are public lands. This effectively contradicts the recognition that some domains are ancestral hence private but collectively-owned, which is the basis for the issuance of Certificates of Ancestral Domain Titles or CADT.

At the heart of the demand for full recognition of IP rights is the identity of the non-Moro Indigenous Peoples. For without identity, it is as if their entire being is erased. And it is from a people’s identity that rights emanate from – their right to ancestral domain, cultural integrity, governance and justice system.

However, the definition of Bangsamoro People in Article II diminishes the distinct identity of the non-Moro Indigenous Peoples, by subsuming all the “natives or original inhabitants of Mindanao and the Sulu” and their “Spouses and their descendants” as Bangsamoro. This clearly denies them their collective identity. Section 2 of the same article, Freedom of Choice, says that “other indigenous peoples” can choose their identity. But as the Lumad leaders say, being Teduray, or Lambangian, or Erumanen Manuvu, is not a matter of choice. You are born with your identity. Rep. Act 8371 or the Indigenous Peoples Rights Act (IPRA) has a clear definition of who the Indigenous Peoples are.

The Indigenous Peoples have been betrayed by the Aquino government. The deliberate non-inclusion of the non-Moro IP rights in the draft BBL version from the peace panel is a clear act of discrimination.

We urge the members of the House of Congress and the Senate to not let historical, cultural and social justice elude the non-Moro Indigenous Peoples once again. As legislators tasked to enact this historic law, you hold the key for this new chapter in Philippine history to progress, and the responsibility to correct historical injustices. We demand careful and thorough deliberation of the draft BBL. The benefits and consequences of this law go beyond this generation.

We appeal for public support in this endeavor to uphold the rights of our non-Moro IP brothers and sisters.

There will be no peace and justice in Mindanao without the full recognition of the rights of indigenous peoples.