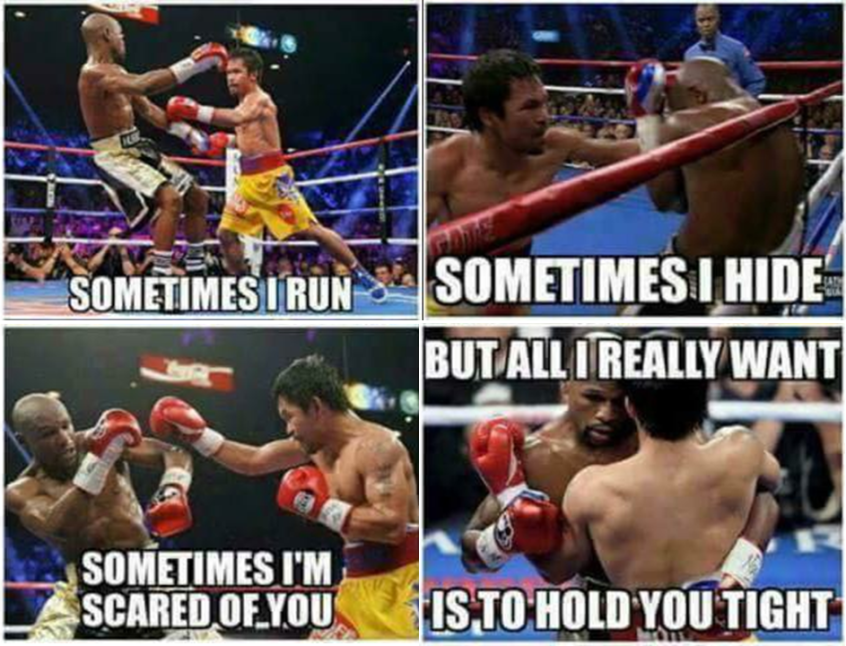 The “fight of the century” has been tagged as the most expensive fight in boxing history, but in terms of social media reactions, it broke the Internet because of the memes and hashtags. Some were funny (like the meme below) and pointed out the obvious that Floyd Mayweather Jr. just ran around the ring for 12 rounds. Some, however, were just downright offensive. 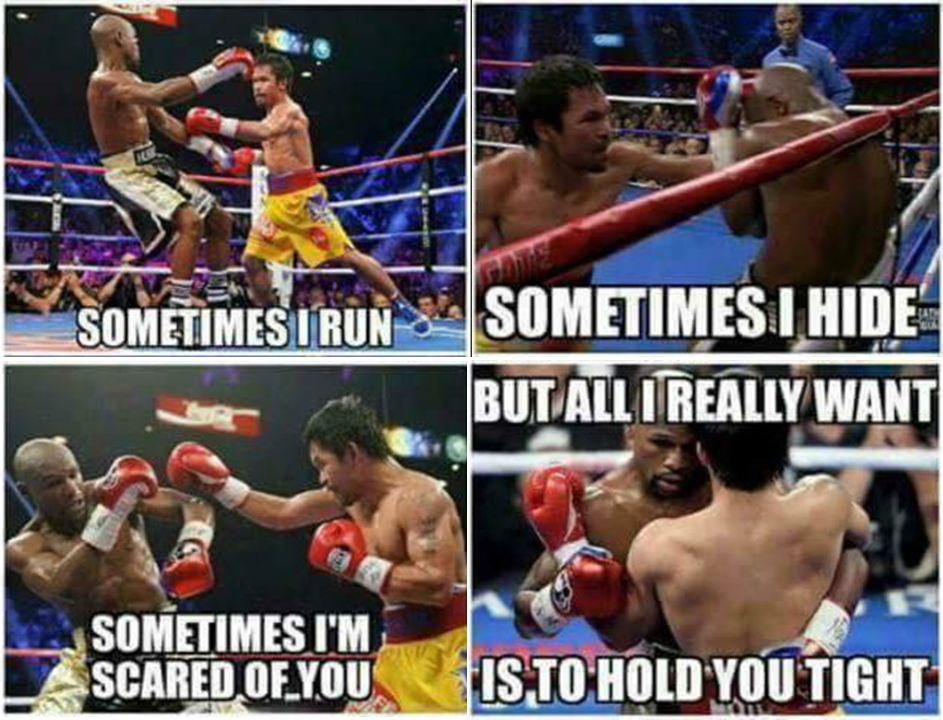 “Mayweather clearly has a vagina,” one local celebrity said over Twitter. Another tweeted that Mayweather’s black eye and bruises could not be seen because of his skin color. Sexist and racist comments from netizens, even from people you wouldn’t expect such as celebrities, circulated around Facebook, Twitter, and Instagram.
It is true that their comments were very out-of-this-era and backwards, but let’s not be quick to condemn these people.

Most of the comments were posted those directly after the fight, when emotions were running high and people’s ability to decide were not at their best. They were hurt, and hurt people hurt people. Maybe it was their way of avenging Manny Pacquiao; their hearts got the best of them.

People still forget the old social media rule: “think before you click.” This isn’t to defend them. They are still clearly wrong, but it would also be good to consider the situation they were in when they posted. Instead of bashing them as well, why not take the opportunity to educate them?

If there was anything good that came out of this, it was the comments that came after the offensive posts. Other people, even their closest friends, called the negative posters out for their ad hominem comments and attacks that were on a personal level. Social media became a platform for people to create discourse on not just gender sensitivity issues, but also about being critical on why Pacman lost. At that moment, the discussion was raised to a higher level by looking at the fight on different levels, such as the nature of boxing and the politics of it all.

Related:  #IWD2015 Celebrations in the Philippines and Worldwide

You know that people are using social media right when these happen on your Facebook timeline or your Twitter feed. Those who posted the insensitive memes and were called out have likely learned a thing or two about gender and race sensitivity; maybe they will be more careful about what they post the next time. Some of them even removed their posts, and let’s hope this is because they acknowledged that they were offensive. It’s still up to the people, however, whether they would be open-minded about it or not.

Traditional media such as GMA, ABS-CBN, and TV5 even reported these memes. Yes, it was entertaining, but what surprised me about these reports was the lack of post-processing and evaluation about the posts. The news outlets reported on them as if just to laugh about them.

Reporting is one thing, but being sensitive to the viewers is another. It is not too late to educate the viewers.

It is a sad fact that even though it’s the 21st century, people still use “gay” as a derogatory term. Same with being black; greatness is never determined by your skin color. People today should realize that being of a specific gender or race does not make us any less or any powerful than the other. We are all fighting for the same cause: respect.

Youth Reporter at MP-KNN
Nicko is a Malikhaing Pagsulat sa Filipino major at UP Diliman. Aside from being a youth reporter for MP-KNN, he is also the editor-in-chief of Kalasag, the student publication of CAL. He was also a creative writing major at the Philippine High School for the Arts.