A team of student social designers from the Silliman University (SU) won a national social design competition with an innovation that aims to address the dropout crisis: “The Bamboard Game Project.” 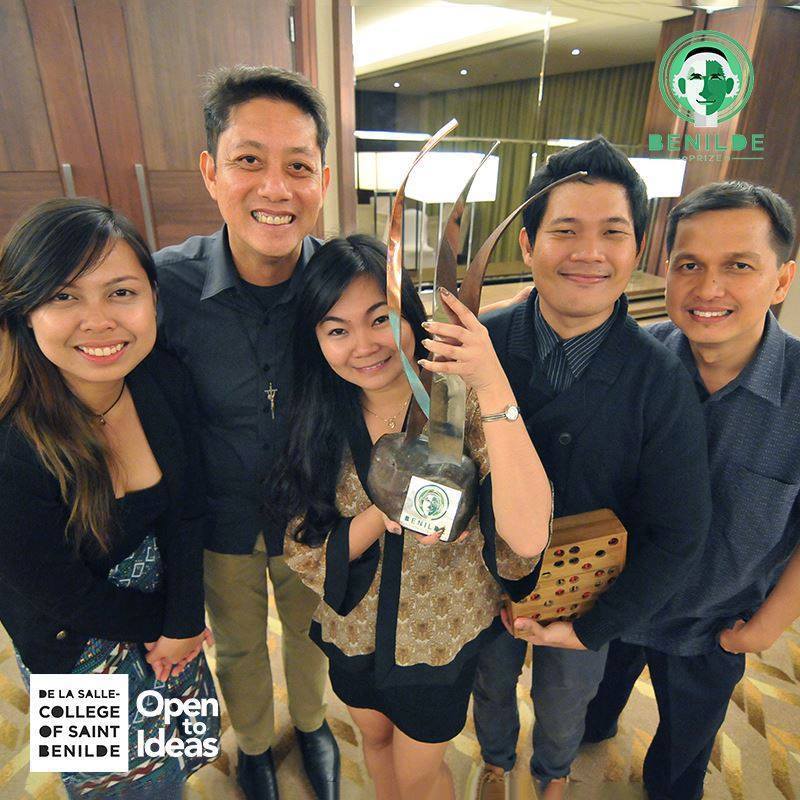 The team received P500,000 in grant money and a trophy designed by renowned sculptor Ann Pamintuan, who also happens to be a Sillimanian. Computer science and mathematics major Khail Santia and mass communication juniors Queenie Maria Guibao and Cindy Bonachita comprised the team. SU alumnus and businessman Bron Teves served as their adviser.

The Benilde Prize for Design Excellence, presented by De La Salle-College of Saint Benilde, is the first student competition devoted to “social design”—the practice of creating innovative and inclusive design solutions to today’s most urgent social problems, and a rising buzzword in our developing nation.

The Bamboard Game Project bested 64 other entries from all over the Philippines.

The dropout crisis and its unexpected major cause

The team called the rising dropout rate in the Philippines “a national calamity.”

“UNICEF statistics told us that more than 800 thousand elementary schoolkids were dropping out of school every year. Most of the dropouts are poor,” the team explained. “By dropping out, these kids were forsaking–for most of them–their only chance out of poverty.”

As young kids, Santia, Guibao and Bonachita knew how it felt to be disengaged learners. “We know how it feels to lose interest in learning because of a system that does not always understand our needs and often discriminates based on rigid standards of test scores and inflexible classroom limits,” the team said.

School, according to the team, was a lot like “torture.” However, they would always run to one thing that meant anything but torture: the fun in games.

Santia, who has been designing award-winning mobile games for almost a decade, then challenged himself: “How can I harness the power of game design to create an educational system not built on coercion but on the joy of learning?”

The project’s core: The Bamboard Game and “fun” math – finally

After countless sleep-deprived nights that stretched to weeks and months on end, “The Bamboard Game Project” became a reality.

The entire project as a full-fledged social design has three prongs: 1) The Bamboard Game; 2) The Livelihood Project; and 3) The Bamboard Social Enterprise.

The project’s core element is the Bamboard Game – a game-changing game design that has turned the impossible into a reality: teaching and learning math can now be fun. 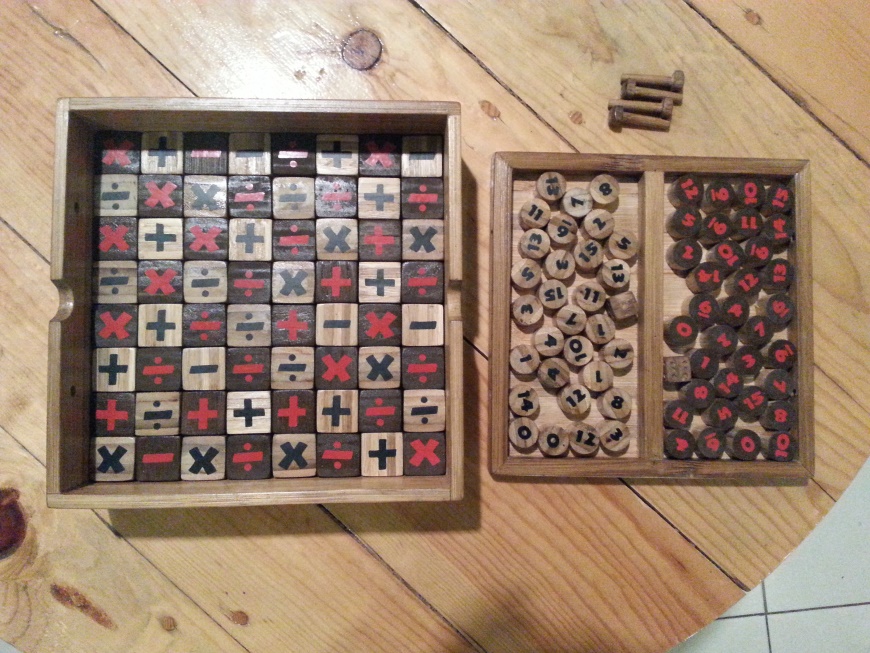 The Bamboard Game is the only game design of its kind that can transform into 12 of the most familiar board games (including chess, tic-tac-toe, and snakes and ladders, among others) while incorporating math. The team says, “Kids don’t even know they’re solving thousands of math worksheets while playing!” | Photo by Khail Santia

Doubtful? Here’s how it works:

The gem of the Bamboard is that it combines (currently) 12 of the most familiar kids’ games: Snakes and Ladders, Tic-Tac-Toe, Boggle, and even Chess, to name some. It then incorporates math into each game in a way that is so stealthy that players won’t even know that they’ve been solving “thousands of math worksheets” in one playthrough.
What even makes the game more innovative, the team said, was the fact that the Bamboard comes with customizable cubes and pegs that contained all the basic math operations. Players can then customize the game to suit the mathematical skill that needs to be learned. The board game changes itself to aid in the ladderized learning of all basic math processes: from basic addition to the more complicated combination of operations and application of properties.

“The beauty of the Bamboard is that it evolves with your child – like a trustworthy old friend. It stays by the children’s side and shows them that math is fun; that learning is fun; and that staying in school is actually worth their while,” the team said.

The Bamboard also fosters greater social interaction among pupils since each board game can accommodate 1 to 6 players.

The team’s goal is to provide each public elementary school in the country, as their primary beneficiaries, with at least 60 Bamboard units which will be distributed among Grades 1 to 6 pupils.

“We’re targeting Grades 1 to 6 because these are the stages where our negative biases towards education are formed. These formative years are where we usually initially internalize that ‘Math is torture’ or that ‘School is boring.’ We want to stop these notions at the roots.”

The team also stressed that they want to bring the Bamboard first to technologically marginalized communities: to public schools where most of the poor kids are. They can then market the Bamboard to private institutions and to middle- and upper-class families.

Santia also remarked on a suggestion by one of the final round jurors to make an app version of the game: “We can see the potential benefits of an app version. After all, lack of engagement in school is not confined to the rural areas but inflicts urban children as well. So this definitely is an avenue for growth. Moreover, unlike a board game, apps have very little distribution cost which will allow us to reach a global audience more quickly.”

The bamboo, the livelihood project and the social enterprise

Aside from its educational thrust, The Bamboard Game Project also creates ideal market potential that supports the growth of the bamboo industry in the Philippines. The Bamboard is fully made out of bamboo.

“Not a lot of people know that the bamboo is one of the most sustainable plants around. It gives off more oxygen than most plants; provides better hold of the soil to prevent erosion; grows back when cut and actually benefits from trimming unlike most trees; and, when processed properly, is even stronger than mahogany and will last for decades,” said Ms. In-in Teodoro, co-owner of Dauin’s Bambusa Collabo and one of the team’s advisers. “The bamboo has almost unlimited potential. We know so little about what could be our greatest national treasure,” the team said.

In addition, the project also has a livelihood arm that will train out-of-school and out-of-work community members to manufacture the Bamboard, thereby giving them a chance to provide for their families and to send themselves and their kids to school.

As a whole, the project is also a full-fledged social enterprise: one that aims to generate a steady flow of income that can then be devoted to maintaining the company and making sure that the Bamboard will reach every school in the country. Once “The Bamboard Social Enterprise” is in full operation, the team said that they can devote 10 percent of their income to “The Bamboard Fund.”

The team said that they also plan to tap local and global agencies and organizations to “adopt a school” for which they will subsidize the cost of the Bamboard units.

The Benilde Prize for Design Excellence: An initiative worth pursuing

The team is grateful to De La Salle-College of Saint Benilde (DLS-CSB) for pioneering the effort to cultivate “inclusivity and innovation in our community.”

Related:  More than Remittances: Tackling the Social Costs of Migration

The competition lasted from March 9 to 12 at the DLS-CSB School of Design and Arts. All teams were housed in the Hotel Benilde Maison de La Salle and all living and food expenses were paid for by the organizers.

“The entire competition was well-thought-out. The boot camp pushed us to our limits and it was pretty helpful. It made us further understand the core of our advocacy. The mentors were awesome and we’re quite thankful that they taught us on how to excellently deliver our pitch to convey our ideas about the project,” the team said.

The team also emphasized that the most important takeaway was “human-centered design.” “Human-centered design taught us to remember that, more than anything, we were creating solutions for real humans with real needs. We, as social designers, had to learn to see things from the eyes of those who were directly affected by the problems we were trying to solve. We learned the value of empathy,” the team explained.

DLS-CSB President and Chancellor Br. Dennis Magbanua said: “…if we can’t be the light, we can be the spark. This is what the Benilde Prize is all about. We strive to inspire others, and we allow others to inspire us as well. Benilde shines as a beacon of innovative thinking and creative talent. I think we have the responsibility to share and give back our resources for the service of the community through excellence in design.”

What’s next: The win is just the beginning

In addition to the trophy created by Ann Pamintuan and the half-a-million peso grant money, the team will be given the chance to implement their prototype under the guidance of their mentors for six more months, and gain potential collaborative arrangements with corporate, individual, and government partners.

The team left a few words to aspiring social designers: “We are yet to prove ourselves as social designers but we think the Bamboard Game Project reached this far because we started out with a purpose that deeply resonated with us, something that we cannot not do – to do whatever is in our power to help alleviate the national calamity of 800,000 elementary kids dropping out every year. We inventoried our resources, both personal and communal, and made a realistic plan. It might not be the absolute solution, but it is a solution within our capacity to execute. We quickly made prototypes of the Bamboard because prototypes win arguments, within ourselves and those we need to convince. Finally, where we are lacking, we did not hesitate to ask people for help and proceeded only with those who believed in the project and shared the passion.”

In the competition’s final round, the team capped their presentation, complete with a moving video and equally moving background music, with this statement: “The Bamboard Game Project is a primary step to revolutionizing the educational system, to bring together what we thought were mutually exclusive concepts: board games and education. We want to organically make our way towards student-centered learning in the Philippines, towards an education system that understands the needs of its students. We want kids to stay in school not because they ‘have’ to but because they ‘want’ to. And we want this love for learning to propel them into flourishing as a Filipino nation that is just like the bamboo–a nation of kaleidoscopic versatility and unwavering resilience.”