We all have fun memories of summer: family reunions, trips to the beach, and cold refreshments that relieve the heat. But do you remember your summers to be as hot as what we’ve been having for the past years? NASA has reported that 2014 was the hottest calendar year on record, and that even when eastern parts of the US had cold weathers, large parts of North America and Asia experienced nearly off-the-charts heat. 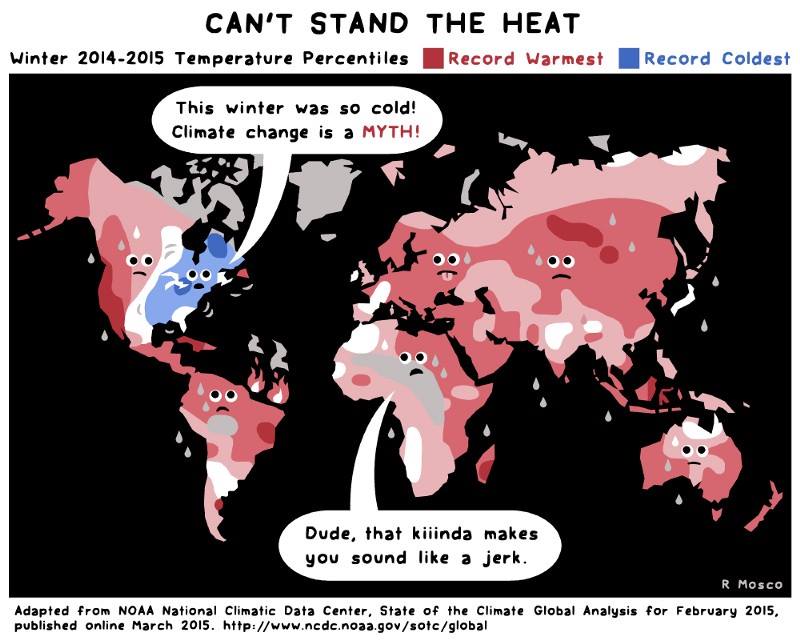 Cartoon by The Nib

The fluctuations in temperature supercharged typhoons that came our way as well. We’re quite lucky last week that Super Typhoon Maysak, initially a Category 5, weakened and fizzled to a tropical depression when it entered PAR as Chedeng. But Vanuatu, an island state in the Pacific, had to endure Haiyan-like Super Typhoon Pam barely a month ago and ironically around the time world leaders gathered in Sendai, Japan for the third United Nations World Conference on Disaster Risk Reduction (WCDRR).

Why should we be interested in Vanuatu? It’s because it’s ranked by the UN University’s Institute for Environment and Human Security as the most disaster-prone nation for four years in a row, bumping the Philippines off to second place. Both nations are island states, and our country only bested Vanuatu because the latter’s relatively smaller land size makes the whole nation susceptible to every storm. The study also points out that Vanuatu lacks coping capacities.

It seems like most of these global phenomena are out of our control, but we have to remind ourselves that it’s human emissions that contributed to these natural disasters. Can we reverse it? A strong case is to bring all the carbon dioxide in the atmosphere back to the soil, but we can also lessen the carbon we emit in the first place.

Developing cities like Metro Manila are deemed to have the greatest opportunities to curb energy use through good urban and transportation planning. Sustainable transportation initiatives to lessen car use, promote inclusive mobility, and encourage telecommuting to decongest roads and decrease our carbon footprint are long overdue. We’d love to see companies and institutions encouraging these among their employees and constituents. The Philippines is also catching up with the rest of the world in using renewable energy and advocates are reaching out to more people so they have a better understanding of what we’re all facing and what our options are.

As People’s Climate March organizer Ricken Patel said, climate change is an “everybody issue” now. In the end, we all want to enjoy our summers without risk of heatstroke and free from worries about stronger, bigger typhoons for the rest of the year.

Online Community Manager at MP-KNN
Rocel is an experienced writer, editor, and creative director. She is a graduate of the Certified Digital Marketer program from the Internet and Mobile Marketing Association of the Philippines (IMMAP). Her work for MP-KNN encompasses the project’s website and social networking presence, facilitating online interaction and info sharing.