Welcome to the Philippines, an English-speaking, Catholic country with Latin American practices and great obsession with American life. Too simplistic? At the very least, we can agree that it’s a convenient way to capture the many influences that brought about such confluence this side of the world, yes?

If you’re looking to get a glimpse of how complex social issues have been in the country, read this article published at the Huffington Post. Written by academic, policy advisor, and author Richard Javan Heydarian, the story revolves around the disconnect between the supposed advantage of being a colony of the West and the lack of real progress and prosperity among its people.

A closer look at the country, however, reveals a fundamental paradox: centuries of Westernization has not led to genuine modernization, while years of rapid economic growth haven’t brought about prosperity for the majority of the people. The country continues to remain as a semi-feudal (especially in rural areas) society under the grip of a vicious form of crony capitalism. Formal ‘electoral democracy’, in turn, provides a comfortable veneer of legitimacy (for the political elite) and an illusion of egalitarianism in a country mired in poverty and glaring inequality.

Indeed, the country’s poverty incidence barely improved in the past decade despite robust growth in the Philippine economy. In fact, the actual number of families living under the poverty line increased, primarily because of population growth. 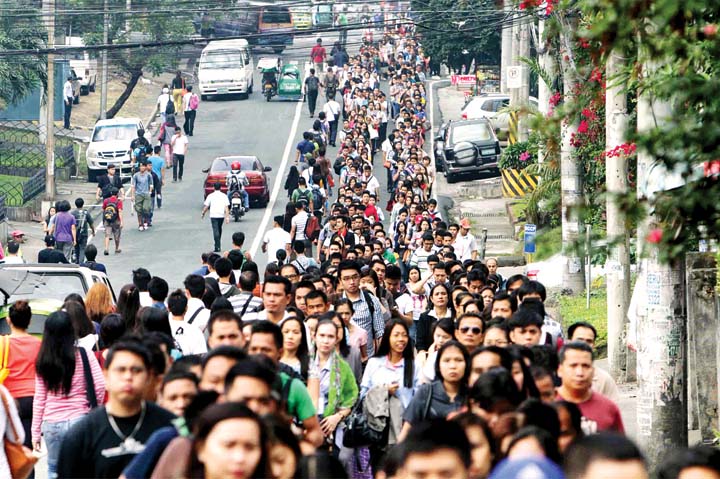 People lined up to ride the MRT. It’s just another day in Metro Manila. (Photo by Mark Balmores)

The gap between the rich and the poor continues to widen, with the oligarchs controlling business and partisan politics taking over a government that has yet to mature and improve in its systems and service.

The Philippines, shaped by its colonial legacy, has emulated Western lifestyles and urban architectures. But it has not truly modernized, at least in the Weberian sense.We are yet to see truly rational, impersonal state institutions, which stand beyond patronage and personalized politics. Even much of the business sector is dominated by few old families, so it is preposterous to talk about “free market” competition.

He continues to point out how much of these standards of modernity the country lack.

Modernity isn’t about speaking English per se — or any global lingua franca for that matter. It is also not about having big shopping malls, wearing global brands, and preaching liberal socio-political values per se. Those are only manifestations of modernization, not the core of it. Modernity, above all, is about placing efficiency, meritocracy and knowledge above connections, patronage, and discredited traditions. This is precisely why many of the Philippines’ neighboring countries, which have held onto much of their cultural heritage, stand as significantly more modern and prosperous: Social mobility, merit-based success, and knowledge-intensive productivity are incredibly more visible in places such as Taiwan or South Korea than the Philippines.

The article sure did ruffle some feathers (check out the Comments section below the article). It is certainly not the first time that these issues are pointed out, but the reason why these observations are still made because the issues still exist, if not too glaring to not notice.

What do you think of the author’s opinions? Share us your thoughts!