I was a wallflower in the past, and maybe, a little bit, I still am.

I observed how my classmates, back in elementary school, always teased other classmates about having a dark complexion, or about being fat. They would be called “Negro,” “Ita,” “baboy” and other names: names that weren’t supposed to be derogatory terms, but became so because of the meanings attached to them.

I felt uncomfortable having to witness scene where those words meant to offend our classmates were bounced off each person like a game of ball. Whoever cried out first was out, and then branded “pikon” for not being good sports.

That game is still played today, even as we are all “mature adults.” The game has become more subtle and more discreet over my years growing up, and unfortunately, so have its consequences.

Even mass media participates in this game. No wonder, then, that there is not a single person in this world immune to body dissatisfaction. We all have our own insecurities, and I commend those who make an effort to see the positives rather than focusing on the negatives. It is a much better outlook in life, don’t you think?

Now, I am not saying that you should lie to yourself. Personally, I do not believe in faking it until you make it. I do believe in acceptance. It is a very important step if you want to break up with negativity.

Sometimes, when I look in the mirror, posing for an #OOTD selfie, I think that if I have a thigh gap, my whole life will be better. This thinking is so wrong on many levels.

The first level is that I am convinced being thinner is better. Why do I have this line of thinking? Why do we think that being thin is better? I blame the media. They have these rules dictating how a fit woman should look. Magazines feature tall and thin girls, all glammed up; teleseryes on TV have main characters that are muscular men and mestiza women.

Even if it isn’t deliberate, media has set standards of its own and the masses are somehow forced into this mentality that thin is beauty, white is beauty and so on. This is called the socialization process, or the assigning of signs and symbols to an object as a means to connect with the masses or a variety of people.

This is an attempt to establish common ground with the public, believing that media can touch people’s lives by doing so. We are unconsciously adapting to the socialization process of the media. But I refuse to be a zombie to the media. I know we all refuse to be.

The second level of wrongness is in the exaggeration “my whole life will be better.” We may have shallow thoughts once in a while. We have this tendency to judge a book by its cover, and this is true as the line in the movie, The Ugly Truth, goes: no one falls in love with personality at first sight. Harsh, but there you go. 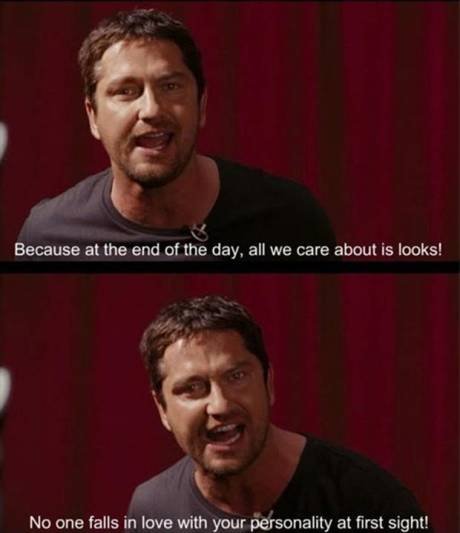 “No one falls in love with personality at first sight.” #harsh

I do care for my appearance. I admit that I’m a beauty junkie. I love fashion, I love make-up. Does it make me shallow? No. I fancy dressing up because it makes me feel good. And I also like to think I am more myself with make-up but with the “volume turned up,” just like what Park said to Eleanor after her make-over in the novel Eleanor & Park. 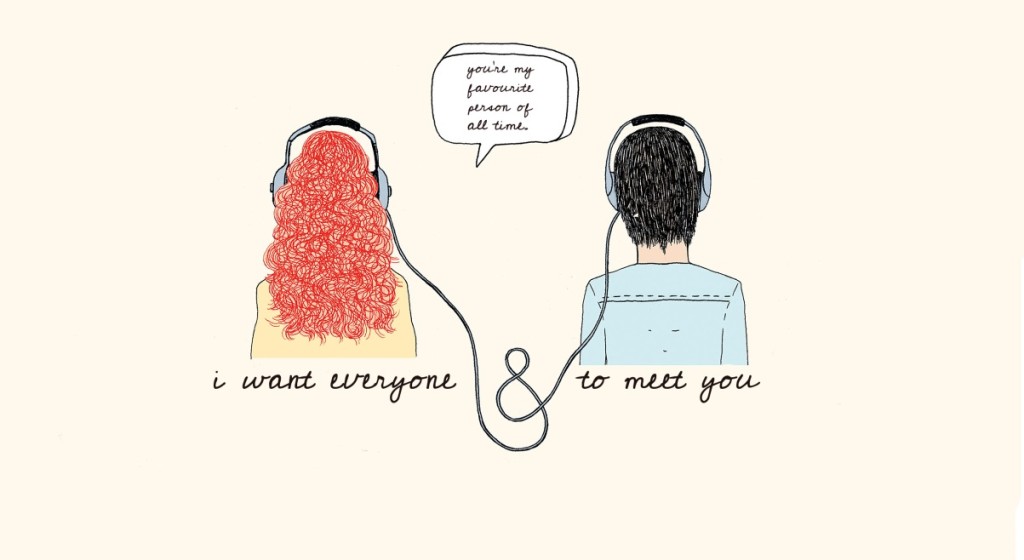 “I want everyone to meet you. You’re my favorite person of all time.” | Eleanor & Park by Rainbow Rowell

Wanting to dress up is a different matter, I believe, and it is not shallow. It is only shallow when we care for appearances more than the important shiz that is going on with the world, like world peace, perhaps. Isn’t that what people say they always want, especially in beauty pageants?

We are human, though. So, being shallow sometimes is permissible but we must not indulge.

There are still many levels I can think of aside from what I have mentioned, but all are rooted in body dissatisfaction. Wanting to change something in our bodies and appearances may be normal for some, but for others, especially teenagers, it is an everyday struggle. The others I speak of fight hunger or over-exhaust themselves with exercise to lose the nonexistent fat that they believe they have in their bodies. These efforts may lead to subtle and discreet consequences.

Subtle and discreet are much more dangerous. Think about the sicknesses and diseases without symptoms: they are the ones doctors say we have to watch out for, because we may never know if a virus is already all over our bodies or, how far gone we are because we don’t see it coming. Well, the consequence of the game is like this: it slowly contaminates us. It is subtle and discreet.

Teenagers are the most susceptible to them because an eating disorder is a psychological matter that can also be a health issue. Because teenagers are still in their formative years, they have growing bodies that need to ingest the right amount of nutrients in order for their bodies to develop. An eating disorder can disrupt your healthy diet or eating habits, and can over-exhaust you during physical exercises. Added to this is the pressure to be perfect, as dictated by mass media and our society.

If we focus too much on how we look and how much we weigh, then compare ourselves to the “beauties” on TV and in all the magazines to the point of obsessing, then we may be in danger of developing an eating this disorder.

Aside from these factors, an eating disorder is a sibling of depression. Anorexia nervosa is the most common eating disorder that seems to proliferate among teenagers, especially the girls. It is a diagnostic label that can result in a state of pitiful emaciation resulting from self-starvation, which is due to the person’s need to stay thin or the fear of getting fat (Wurtman & Wurtman, 1979). One of the symptoms observed is their angry refusal to eat, which may result in maintaining extremely low weight.

Bulimia nervosa is also an eating disorder, and what sets this apart from anorexia is that the person with this disorder eats excessive amount of food. This is then followed by self-induced vomiting because of guilt. Have you watched the movie Center Stage? A character there, a prima ballerina, is bulimic. She feels the need to maintain her weight because of the pressure of being a star.

“Now all they see is the wrong body type.” ~ Jody Sawyer | Screengrab from the movie “Center Stage”

Another eating disorder is called binge eating. We use the term “binge” loosely: binge watching, binge drinking, and binge eating. The disorder, however, is of course much worse, as it is the act of eating an excessive amount of food over a short period of time, with episodes marked by feelings of lack of self-control (Diagnostic and Statistical Manual of Mental Disorders-5, 2013).

People with this disorder eat excessively even though they do not feel hungry. We may have heard the term “binge eat” usually from those who are fresh from a break-up from a relationship. They say they can’t do anything but eat. That is similar to the actual disorder, but at least the former person has a reason to binge, and that is the break-up. The person with the disorder does not need any reason to binge.

The Diagnostic and Statistical Manual of Mental Disorders, or DSM, has all the information on feeding and eating disorders. The information is continuously updated according to the research and studies being done to better represent the symptoms and behavior of patients with disorders. However, there are also a few testimonies from people with eating disorders, and the survivors that said that the symptoms identified by DSM are not always accurate. They say that the symptoms differ from one person to the other.

Here’s video on eating disorders that I find very informative. Ron Lit is actually a booktuber (one who makes videos on YouTube about books). I’ve been following her since last year, if I remember correctly. It was quite surprising for me to stumble upon her video about body positivity and eating disorders, and I really commend her for sharing her first-hand experience.

Ron Lit has also made a follow up video about body positivity.

Ron Lit makes many good points in her latest video about body positivity. One that I particularly like is “curating media.” It is a given fact that media has a big effect on the masses. We see the symbols and signs that media uses as indicators of the ideal state. We recognize the gap from the actual state that we are in from the perceived ideal state with the help of media.

Well, thanks media. Really appreciate it. Not.

Ron gives us a tip: you can choose not to be a slave to media by curating it or filtering it. You can start by not picking up a magazine that you think that can make you feel bad about your body. Stop watching shows that will make you think “I hate my complexion, I hope to have that fairer skin” and such. There is nothing wrong with wanting a fit body, but there is a line between being obsessed and depressed about not having that fit body, and being motivated with a positive outlook on achieving your ideal body.

Honestly, I want my body to be on the petite side, so when I feel like I am gaining or about to gain a couple of pounds, I can do a few exercises to maintain my desired weight. There is nothing wrong with wanting something, really. We should, however, be ready to accept that nobody is perfect.

The pressure of being “perfect” that is set by media and society through the socialization process puts pressure not only on girls, but also on guys. Boys think that being manly requires muscles, therefore those without abs are considered devoid of manliness and excluded by the society of men. It is okay to want to be more muscular, but it is also okay to have a lean body.

As for the ladies, the same thing goes for you. Thin or fat, tall or small, you are beautiful. Yes, every night we wish that when we open our eyes the next day, our pimples would vanish, that our skeleton-like bodies would become chubby or muscular, and so on. It does not work that way. We have to accept who we are, and be confident in our own skin.

To quote my favorite author, Holly Black, from her novel Tithe: “Crippled things are always more beautiful. It’s the flaw that brings out beauty.” I have never denied myself the truth, and I can shamelessly say that I am full of flaws, but I am justified and accepted by God, and that helps me love myself the best way I can.

So. How do we want to look good for our #OOTDs and selfies? For me, it’s all about the positivity. It’s all about our outlook in life. Seriously, when you feel good inside, it shows. It is not just a saying. Smile a little inside, feel better, feel loved.

Youth Reporter at MP-KNN
Michiko Buot is a BS Development Communication student at University of the Philippines Los Baños. She is a Christian and a member of JIL-KKB (Jesus is Lord-Kristyanong Kabataan para sa Bayan). During her free time, she likes to read young adult novels, draw fan art, loiter around fashion and book blogs, and update her Instagram.