Is AIDS an epidemic in the Philippines? How are our #PinoyYouth affected by this phenomenon? On 1 December 2014, on World AIDS Day, youth leaders joined policymakers, development partners and other stakeholders in a Town Hall meeting to discuss challenges in the HIV response in the Philippines, with special focus on how children and adolescents can have better access to HIV prevention and treatment programmes and services that can save and improve their lives.

The forum “Youth, Health and Rights Town Hall: HIV, Sexual Health and the Law” is organized by the National Youth Commission (NYC), with the support of the Joint United Nations Program on HIV/AIDS (UNAIDS), the UN Population Fund (UNFPA) and the UN Children’s Fund (UNICEF), with live social media coverage by Mulat Pinoy–Kabataan News Network. 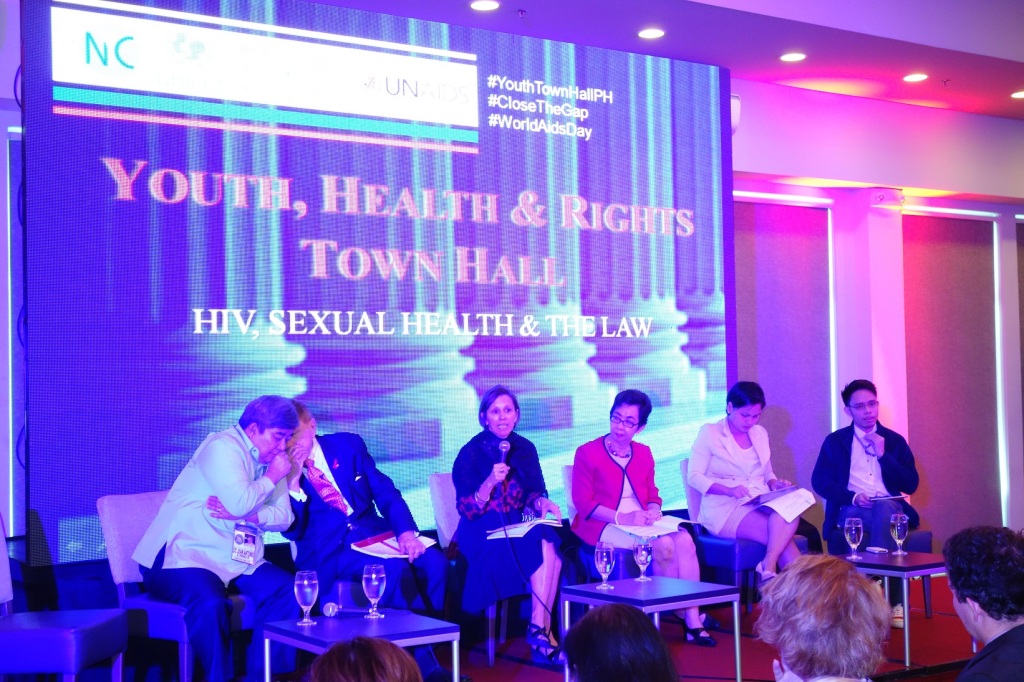 “In many parts of the country, adolescents—those aged 10 to 19 years—remain invisible in the HIV response: missing from programmes, and absent in the planning process,” said Lotta Sylwander, UNICEF Philippines Representative, in a joint press release. “We must, therefore, ensure that they are afforded opportunities that enable them to make informed and healthy decisions about their lives.”

Given the increasing vulnerability of the youth and young people to HIV, UNFPA, the United Nations Population Fund, emphasized the critical role of comprehensive sexuality education. “Information that is accurate, age-appropriate and consistent with the evolving capacities of young people will encourage responsible behavior among young people and enable them to make informed decisions about their sexuality,” said UNFPA Country Representative Klaus Beck.

Youth, Sex and the Law

Evidence in support of the evolving capacities of the child may not have been considered in the process of crafting these laws, particularly for those which date back several decades. Further, the country’s social protection schemes do not adequately provide support for unmarried pregnant adolescents.

It is important to note these legal information:

• Sex with an adolescent below 12 years constitutes statutory rape. Hence, it can be inferred that the age of consent for sex is 12+ years.

• Age of marriage is 18 years, but a person aged between 18-21 years needs written parental or guardian consent to get married

• Age of criminal liability is 15 years

The adoption of the Reproductive Health Law has been widely acknowledged as significantly advancing the sexual and reproductive rights for women in the Philippines, adolescent rights advocates note the concerning and restrictive articles within the Law which significantly diminishes adolescent rights to access commodities (including contraceptives, condoms) and services without the consent of a parent or guardian.

The RH Law does provide provisions for comprehensive sexuality education, however, without access to commodities and services, there is minimal impact for the prevention of pregnancy, prevention of HIV and other STIs and the delivery of safe motherhood programmes for adolescents.

Sex trafficking and the conflation with sex work has a number of implications for HIV prevention. Among the challenges of serving young people who sell sex are the legal, political and moral complexities presented by the distinction between those aged 17 and younger, defined as children and considered victims of commercial sexual exploitation and those 18 and older, who might be choosing to sell sex as consenting adults.

The AIDS Bill currently being contested in the Senate provides an opportunity to provide services (testing and treatment) for those aged 15-18, however adolescent rights advocates note concern over current reference to ‘routine testing’ which can be interpreted as ‘mandatory testing’ for 15-18 year olds considered ‘at higher risk’ and thus discriminatory. Further, the current legal barriers prevent those aged under 18 years to access prevention, testing and treatment.