Social media plays a vital part in this age of information. Young people get updated with news through their friends’ Facebook and Twitter feeds. Filipinos have also found a way to use this medium to mobilize search and rescue in times of catastrophe. 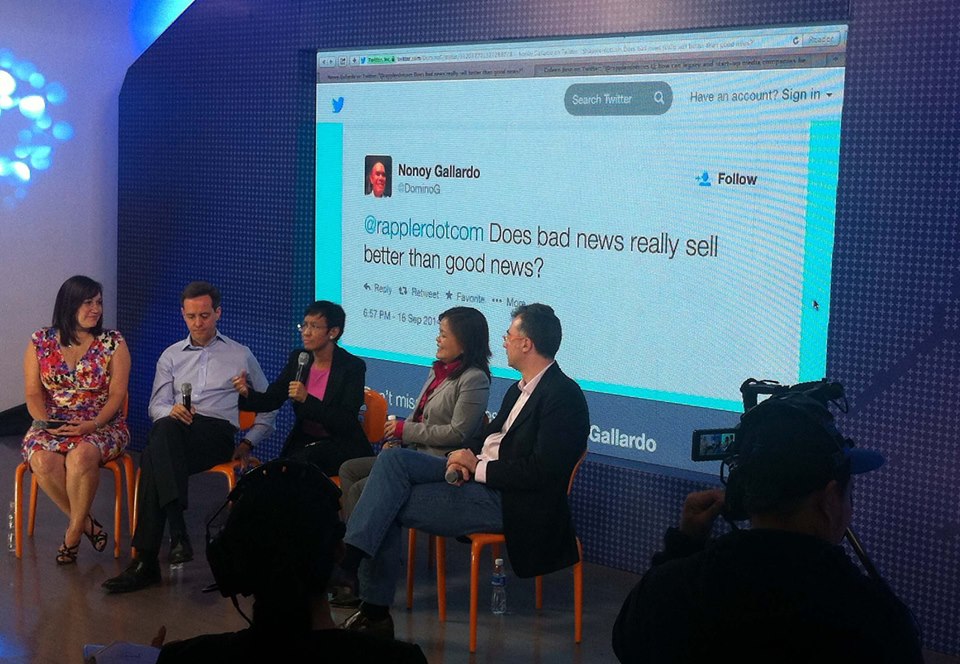 Speakers of the event talked about the importance of the public’s participation in collating, analyzing, and disseminating information through user generated content and social media platforms in a journalistic manner, in combination with top-down government workflows and bottom-up civic engagement. Topics also discussed by guests covered the political economies of national disasters, preparing for national disaster reporting, post-disaster corruption reporting, and the fine line between journalism and activism.

A key point common among all the discussions was the importance of the public’s participation and responsible journalism in society.

In recent years, we have seen the rise of citizen journalism in the country, as seen on social media platforms such as Twitter and Facebook. In these venues, users can upload texts, photos or videos to call out injustice and wrongdoings, or to laud heroic or random acts of kindness from people. Many of these posts eventually reach viral status, which helps them appear in mainstream headlines, or earn a spot in primetime newscasts.

Seeing the potential of citizen journalism as a news source, GMA 7 and ABS-CBN created YouScoop and Bayan Mo Ipatrol Mo, respectively, and integrated them into their regular newscasts and social media accounts.

All these developments are made possible by today’s technology, most especially the Internet and mobile devices.

As perhaps one of the most important breakthroughs in technology, the advent of the Internet democratized access to information that was previously available only to those who could afford education or books. It created an environment where everyone could share and consume knowledge via an “information highway” that empowers the people.

Mobile devices, in turn, combine portability and productivity in a gadget you can carry around with ease. Smartphones or tablets with high-resolution displays and cameras enable us to perform several tasks using just one device. Whether you’re shooting photographs, typing, recording sound or a video, downloading or sharing data, or browsing the Internet, everything is virtually in the palm of your hand and just one tap away.

Through these innovations in both the media and in today’s technology, regular citizens are given the capacity to take part in the process of news gathering and production, giving rise to what we now call “citizen journalists.”

Anthony R. Curtis, PhD of the University of North Carolina at Pembroke defines citizen journalism as “the gathering, writing, editing, production, and distribution of news and information by people not trained as professional journalists.” Citizen journalists, then, are concerned individuals who take part in the process of news gathering and production. The term does not discriminate by gender or age. One only needs to be capable of gathering, analyzing, verifying, and interpreting data in a journalistic manner.

The youth, being the primary users of today’s technology, also possesses the potential to be citizen journalists. But how can the youth contribute positively as a citizen journalist? What characteristics should they possess?

The youth need not earn a journalism degree in college to be an effective citizen journalist, but anyone who wants to become one must have specific traits and learn the way professional journalists operate. For that, you must be:

– A critical thinker. You do not just believe what you read, hear, or see. You always seek the truth. You always do your research before you say or claim something to be true.

– Curious. You must have the thirst for knowledge, to learn something new. You are always on the lookout for bits of information.

– Inquisitive. You ask the right questions. Journalists always think of the 5Ws and H when they are out to work: who, what, when, where, why and how. You gather information by asking these questions.

– Responsible. You do not disseminate misleading information. You always check your facts before you publish.

Be reminded, though, that although citizen journalists are not formally trained as professional journalists, they are not exempted from adhering to the journalist’s code of ethics. Journalism is a serious commitment because it is a public service. Journalism is about gathering and disseminating accurate, credible, and factual information. Journalists don’t check for factual accuracy and credibility just because it is part of their work but because even a small discrepancy in the information may mean life or death in a given situation.
Information is power. As a familiar saying goes, “With great power comes great responsibility.” For that reason, good and responsible journalists, citizen journalists included, must always uphold the public trust.

Anyone can become a citizen journalist, no matter their age or the college degree he or she has finished. Today’s youth are empowered more than ever with the availability of many tools that can help them pursue endeavors such as citizen journalism. The question, then, is whether they’ll take it further and be part of a greater picture.

Are you up for the challenge?

The Philippines is a country where disasters are always present, whether it’s a typhoon, earthquake, volcanic eruption or many other forms of calamities. The question is, is the new generation of young journalists ready to face it?

I learned three things to keep in mind when covering a disaster.

The first is, never go somewhere if you don’t know how to get out. Especially if a great deal of danger is present. We must always remember that no story is worth our life. This applies when covering war, terrorism, and similarly dangerous situations.

Lastly, we must observe and recount the reality, not to interfere or shape it. We should tell stories the best way possible but not to the extent that we omit or add information just for the sake of enhancing the stories. Remember that if we are covering disasters the people whose stories we are telling went through a great deal of struggle, so we must give justice in telling their stories.

Related:  [Listahan] Seize the moment: A guide for incoming freshmen

What Makes a Good Storyteller
By Johan Joshua Principio 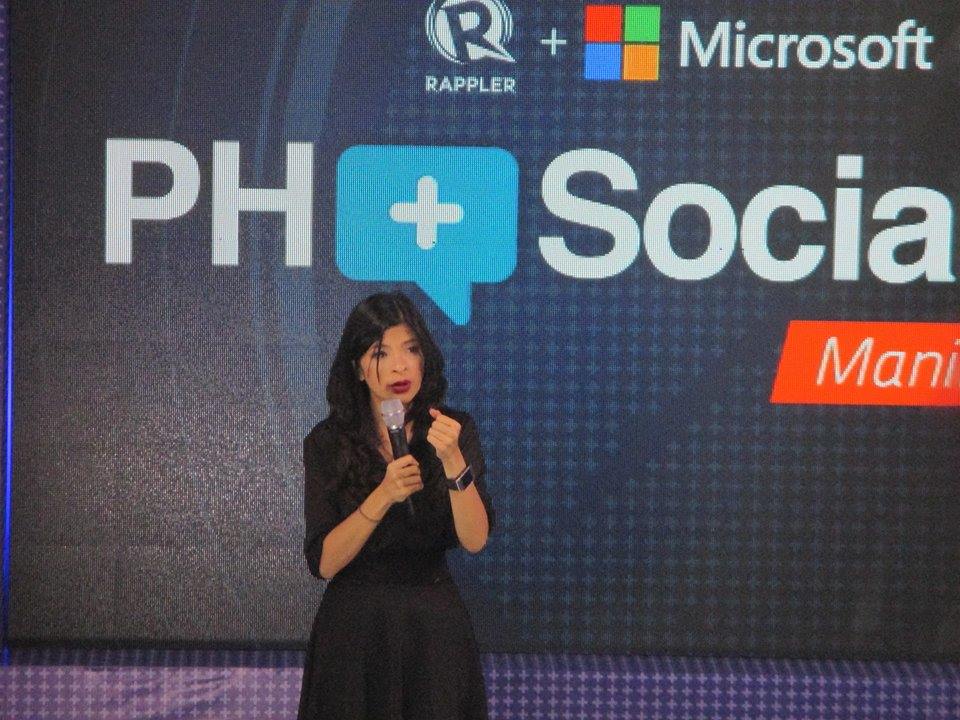 Journalist Patricia Evangelista made it clear to her audience what it’s like to be a storyteller, and how to be a good one.

Evangelista, despite her career as a successful multimedia journalist, simply addressed herself as a “storyteller.” She flew back and forth Manila and Tacloban to cover the aftermath of the super typhoon Haiyan, and recounted her stories of hope, survival, and recovery.

As a person whose job is very demanding yet not lucrative, she shares that it’s her interest that makes her keep her job, and if she were looking for money she would have just chosen a different career path. She admits that she does not even have much time for eating, and that she consumes cup noodles in her daily life.

For young and aspiring journalists like me, Evangelista’s storytelling techniques should be remembered in order to have an effective delivery to the public. These techniques include “being human” and telling stories that move readers or viewers.

I learned that young journalists like me may struggle, but we should never forget to put ourselves in everything that we do.

Choosing a story that you feel strongly about makes it easier to work, and does not necessarily mean that the flexibility and professionalism as a journalist is being weakened. It is more like knowing yourself better and finding your comfort zone as well.

I strongly believe that by telling stories we can make a difference, because the successful delivery of stories gives us the power to touch and move people. By being able to do so, we become better at persuading others, which for me is one of the most difficult goals to attain in storytelling.

PH+Social Good Summit 2014 was presented by Rappler, MovePH, +SocialGood, and Houston-based Global Center for Journalism and Democracy, and was held at the Mind Museum in Taguig last September 17.

Youth Reporter at MP-KNN
Luis is a journalism graduate from the UP College of Mass Communication, and a member of UP Aperture, the only photojournalism student organization in UP Diliman. He spends his time reading books, watching films, and surfing the internet. When not at home, he is out and about birdwatching or practicing his photography.

One Comment on ““PH+Social Good Summit 2014: Perspectives and Lessons””