The threat of volcanic eruption, recent earthquakes, and localize thunderstorms have been on top of the news these recent weeks. The term “new normal” is widely used now to describe these natural phenomenon that are becoming normal, something that we should expect to happen again in the coming weeks, months, and years. It is high time then that we discuss the role of new media, at times when a lot of people have access to information and can share information in real time. Nowadays, this responsibility is not limited to those who work in the media but is shared with millions of people who have access to this medium: the Internet.

On September 17, 2014, Rappler, together with the Texas-based Global Center for Journalism and Democracy and PH+SocialGood held a journalism forum that tackles media’s preparedness in covering disasters, and its role as watchdogs of the government and other sectors in planning, implementation and post-disaster recovery. The workshop highlighted not only the role of people who work in media, but everyone’s role in becoming a credible source of information.

Even if we all know that having disasters or natural phenomenon is normal, Enia pointed out that politics and economics play a vital part in how society deals with them. If we were to look at our local government, it would be essential that we look at how our officials weigh in when it comes to disaster preparedness and recovery.

Enia also said that local government units should implement short-term and long-term plans, especially in dealing with what he called “low probability, high impact (LPHI) events. A good example of LPHI would be the looming eruption of Mt. Mayon.

As of this writing, the Philippine Institute of Volcanology and Seismology maintains alert level 3 in the vicinity of the volcano. A volcanic eruption is a low probability high impact event, meaning it can happen once every ten, five or three years, yet it can deliver a significant impact on the area, such as in the economy, tourism, and safety of the residents.

As for how media institutions can plan in covering disasters, Rick Dunham of Tsinghua University and the International Center for Journalists cited best-case to worst-case scenario plans and the importance of crowd sourcing. Dunham acknowledged too that social media has changed the way we communicate.

Information can be generated now from different social media sites, such as Facebook and Twitter. A journalist has the responsibility to filter which among the information gathered from the World Wide Web is true and factual.

“[Media] should be a trusted, authoritative source that can inform the public of facts rather than social media rumors,” Dunham reiterated. 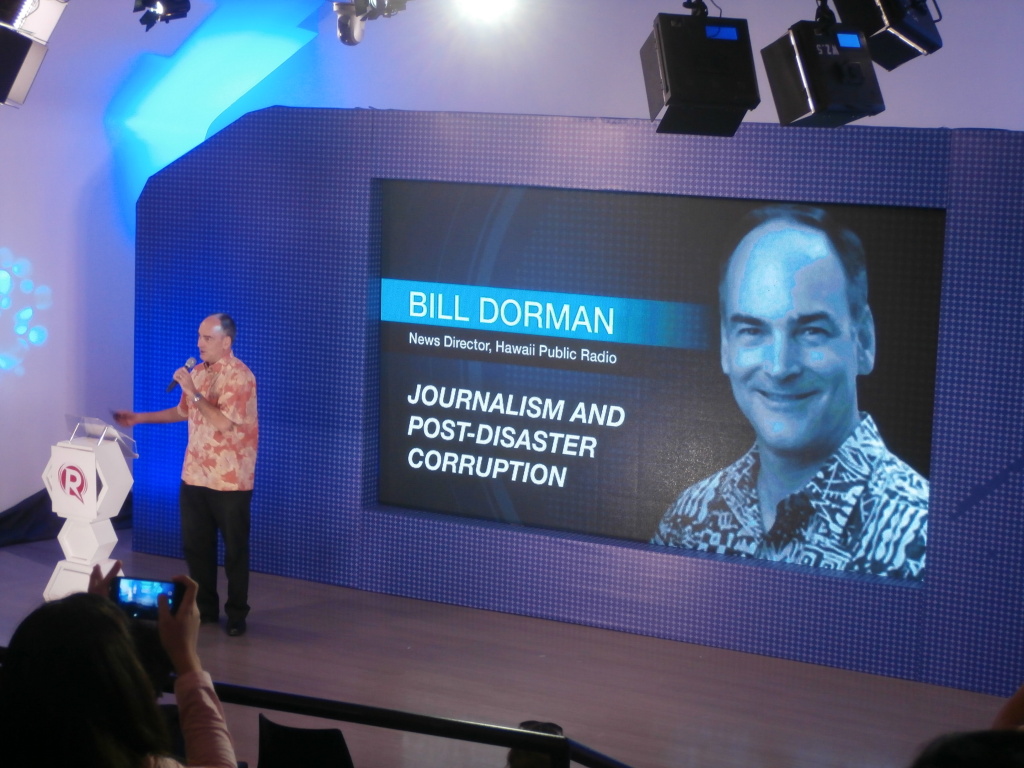 Bill Dorman of Hawaii Public Radio at the PH+SocialGood Summit 2014 held on September 17 at the Mind Museum, Taguig City | Photo by Jenny Ortiz

A sad reality we all know is that whenever we talk about post-disaster efforts, issues of corruption arise. This is because post-disaster efforts often involve a huge amount of local and international aid. Thus, as watchdogs, journalists should be at the front line in ensuring that aid or funds are well spent.

Journalists, according to Dorman, should push for greater transparency and accountability. Based on our experience during post-Haiyan efforts, issues of corruption and mishandling of funds reported by the media pushed the government to create the Foreign Aid Transparency Hub, or FAiTH. Through this website, everyone could see how foreign aid was being used.

Dorman also gave emphasis on the following: put faces on the numbers and tell the stories behind the statistics; find situations that are working to highlight those that are not; public information and common sense; and the priority is fixing the problem: fixing the blame can come later.

“It’s the small stories that tell the bigger story,” he concluded. 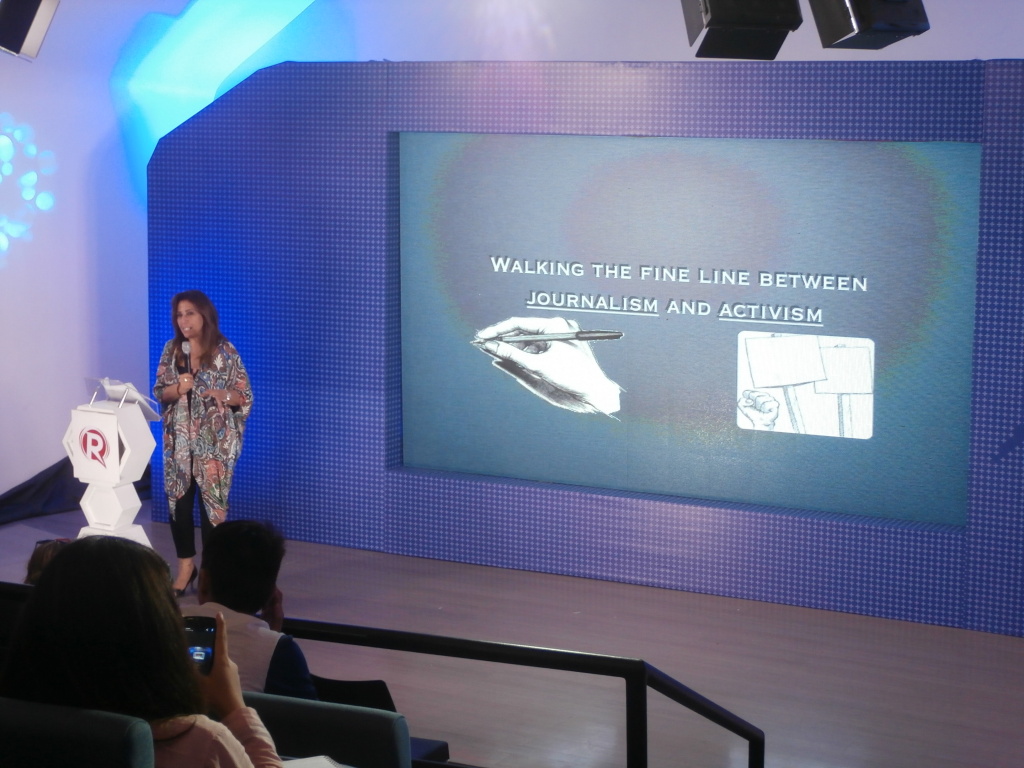 Shahira Amin at the PH+SocialGood Summit 2014 held on September 17 at the Mind Museum, Taguig City | Photo by Jenny Ortiz

Journalism and activism are two different things. But when you are a journalist and you see that something is wrong, will you cross the line and be an activist? Well, it will take a lot of guts and a deep reason to do it. But can we be a journalist and activist at the same time? Shahira Amin, former head and anchor of the state-owned Nile TV in Egypt, has walked the line between the two.

Related:  [Opinion] The Effects of Cohabitation on the Youth

“Advocacy journalism is where activism and journalism meet,” Amin said.

Before we are a journalist, we are humans first. In every issue, it is normal to be affected and take sides, but a responsible journalist should present all sides of the story.

In Amin’s case and in the situation in Egypt before, she took a side mainly because she believed in fair reporting, and the regime would not allow it.

“I am on the side of the people, not of the regime,” she said.

The role of our policymakers: post-disaster efforts

Politics and policymakers play a vital role in rehabilitation and restoring communities after a disaster. In their hands lie which direction a certain community will take.

According to Kris Van Orsdel of the Governor’s Office of Storm Recovery in New York City, short-term needs and long-term desires and realities must be addressed. It is important also to know your funds and plans.

Van Orsdel reiterated that rehabilitation and recovery are a community engagement process. “If they said they’re going to do it, hold them to it, and make them do it,” Van Orsdel concluded.

Tell the stories on the ground

“I think it is our job to tell stories in a way that we make people imagine,” said Patricia Evangelista, multimedia manager of Rappler.

Evangelista shared her experiences while covering post-Haiyan efforts in Tacloban. While it is important to report on statistics, numbers, national and international efforts, Evangelista highlighted the importance of creating human stories: after all, a journalist is a storyteller as well. She explained that the public may not be able to relate to numbers, terminologies and data, but they will be able to relate to stories of hope, despair, pain and moving forward.

In the era of new media and the new normal, everyone can share information and data. It is both a privilege and a responsibility. Reporting on disasters and other events is a process in which everyone can participate.

Youth Reporter at MP-KNN
Jenny is a broadcast communication graduate from the Polytechnic University of the Philippines. Aside from her daytime job as coordinator of 9News, she juggles volunteer works for MP-KNN and the YMCA.

2 Comments on “New Media and the New Normal”