A few minutes after midnight of July 27, 2014, our country’s population reached 100 million with the birth of a baby girl named Chonalyn at Fabella Hospital. That event was celebrated and welcomed by health officials, our government, and other sectors in our society. That event proved that the Philippine population has been steadily growing for many years, and reaching the 100 million mark is symbolic and a milestone. 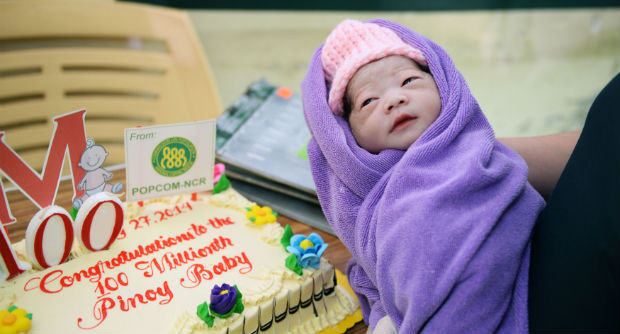 A nurse holds the symbolic “100 millionth Filipino baby”, the baby making the Philippines’ population hit 100 million, during a ceremony shortly after its birth early on July 27, 2014 at a government maternity hospital in Manila. (Photo by AFP via Inquirer.net)

Our country is now the 12th largest country, ranking 35th of 238 countries or principalities in population density. Some see this as something beneficial in terms of economics: the labor force is a big factor, and is seen as something that can be of great advantage to us. For some, it poses a great challenge for how we can ensure that each one of our 100 million people eats healthy food, has access to education, has a safe home to live, has work opportunities, and so on. There are also those who do not care at all. After all, each one of us is fighting for survival.

Dr. Juan Antonio Perez III, Executive Director of the Commission on Population, gave us his thoughts about this population milestone in our country.

MP-KNN: Last July 27, the Philippines welcomed its 100 millionth Filipino; can you share with us how your commission monitored this birth?

Dr. Perez: The Commission on Population used the mid-year projection as of July 1, 2014 of the Philippine population. That projection was 99,880,000; since we know that there are 4,400 births every day in the country, we projected the number of births to a timeline starting July 1 and came up with the determination of July 27, 12:05.54am as the most probable time of occurrence of the 100 millionth birth.

We decided that it would be important for each major local government unit to recognize this fact by determining the newborn closest to this time in 100 LGUs, thus we are recognizing 100 babies in 100 LGUs as the symbol of the need for population development and inclusive growth in each province and major city.

MP-KNN: What does this symbolic event mean to us?

Dr. Perez: The 100 million number is significant as it now makes the country one of 12 nations that has a hundred million or more population. We are the next country after Mexico to reach this mark. This benchmark is significant because it signifies the need for development to reach every Filipino and not just those in major cities. Inclusive growth means every local government unit taking care of the needs of all its constituents, and these 100 babies are indicators of the reach of inclusive growth in 100 provinces and cities throughout the country.

Related:  Sa-gay-la: Acceptance of gay sagala in our culture

MP-KNN: Do you see this population growth as something that brings more advantages than disadvantages to us, or vice versa?

Dr. Perez: Population growth is a fact of life and will continue for the next half century. That is a fact and not an advantage or a disadvantage; it is really a challenge for the national and local governments to ensure that every Filipino gets the benefit of the progress we all hear about right now.

An increasing number of dependents (both 0 to 15 years old and above 65) can give our social services quite a strain in the immediate future, which is why we are monitoring the progress of the 100 babies. For the next 15 years we need to make sure they get the proper and adequate health, education and social services so they can be part of a productive work force in the next two decades. It is at that point where we would be at an economic advantage with a large and young Filipino workforce.

Dr. Perez: Government always uses population as a factor in its plans for development, based on actual populations when we have a census and based on projections which we have done this year. It is the adequacy of government plans which need constant review and improvement as our dependent population grows and the working population also grows. This double burden of growing sectors of the population forces planners to choose between employment generation and social services in its plans and budgets. It would always be easy if we had the resources for both, but that is never the case. That is the issue for our leaders and planners in the next decade.

MP-KNN: Part of the movement in our population rate is the movement of the rate of workforce vs. dependents. How are we faring in this factor?

Dr. Perez: As I mentioned above, we are in a delicate period of balancing our resources for the two segments of the population that we need to monitor. Countries have been known to manage this period well and got into the economic development take-off stage, such as Japan, Thailand. Others in Eastern Europe did not take advantage of this period and have fallen back in development.

MP-KNN: We have a young population. What do you believe should be done to ensure that we are producing a population that can aid in our development as a nation?

Dr. Perez: Health service for all is a necessary ingredient, and thus Kalusugan Pangkalahatan needs to open up to cover all populations, particularly those living in 4000 geographically isolated and disadvantaged areas. Education for all must also be a reality and this is especially true for girls who must be encouraged to complete the K to 12 program. Women must be able to meet their desired family sizes and if that means access to family planning services, that must be done. Twenty percent of our women, around 3 million, need to have these services available in the next five years, and the Responsible Parenthood Reproductive Health Law will be important in this aspect.

MP-KNN: As for the youth, what do you think is the youth’s role in ensuring a healthy population?

Dr. Perez: The youth are becoming an important player in this area as the fertility rate of girls 15 to 19 has been going up in the past decade. If girls start having children early, the fertility rate of Filipinos will remain high as an 18 year old can have three or more children in her lifetime. Comprehensive sexuality education in schools for young people should be in place now as mandated by the RPRH law.

Youth Reporter at MP-KNN
Jenny is a broadcast communication graduate from the Polytechnic University of the Philippines. Aside from her daytime job as coordinator of 9News, she juggles volunteer works for MP-KNN and the YMCA.