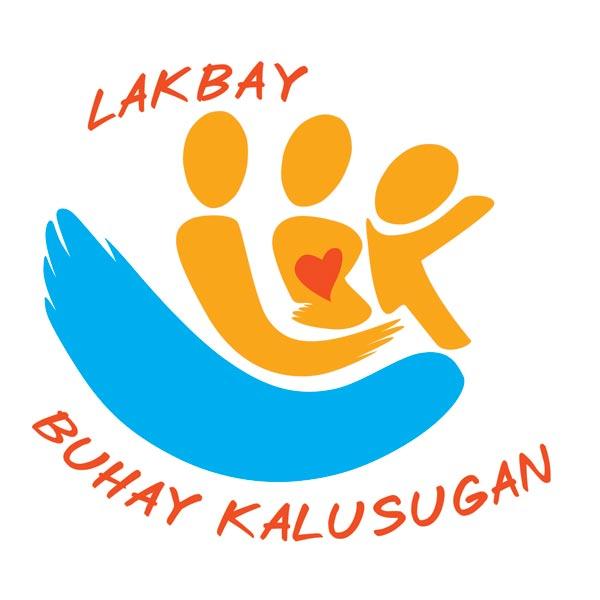 Melanie Valencia, A 24-year old mother of the Ati Tribe was one of the members of the indigenous community to benefit from Lakbay Buhay Kalugusan (LBK), the Department of Health’s (DOH) health caravan in Dumarao, Capiz.

Heavy with child at 8 months and with her eldest child in tow, she said could not pass up the opportunity to avail of the free health services. While waiting for the medical consultations, she and a hundred other Aetas participated in the health promotion activities, visited the exhibits and participated in health-oriented games. 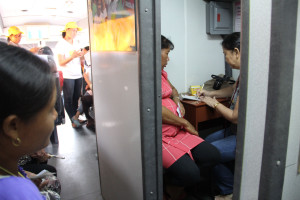 Jean Advincula, 24 years old and 7-months pregnant with her third child, also braved the heat and lined up as early as 7 in the morning to avail of the prenatal check up at the LBK Bus, a customized bus replete with clinic and examination areas.

“Importante mag pa prenatal check up para siguradong healthy yung magiging baby ko,” (It’s important to get prenatal checkups so that I can ensure that by baby will be healthy) she said, adding that she normally would have to pay for a check up at the hospital or barangay health center.

Melanie and Jean were among the hundreds of residents of Dumarao, Capiz who took time off from work to avail of the services that the health caravan brought in early September.

Despite the overbearing heat and humidity, crowds gathered at the fiesta-themed health event at the Dumarao Sports Complex to avail of medical consultations, health services and medicines. Program beneficiaries included those belonging to the marginalized sectors, DSWD’s Pantawid Pamilya (4Ps) members, indigenous peoples, senior citizens and pregnant mothers from 33 barangays.

The event initially targeted 1,300 individuals, but total crowd estimates at the height of the event easily exceeded 2,500. 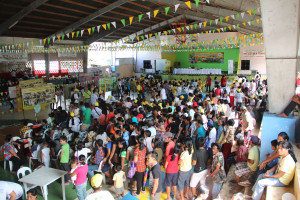 A separate area manned by volunteers was set up for children to play in while their mothers were getting check-ups and attending health classes. Teenagers and students also visited the interactive exhibits and attended health classes in the afternoon. A civic parade around town, variety show, and games for participants and volunteers were also held, adding to the festive atmosphere.

According to Provincial Health Officer Dr. Samuel Delfin, most of the poorest members of the community, particularly the Indigenous Peoples (IPs), don’t really get a chance to get regular check-ups. However, he was pleased to note that many of them were made more aware of healthy practices, particularly facility-based deliveries because of the event.

“Dapat ma’am sa center kami manganak. Di ba ma’am sabi sa itinuro sa amin bawal na ang manganak sa bahay kasi delikado?,” (We should give birth in the health center of facility. I learned that we shouldn’t just give birth at home because it can be dangerous) said one Ati woman during the post-assessment interview. 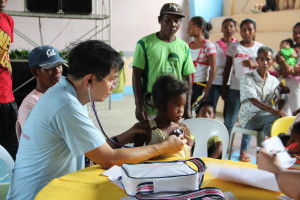 According to DOH Assistant Secretary Pauline Jean Ubial, the LBK Kalusugan Pangkalahatan on Wheels campaign focuses on the preventive, promotive and health education services rather than curative. Ubial explained that the program is a comprehensive health promotion caravan that aims to bring information and education to families in remote communities. During the press conference and opening program, she clarified that LBK is not just about giving free medicines.

“The health caravan is just a start.  We want the journey to better health to be an everyday occurrence beyond LBK,” said Ubial.

The Municipality of Dumarao in the Province of the Capiz was the 27th stop of the LBK-KP Health Caravan, and the third province in the islands of Visayas to be visited. The health fiesta saw a high level of political support from the province and municipal officials, starting from the governor, the provincial board members down to the mayor, vice mayor and municipal council members. Both Governor Hon. Victor Tanco Sr. and Mayor Hon. Leslie Warren Benjamin expressed full support to the health programs at the provincial and municipal level.

Asec. Ubial also praised the province for the high degree of success in meeting goals for the health sector reform agenda, saying it was among the first 16 provinces to achieve the targets.

“Capiz is one of our premiere provinces in the implementation particularly of our Kalusugan Pangkalahatan. We see the capacity and commitment of the local government officials to actually implement the health programs,” said Ubial.