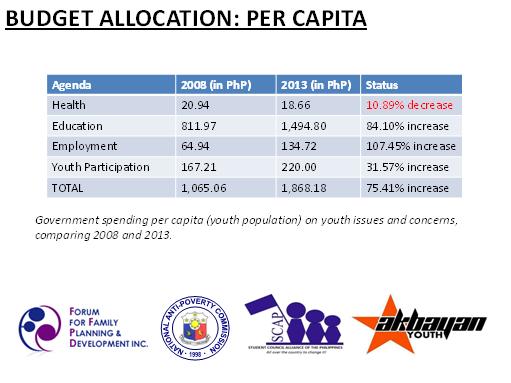 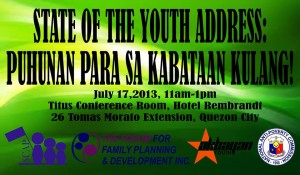 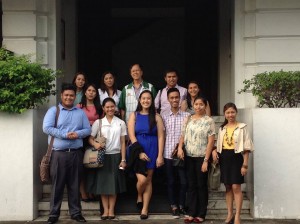 Government investment on young people is not felt.

This was the statement made by Akbayan! Youth (AY) and the Student Council Allianc

e of the Philippines (SCAP) in their meeting with Deputy Presidential Spokesperson Abigail Valte a week before the State of the Nation Address (SONA).

The meeting was held at the Malacanan today and was attended by student council leaders of NCR. The meeting with Valte is the highlight of the pre-SONA activities that the youth groups are holding in anticipation of the President’s SONA next week.

Ninian Sumadia, Akbayan Youth National Council member, pointed out to Valte that the current spending of the government on young people’s concerns is currently at 2,000 pesos per person. She cited the study conducted by the National Anti-Poverty Commission (NAPC).

“The report of NAPC captures the grim picture of youth situation in the country”, Sumadia said. “The government spending for youth concerns is still way below than the spending of our neighboring countries and international standards”.

The NAPC report underlined that the education spending is at 2.7% of the GDP, way below the United Nations’ international benchmark of 6%.

The study named “How much does the government really spend for the youth?” listed government programs that directly addressed youth concerns such as education, teenage pregnancy, unemployment, HIV-AIDS and sexually transmitted infections among others. The study defined youth as persons within the age of 15-30 years.

The study compared public spending on said programs as reflected in the General Appropriations Act of 2008 and 2013.

An increase of 800 pesos in government spending for each young person in 2013 from its 2008 allocation was reported. Although a 75% increase, the groups brought into attention the rising incidence of HIV-AIDS and STIs, unemployment and college drop-outs among young people. 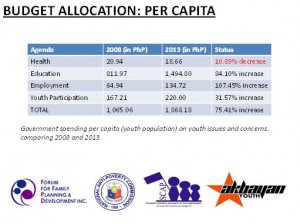 Sumadia also mentioned that the increase in allocation may not be enough in capturing the growing population of young people. She also said that the programs may not be effective or even non-existent.

“Even in the midst of rising cases of teenage pregnancy, the government does not spend a centavo to address the issue”, she said. “Spending for education, employment and youth participation increased. But spending for young people’s health decreased by 10.89%”, she lamented.

The Forum for Family Planning and Development, an NGO that works with youth developmental and health issues, also raised an alarm on the government’s non-allocation of funds to address teenage pregnancy.

The NGO provided the data that the Philippines ranks No. 3 in Southeast Asia in the incidence of teenage pregnancy. 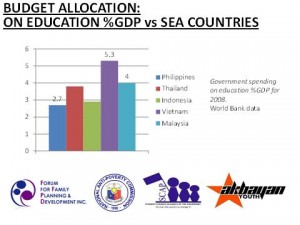 The youth groups also recommended that the government explores the re-allocation of the controversial Priority Development Assistance Fund (PADF) or more commonly referred to as “pork barrel” to social services.

The PDAF is given to legislators for project implementation and has been the center of controversy following the report of alleged misuse amounting to 10 billion pesos.

Related:  Laoag students learn to be sassy and safe

Heart Dino, Chairperson of SCAP, maintained that the pork barrel scandal is an impetus to rethink government priorites.

“We should invest more to the future of young people, if we want to maintain the momentum that this government has”, Dino said.

“The economic growth does not mean anything if it’s not translated to public spending for social services”, she concluded. ### 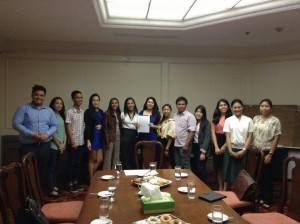