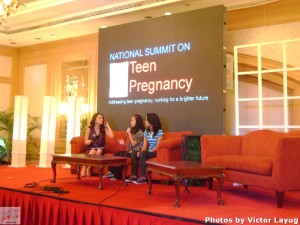 This is the first in a series of Mulat Pinoy’s coverage of selected topics from the 1st National Summit on Teen Pregnancy, conducted on September 14, 2012 at the Heritage Hotel, Manila.

One of the initial activities at the National Summit on Teen Pregnancy was a panel discussion entitled “Teen Pregnancy in the Philippines: Facts, Trends and Issues.” Tuesday Vargas, celebrated TV personality, actress and currently a judge on TV5’s Talentadong Pinoy, served as the moderator of the discussion.

The first part of the panel discussion was entitled “Teen Mothers: Their Stories and Reflections.” Tuesday began by saying that she had a keen understanding of the issue, despite not being a teenager herself when she became a mother. She did learn how hard it was, though, and how big it was of a challenge when she gave birth to her child when she was 21.

Tuesday went on to state that whenever the topic of teen pregnancy would come up, people would tend to whisper or converse in hushed tones if ever they did know someone who had a child while still a teenager or had a child out of wedlock. People either refuse, or are shy, to talk about the subject out in the open. What they fail to realize, though, is while they whisper about the numerous stories of teenage parents, the issue not only grows, but also rapidly escalates.

The first two speakers for the panel discussion were the sisters Dorilyn Sacaguing, aged 24, and Angeline Quiming, aged 19, from Antipolo, Rizal. Both Dorilyn and Angeline were teenage mothers. Dorilyn began by retelling how she, at age 17, became pregnant. She stated that the baby was unplanned, and she and her partner were not fully aware of their actions, being the young individuals that they were at the time.

Upon learning that she was indeed pregnant, Dorilyn was afraid of how she would tell her parents. When she and her boyfriend did tell her parents, they did not get mad, but they did insist that the two live together since they were expected to raise the baby together. Dorilyn’s parents also didn’t pressure the two to get married, and were vary supportive of the couple’s decision to keep the baby and to raise it together.

Dorilyn explained that her pregnancy was very difficult. Without much money, she wasn’t always able to afford the necessary check-ups one should go through when with child. Despite there being centers in rural areas for pregnant women, those centers still expected donations. Those donations were supposed to be given freely, but instead, those seeking medical help at centers were more or less obliged to give donations.

Dorilyn also stated how she wasn’t always able to take vitamins. If she had money with which to buy vitamins, she’d buy and take them, but that wasn’t always the case. Even though doctors would give prescriptions for medicines and vitamins that would go a long way towards ensuring that a baby is healthy, the mother would still have to go and purchase these medicines herself. Even the supplies for Dorilyn’s baby, such as diapers and toys, had to be scavenged from the goodness of the hearts of her friends; it was indeed a challenge unlike any other.

Once the baby was born, Dorilyn and her husband were extremely happy. As time went by and Lesriel (the baby) grew up, they then realized what a trial being a parent was. Dorilyn felt that she might not be able to properly raise the child, seeing as how both she and her husband were unemployed at the time and were financially reliant on her parents, forced to make do with what little her parents could give her.

Dorilyn ended her story by saying that it had been very difficult because her child was rapidly growing, and it was her baby’s grandparents who were supporting her child. She also emphasized how difficult it was for her to find a job since she hadn’t finished her schooling.

Related:  Lessons from the Job

Angeline, Dorilyn’s sister, spoke next in the panel discussion. She had her first child when she was just 13. She was not fully aware that she could become pregnant at such a young age, and she did not mean for it to happen. Angeline stated that after giving birth, she tried both studying and working again, to pick up where she left off. She ultimately had to stop again, though, since she wanted to be there for her child.

2 Comments on “Teen Pregnancy in the Philippines: Facts, Trends and Issues, Part 1”