Dare to Ask: Teen Pregnancy, HIV-AIDS & the Youth, a symposium on health, sexuality, population and development was held at August 29, 2012 at the Bulwagang Balagtas of the Polytechnic University of the Philippines. It was hosted by John Carlo De Galicia, the Youth Adviser for the Foundation for Adolescent Development (FAD).

FAD is a non-government organization which aims to help Filipino youth, aged 13-19, understand, appreciate and manage the changes that accompany the critical period known as adolescence. 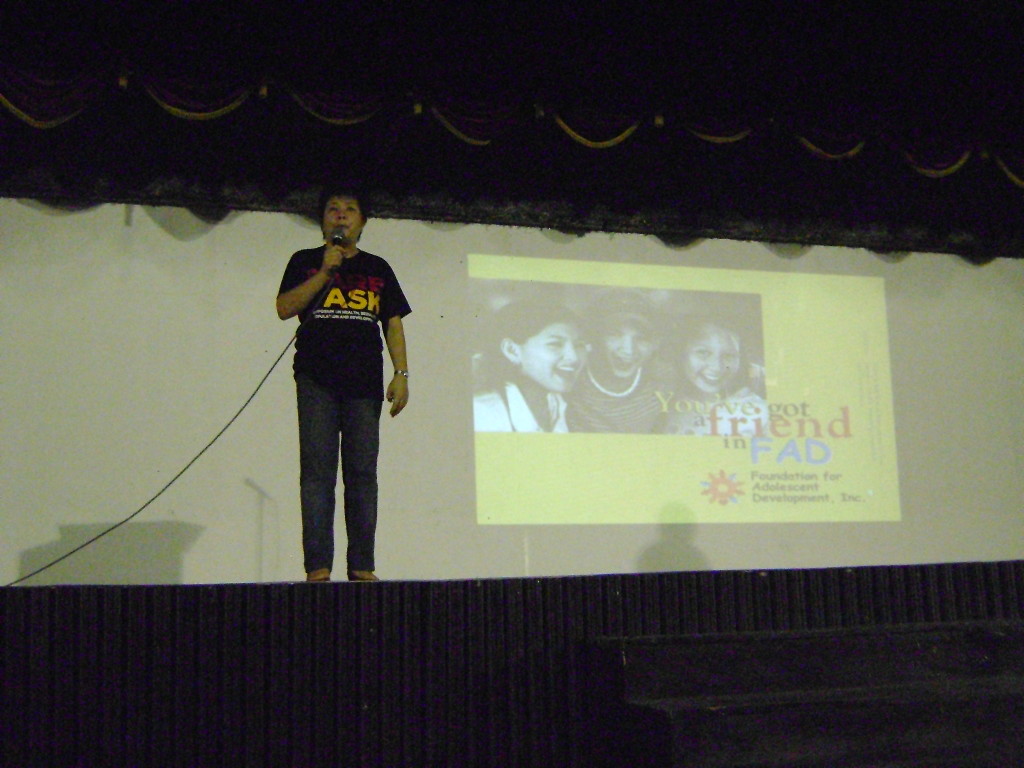 Ms. Cecilia C. Villa, Executive Director for FAD, explained to the audience of students from PUP that FAD believes in teaching how prevention is better than any cure, and it aims to do so by providing anchored information and education. She went on to explain the four themes espoused by FAD: Self-Esteem, Boy-Girl Relationships, Parent-Child Relationships, and Sexuality.

To recap the previous activities held by FAD to promote awareness, she explained how they conducted a series of youth camp-based programs in adolescent sexuality and reproductive health in the late 1990s.

Today, FAD is has been conducting the Dare to Ask symposiums, which aim to empower Filipino families, help them make informed decisions, and help them improve their quality of life.

The first resource person to speak was Dr. Emma Alesna Llanto, President of the Society of Adolescent Medicine of the Philippines and pioneer of the Teen Mom Program of the Philippine General Hospital. Dr. Llanto informed the audience that most of today’s youth are not accurately knowledgeable about HIV, primarily because most of today’s youth receive their information from media. Mass media is not, she asserts, the most accurate source of information pertaining to sexuality.

After Dr. Llanto’s talk, a PUP student then asked a question pertaining to the education of out-of-school youths, stating that these youths who are not currently enrolled in any academic institution have a higher likelihood of becoming teenage parents themselves mainly because of their lack of education. His question was answered by Ms. Villa, who said that a possible solution would be a partnership with the Sangguniang Kabataan in areas wherein more sexual education is required, as well as another partnership with the National Youth Commission. The NYC may be able to discuss sexuality issues with the out-of-school youths. 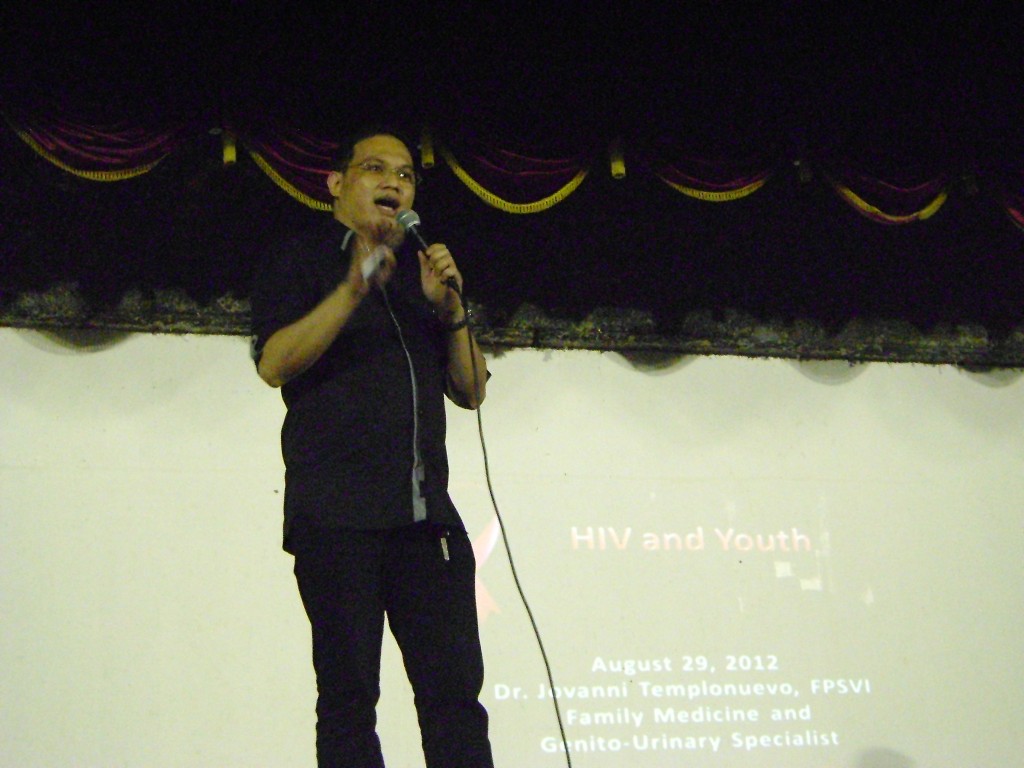 The second resource speaker was Dr. Jovanni Templonuevo, an HIV and AIDS specialist who hoped to help the students understand three things that day: identify their role in HIV prevention, understand key facts about HIV, and identify their next steps regarding HIV prevention. Dr. Templonuevo showed the audience the statistics published by UNAIDS, WHO and UNICEF, stating that by the end of 2010, there were an estimated 24 million people living with HIV/AIDS. Approximately 50% of these were women, and 3.4 million were children.

He then stated that from the years 1990 to 1999, not only was there a steady rise of new AIDS cases, but the Philippines was also one of the seven countries in the world wherein there was an increasing number of HIV primarily because of IDU (intravenous drug use).

According to Dr. Templonuevo, the four most common modes of transmission of HIV/AIDS are unprotected sexual contact (whether heterosexual, homosexual and bisexual) infected blood transfusions, infected pregnancies, and the previously stated IDUs, usually because of shared or previously used needles. Dr. Templonuevo dismissed several speculated but false modes of transmission such as mosquito bites, hugging, kissing, and sharing utensils, towels or bathrooms with someone who is HIV-positive.

A student asked Dr. Templonuevo regarding cures or control once infected, since he spoke mainly of prevention. Dr. Templonuevo responded that currently there is no cure for HIV-AIDS, but there is a treatment available to those who are HIV-positive. The treatment involves the use of anti-retroviral (ARV) drugs. ARVs control HIV replication, restore and preserve immunologic functions, stabilize and increase CD4 cell counts, and reduce HIV-related complications. Their use improves quality of life and increase chances of survival. ARVs are available to anyone who has tested positive, so long as he/she has been tested three months after exposure to HIV so as to avoid a false positive.

Dr. Templonuevo ended his talk by stating the ABC of HIV prevention: abstinence, being faithful to one partner, and correct and consistent use of condoms. He also underscored the importance of saying no to drugs, and getting good education.