Fascination is the state of feeling an intense interest in something. Or, in my case, with somebody.  Even as a young boy, I already had a fascination with Dr. Jose P. Rizal.

My parents never fail to tell my friends about a particular story from my childhood; I was three when it happened. One strange day, I went on a crying streak from morning until evening. Worried over their first born child, my folks brought me to our trusted doctor in Paco, Manila. After a thorough check-up, she found nothing wrong with me, so we just went back home. Nothing would help. Not even toys and ice cream could make me stop. I was crying my lungs out like a wailing siren, such that it prompted our caring neighbours to come over and check on me. 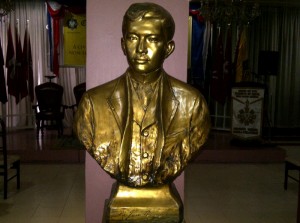 Nothing would make me stop crying. It was about 8 in the evening when my Lolo Tony dropped by our house. My grandparents lived near our place, at the time. Upon seeing me all red and puffy eyed, he told my father something that would forever mark my childhood: “Bring my grandchild to Luneta.”

Like obedient children, my parents took off with me. While inside the taxi, my parents were arguing about my dear Lolo’s idea. They wanted to bring me to the emergency room of PGH. But the Golden Taxicab driver, Mang Mundo, had instructions from my Lolo and was able to bring us to Luneta in a flash. Traffic was not that bad back then. He had the good mind to drop us off in front of the Rizal Monument.

At that exact moment, just like magic, I suddenly stopped crying.

My father said I took off and ran towards the statue of Dr. Rizal. I started running in circles around the monument. I looked up and started laughing, jumping and pointing at the bronze statue in front of me. My parents were dumbfounded. After spending two hours in front of the Rizal Monument, I was smiling like a child on Christmas Day.

Back home, Lolo and Lola were worried about their favourite apo. You see, telephones were not regular household fixtures back then. After later seeing that I was all right, they heaved a collective sigh of relief! When they asked about what transpired during the 2-hour vacuum in their lives, my parents told them of my happy encounter with my newfound friend: Dr. Rizal, the statue. Proudly and quite affectionately, my Lolo started to call me “Rizal” that night.

My cousins would also tease me, calling me, “Dr. Rizal.” It became a childhood “alias” of sorts. That name stuck with me until my Lolo Tony passed away when I was in Grade 3. I was “Rizal” for quite some time of my childhood.

All Children Need a Hero

As a child, I tried my best to know more about the person behind the statue, whom old people reverently called Dr. Jose P. Rizal, or “Pepe.”

My childhood was filled with images and stories of Dr. Jose Rizal. He was my hero even before I learned to read or write. There was something about him that gave me an early impression that anything is possible with hope, even in the direst and darkest moments. I could hear the voice of my Lolo as he narrated how Rizal courageously faced his executioners at Bagumbayan. In my mind I created a library of images about Rizal. I sorted and stored various drawings that I glimpsed in my grade school books, magazines, and my Lola’s favourite, Liwayway.

I vaguely had an idea of what heroes are, and what makes one a hero. From what my child’s mind could conceive, and from what I had seen on TV and heard on the radio, heroes could either be real or imagined: humans, angels, robots, or animals. Yet somehow, I knew even before then that Pepe was a hero to many people. He could be my hero too.

In cartoons and comic books ,heroes have superpowers. They fight villains and always emerge victorious after a hard battle. Every Friday, after a gruelling week of school, while my classmates would talk about Voltes V or the Superfriends, I would turn to books and read stories about Rizal. The following Monday, after a weekend of watching shows of superheroes fighting evil, my classmates would tell stories of how their own special heroes saved the day for mankind. Sometimes they even saved the whole universe. Their heroes always survived another day to do good deeds for mankind. Their heroes were beyond death.

After reading that Rizal was unjustly convicted and sentenced to death, I felt the fear that he must have felt at that moment. But Pepe was not like me. He was ready to face his fate. He knew his destiny was martyrdom.

I prayed that he survived and lived. And I prayed harder for his fate to change. But still he died a martyr like most real heroes before him did. I silently cried that time, still hoping that just like in fairy tales he would suddenly come alive.

Using all the imagination a young child could muster, I tried to alter his destiny. I imagined him fighting alongside Bonifacio and the other heroes of the Revolution. I imagined him back in Calamba with his dear mother and siblings, or maybe a family of his own with his wife, Josephine Bracken. I wanted Pepe to live a long life so that he could have seen his own people honor him with gratitude.

But that was not his destiny. That would not make him the hero that we all know and love so dearly. Realizing that it was never going to happen, the “little Pepe” in me cried even more.

I grew up with Pepe; I grew up with my hero. My whole childhood was full of images and stories about him: real stories about him, and those that I created in my young mind. I was very fortunate to know Dr. Rizal early in life. It gave me a deep sense of love of country (I didn’t know the word “patriotism yet), as a child who was proud to be a Filipino.

I have my own son now. We talk about Pepe just like how my Lolo did with me before. Together we look up Dr. Rizal on the Internet, read books, and watch movies about his life and his works. He adores Dr. Rizal, and he is very fascinated by this great Filipino. My son needs a great role model to emulate and learn from. I am glad that it is Pepe.

Dr. Jose Rizal has long been gone. Yet his ideals and works live amongst us today. As a child, I didn’t have the means to keep him “alive.” But I promised Pepe that someday I would continue his fight against the “cancers of society.”

On the occasion of your coming 151th Birth Anniversary, the day has come for me to fulfil my promise to you. Happy birthday, Pepe.