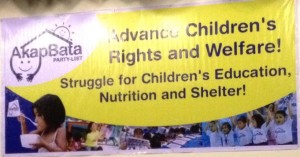 On May 9, 2012, during the second National Convention at the Bulwagang Balagtas in PUP Sta. Mesa, the AkapBata Party-List child welfare group launched E-Monitor 2012 (Enrollment and Education Monitor 2012). They launched E-Monitor 2012 as they urged the Department of Education to strictly implement its existing orders concerning its ‘no collection policy’ for enrollment in public elementary and high schools for school year 2012-2013. This campaign is a continuation of the successful GRADFEE MONITOR 2012, implemented against collection of graduation fees during the graduation season last March.

E-Monitor 2012 will accept complaints and reports from parents, guardians, and concerned citizens through the following: 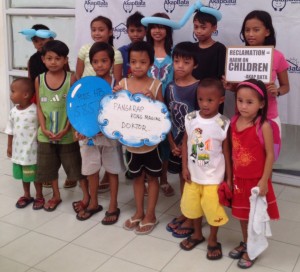 The campaign will run through to the opening of classes on June 4. This will also cover the monitoring of the initial implementation of the K+12 program in June. According to Secretary General Arlene Brosas, “We are calling on parents and guardians of enrolling students in public elementary and high schools this year not to hesitate to contact us for complaints and reports concerning collection of any fees required for enrollment of their children’s this school year. Rest assured that the identity of our callers will remain confidential.”

Brosas stressed, “As education remains one of the basic rights of every Filipino child, financial constraints must not be an obstacle for young Filipinos to be denied to access free, accessible and quality education. Our government must ensure that the ‘No Collection Policy’ will be strictly implemented, especially that enrollment is on-going on various public schools nationwide, and that the issue of fees as requirement for enrollment must be eliminated in order to ease the problem of the growing number of out-of-school children.” 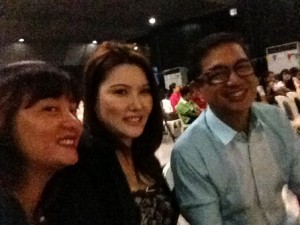 Provisions in the aforementioned orders include the following:

Related:  PRESS RELEASE: Sexual health is important to all Filipinos, not just women