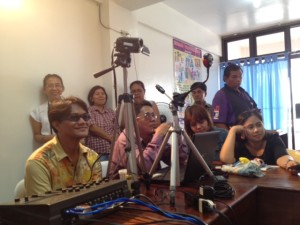 The Philippine Information Agency Region 4-A (PIA) and Andrew Grace Home Builders (AGHB) celebrated International Women’s Month with a special Talakayan press conference on March 20, 2012 at the new PIA building along Halang, Calamba City. Participants in this special event were from Radio Veritas, Magic Newspaper, Kliping Times, DZJV and Radyo Natin, among others.

The main objectives of the event were: for media practitioners to disseminate and promote the importance of women in building the nation; to recognize the value of women throughout their lives instead of just during March; and to be aware of the current situation in legislation that is related to women’s rights. In CALABARZON there are 22 local newspapers, and the Talakayan aimed to have an extended reach across all five provinces. 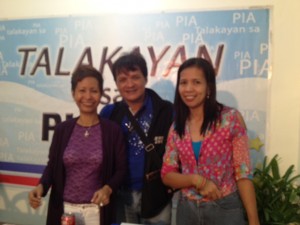 The topics discussed at the Talakayan covered legislature on Anti-Violence Against Women and Children (AVAWC), the Magna Carta of Women, Justice for Rochel Geronda, the Reproductive Health Bill situation at Congress, the roles of NGOs, and the question of when life begins from the points of view of different religious groups and medical practitioners.

The notable speaker for the event was Elizabeth Angsioco, the Chairperson of the Democratic Socialist Women of the Philippines (DSWP). She is a columnist for the Manila Standard, and she is the President and Executive Director of the Support Service Institute for Women (SIW), Inc. She is also the Chair for the Legislative Advocacy Committee of the Reproductive Health Advocacy Network (RHAN), as well as a member of its Steering Committee. 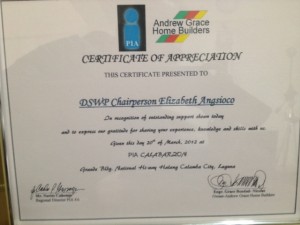 We chose Angsioco as a speaker because of her achievements in helping communities. For her work toward the empowerment of women, particularly those in poverty, she has been awarded numerous citations and certificates of recognition by various community-based women’s organizations, as well as other NGOs in the country. Angsioco was also the recipient of the Globe Tattoo Award as The Advocate for her advocacy work supporting the RH bill, and other the passage of pro-women laws. These laws included Anti-Sexual Harassment, Anti-Rape, Anti-Violence against Women and their Children, Anti-Trafficking in Persons, and the Magna Carta of Women.

Internationally, she was a recipient of the 2004 Silver Rose awarded by NGOs in Denmark: an award recognizing excellence in human rights and development work. She was also cited for her initiatives in livelihood development, policy advocacy, and political participation. Previous Silver Rose awardees included Aung San Suu Kyi of Burma, Nelson Mandela of South Africa, and Ricardo Lagos, the president of Chile. In turn, Angsioco established an anti-Violence Against Women fund from the Silver Rose cash prize. The fund has given legal, medical, and other assistance to rape, incest, and domestic violence victims.

NGOs play a vital role in society today, and have a considerable impact on nation-building, particularly on the grassroots level. The DSWP has helped by assisting in many livelihood provisions for poor women in Luzon, Visayas, and Mindanao. Through the implementation of these projects that benefited around 7,000 families of women in poverty, DSWP has trained around 1,000 grassroots women leaders in politics, developed their skills, and assisted them when they ran in elections at the barangay and local government unit (LGU) levels.

The DSWP has also provided assistance to at least 10,000 families victimized by calamities like typhoons, floods, volcanic eruptions, and other disasters. It has facilitated access to social protection through the micro-insurance of more than 7,000 women and their families, and has organized education and skills training to poor, unschooled women. It has also facilitated the organization, advocacy, education, and skills development of women workers in the informal sectors that led to the establishment of AKSYON Kababaihan!, a national federation of more than 300 organizations of women in the informal economy. Most recently, it has helped establish Young Women’s CHOICE, a national organization of poor young women providing guidance on the issues of Sexual and Reproductive Health and Rights (SRHR).

Related:  More than a Boyfriend