“Never be afraid to raise your voice for honesty and truth and compassion against injustice and lying and greed. If people all over the world… would do this, it would change the earth.”

This is the conclusion in a series of articles written by contributor Jonathan Monis. Nathan is a member of the Youth Consortoium for the Passage of the RH Bill, as well as the Alliance of Young Nurse Leaders and Advocates (AYNLA).

In the earlier parts of this article series, I discussed the current status of Millennium Development Goal 5 in the country, which is considered the least likely to be achieved by 2015. It showed that the Maternal Mortality Rate is declining but the slow progress cannot keep pace with the target in 2015.

I also tackled the importance of a comprehensive policy on women’s health for meeting MDG 5. I elaborated on examples of national and local policies that contributed to the advancement or descent of reproductive health and maternal health in the country. Now, I will discuss further about the role of people in the achievement of MDG 5.

It is not new to Filipinos to blame the government for its failure to legislate and implement policies, or respond immediately and strategically to the problems and needs of the public. We often say they should do this or that instead. We always say that we have lame officials who know nothing aside from using politics as a business for power and money. On the other side of the argument, we should ask ourselves: what are our contributions as part of society to improve the lives of people, aside from endless rants and blames? 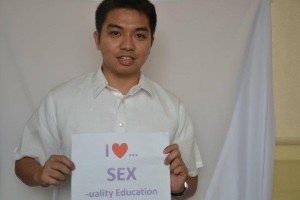 Advocacies and constructive engagements are forms of meaningful participation in governance, and are crucial to nation building. Advocates are usually people with keen senses for policy provisions and implementation. They are palpable in different levels of governance, from local to national. Moreover, they know the dynamics, especially at the grassroots level, in which services should be felt the most.

Nowadays, there are several ways to advocate, from the traditional street protests and advocacy events to the new (and becoming more popular) social media. Street protests and events-for-a-cause are eye-catching. They draw the attention of the public and government officials, especially if done massively and strategically. It is an established means of voicing the concerns of the public, and of showing support for a cause. With the advancement of communication, social media venues are now popular sources of news and information. They provide real-time information, which is often faster than traditional media outlets.

Social media is a popular stage for providing opinions, and for having public debates and discussions on various issues. Online and social media campaigns have been critical in communicating to people the value of assisting our countrymen who are in need. For instance, social media helped in raising awareness regarding the Sendong crisis thanks to several online campaigns.

However, there is still a big gap between the people who campaign and debate online, and those who actively participate outside the social media sphere. Online avenues are critical for people to be aware of situations and current social issues, but if we are critical enough and we really want to be part of the change, then it should be translated to engagement with the government.

Advocacies and engagement in government are crucial for fast-tracking MDG 5. Men, women and young people should be critical with current policies and programs. Advocacy became an instrument for the mainstreaming of the RH Bill, for instance. Advocates conduct nonstop campaigns so that legislators and the public alike know the current maternal and reproductive health situation in our country, as well as the provisions and real intentions of the bill. The famous “11 maternal deaths a day” catchphrase of women’s groups and the “PRO-RH is PRO-YOUTH” banner of young people have contributed to the current status of RH Bill.

MDGs are not just international contracts. They are also social contracts with our fellowmen. We should take into account that each goal and target signifies human lives: lives that should not be forsaken, and lives that should be improved. Hence, achievement of MDGs should be seen as more than a duty to the international community. It is, more to the point, our duty to our nation.

After 2015, there will still be maternal deaths that need to be prevented, and couples will always need to be empowered enough to decide what is best for their family.