“Sixty years have passed since the founders of the United Nations inscribed, on the first page of our Charter, the equal rights of men and women. Since then, study after study has taught us that there is no tool for development more effective than the empowerment of women. No other policy is as likely to raise economic productivity, or to reduce infant and maternal mortality. No other policy is as sure to improve nutrition and promote health—including the prevention of HIV/AIDS. No other policy is as powerful in increasing the chances of education for the next generation. And I would also venture that no policy is more important in preventing conflict, or in achieving reconciliation after a conflict has ended. But whatever the very real benefits of investing in women, the most important fact remains: Women themselves have the right to live in dignity, in freedom from want and from fear.”

Tick tock, tick tock. The clock is ticking, and we are running out of time. The first evaluation of Millennium Development Goals (MDGs) will occur approximately 3 years from now.

The MDGs are developmental international goals that were agreed upon during the Millennium Summit in 2000. There were 193 United Nations member states that committed to achieve it by the year 2015.

There are eight goals with eighteen specific and concrete targets that focus on the reduction of poverty and the worst forms of human deprivation. The Philippines is among the countries that signed the international agreement. Our country should be doing everything it can meet the targets by 2015. We are doing well with someof the goals; however, MDG Five, the Improvement of Maternal Health, is the least likely to be achieved by the target year.

The targets under Goal Number 5 are the reduction of maternal mortality rate (MMR) by threequarters by 2015 (half by 2000, half by 2015) and increased access to reproductive health services to 60% by 2005 (80 percentby 2010, and 100 percent by 2015). The MMR target includes evaluation by 2000 because a prior target on maternal health had been set even before the MDG Summit.

Maternal Mortality Rate is defined as the number of maternaldeaths per 100,000 live births. The 1993 and 1998 NationalDemographic and Health Survey (NDHS) showed that the MMRin the Philippines went down to 172 from the 1993 baseline of 209 deaths. In 2006, the Family Planning Survey (FPS) demonstrated that it declined to 162. Because of MMR’s dwindling progression, it is still far from the 2015 target of 52 deaths per 100,000 live births. This slow pace of achieving the target is due to the disturbing reproductive and maternal health situation of women in our country.

The major causes of maternal deaths in the country include postpartum medical conditions complicated by pregnancy, such as hypertensive diseases/toxemias, cardiopulmonary and renal diseases, embolic complications, metabolic and electrolyte abnormalities, infections,and even post-abortion complications. 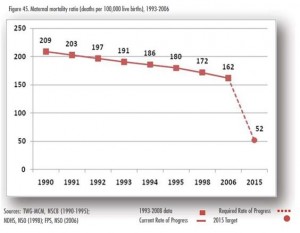 The Department of Health (DOH) has identified the main culprits of maternal deaths, around which they have developed the ‘three delays’ model. The model consists of the following: (a) delay in deciding to seek medical care (poor capacity to recognize danger signs, financial and cultural constraints); (b) delay in reaching appropriate care(lack of access to health care facilities; lack of awareness of existing services); and (c) delay in receiving care at health facilities (inadequate skilled health workers, lack of equipment, drugs and supplies).

Despite the campaigns and efforts from the DOH and non-government organizations (NGO), only 63% of pregnancies in the country are unplanned. In addition, induced abortion, which is illegal in the country, continues to rise. Because women usually subscribe to clandestine and unsafe practices, a significant number result in complications and death; that adds considerably to the overall MMR.

The next target is focused on universal access to sexual and reproductive health information and services. The underachievement of this target is due to the lack of accessible RH information and services, resultingin unplanned pregnancies. Just like the previous target, our country’s progress in achieving this target is slow. In fact, the contraceptive prevalence rate (CPR) of married womenages 15-49 years changed insignificantly from 49% in 2001 to 51 percent in 2008, based on the FPS for the same years. Twenty-two(22) percent of currently married women have an unmet need for family planning services,which is more than one-third higher of the 2003 NDHS result of 17%.

The implementation of RH education and service provision varies, particularly at the community level. It depends largely on the political will of local government officials, especially after the devolution. There are huge variations in the geographical distribution of CPR and the number of ideal children for couples, vis-à-vis with what they have. These indirectly and directly contribute to the Total Fertility Rate of our country, which has researched statistical effects on our economy.

An interesting finding has revealed that Filipino women across all socio-economic classes desire fewer children. Moreover, those who have less access to RH services tend to have more children than they planned.

Our country is still a long way from achieving MDG 5. The government has to double or triple its efforts in upcoming years if it is truly serious about its commitment.

In an upcoming article, I’ll speak furtherabout the need for a comprehensive policy on women’s health, and how critical it is to have solid legislation for sound and cohesive programs.

2 Comments on “The Status of MDG 5 in the Philippines”