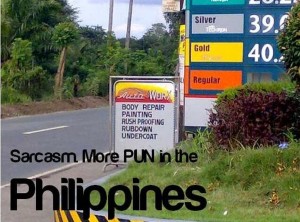 As the saying goes, timing is everything: more so when it comes to advertising.  The first few hours spell the difference between a successful ad campaign and a failed one.

With the start of another year, we were greeted by the new DOT slogan that went viral a few days after the New Year. The timing was perfect, fresh from our respective Christmas celebrations and much needed vacations. The Tourism Department reminded us that it was “more fun in the Philippines,” and with the fun-filled memories still vivid in our minds, we couldn’t have agreed more.

Just several hours after its launch, the slogan, “It’s more fun in the Philippines,” was trending in various social networking sites. Newsfeeds in Facebook were filled with various “official” photos showing things that are fun in the Philippines. The Department of Tourism showcased different tourist spots and used catchy one-liners to describe the experience.

Not content with the manufactured posters from the Tourism Department, netizens took it upon themselves to make their own personalized versions of the catchy ad campaign. A lot of them had their own pictures adorned with the slogan. The funnier, the better, and with the trademark Filipino Humor, the one-liners became more and more amusing.

Like picture badges and logos on Facebook, several enterprising Filipinos set up do-it-yourself websites that made it easier for people to make their own campaign ads. Links to these websites went viral, of course. Making your own DOT campaign ad became as easy as uploading pictures, with no Photoshop experience necessary.

At first it was just pictures of different fun moments, but it didn’t take long before the puns started to appear.  Posters with double meanings started to appear: “Rugby National Team. More fun in the Philippines,” with an image of of teenagers inhaling the addictive adhesive. Another poster had several men playing cards while drinking alcohol in the middle of the day, stating: “Unemployment. It’s more fun the Philippines.”

I found it offensive at first. Early on, my friends and I decided to stick to positive messages, but with the appearance of these satirical pictures, I was amazed by how the innocent and wholesome campaign was turned into a political photo commentary of several realities in the country. Aimed as a means to attract tourists to the country and although merely showing realities, I felt that these satirical, sarcastic posters could breed negative feelings among those we wish to entice to come to the Philippines.

But as more and more of those double-meaning pictures appeared, it became apparent to me that it was just a manifestation of a very distinct Filipino trait of making fun of even the most serious of issues, and the almost irreverent Filipino attitude of laughing at everything in life. These pictures show more than just different scenes in the country: they also showcase the Filipino sense of Humor. They should not be taken too seriously; after all, they’re made for fun.

It was not all fun, though. Early comments on the slogan were generally negative, and some people claimed that the slogan was not original but a copy of the campaign Switzerland had in the ‘50s.  Fortunately, the negative comments were later overshadowed by the enthusiastic ones, and before we knew it, everyone was having fun making and sharing those campaign ads.

With the DOT saying that the campaign is a success, only time will tell if it will truly be one. It may have caught the attention of Filipinos online, but we will have to wait and see whether foreigners would be enticed enough to come to our beautiful country.

All in all, these campaign ads, whether the satirical, the “official” or even the personalized ones, tell us one thing: Filipinos really do know how to have fun, and these witty one-liners are just proof of our ability to poke fun at just about everything.

It is definitely more pun in the Philippines.