I was an activist in college. I was a true-blue (or red, for that matter) flag-waving, card-carrying, megaphone-wielding activist. I never missed a State of the Nation Address or Labor Day demonstration. I was always in the front lines. I had been tear-gassed, hosed down, and chased by riot police. The idealist in me refused to be held down. I had an opinion on every national issue and I detested those who did not care. I endeavored to educate those who were kind enough to listen to my rants. I hated corrupt politicians with such an intensity that I refused to talk to relatives who were suspected to be corrupt.

But I was not the militant, armed-revolution type. I was a reformist of sorts. I had my ideas about how to change and improve the system: how change can be initiated from within. I was so sure that I needed only to be part of the system to be able to initiate these changes. I was pretty sure that I could show everyone the light. When the time came for me to graduate, I did not hesitate to enter the civil service. Full of idealism, I figured, I could be the spark for the change I so long prophesied. 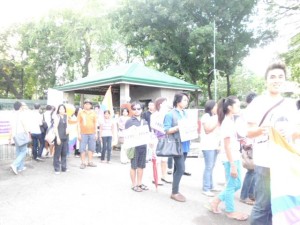 I couldn’t have been more wrong.

My first job was in a government corporation tasked to provide a basic need. Being a national funding and monitoring agency in the provision of one of the most basic needs, the agency had several projects in different parts of the country. Not a day passed by without a contractor visiting to “consult” with the administration. Working in the office of the head of agency, and later on as an assistant to one of the board members, I had several firsthand experiences with dealing with these contractors.

Through the years I spent liaising on behalf of my bosses, I realized how easy it was to give in. Even the most ideal of all employees could easily be corrupted. Worse, corruption was not only present in the higher echelons of the government, but in almost every level as well. You didn’t have to do anything; you didn’t even have to ask. It was there, ready for the taking. You needed only to open your hand.

To say that I was never tempted would be a lie. I was tempted, but still I persevered, not giving in to the temptations of easy money. I needed only to close my eyes to remind myself of all those promises I made when I graduated from college.

Maybe it helped that I had a boss who shared my beliefs and tightly held principles. Knowing that my boss would never give in to the temptation gave me the courage to hold my ground and say no. But it was not long after that my boss and I were “eased out” of office. The powers that be decided that my boss, a staunch critic of these irregular projects, had to go. We were asking too many questions.

So ended my stint as a government employee. I might not have accomplished my lofty goals of changing the system, but I was comforted by the fact that I left government service unscathed. I could proudly say that I faced temptation and survived. I might not have been part of the solution, but I did not become part of the problem, either. Not really a victory, but I knew I could go back someday and not be beholden to anyone.

But, as I see it, two things can happen. These idealistic people would either be able to end the cycle of corruption in government, or they would find out that it’s hard to resist the welcoming arms of these corrupt individuals and simply fall in line and give in. Just as I realized before, they might see that it’s one thing to be critical of the government while outside the system, and a totally different matter when you are part of the system.

The temptation will be strong. It will not be long before they might get used to the perks and privileges given to government officials. The free trips and junkets, the use of government assets and monetary benefits they so criticized before might become a norm for most. I just wish that they will be able to resist the temptation and remember the things they originally promised the nation. It will be a test of their will and their sincerity in serving the country. Only time will tell.

As for me, I can firmly say that I have held on to my beliefs, and although I may not be as idealistic as I was several years ago, I know that I have what it takes to stay on the straight and narrow path. Something only a few people will be able to say and do.