The Reproductive Health Bill has been in Congress for 10 years. Yes, that means ten years of endless debate about the effects of pills on women, when life begins, if modern contraceptives are abortifacient, and if Comprehensive Sexuality Education (CSE) will make young people go under the ipil-ipil tree and have sex after they receive a condom. It went through three Congresses and is equivalent to a decade of sacrifices among the advocates and champions.

RH Bill’s nitty-gritty has gone through scrutiny through long discourses and grandstanding interpellations among the villainous legislators. There were several attempts to dispose of it or water it down. There have been attempts to undermine it, such as the Protection of theUnborn Child Bill and the bombardment of its decisive provisions. There have also been external attempts, such as the filing of absurd local ordinances that are unconstitutional and against human rights and principles.

To sum up the past ten years, six versions of the bill have been filed and a number of revisions were implemented until consolidations led to HB 4244, the version currently being discussed.

Sadly, ten years of delays and dirty tactics also mean hundreds of thousands of young people who are uneducated about their bodies and their options. It likewise corresponds to current HIV statistics of 8 cases per day, of which a huge number are young people. Ultimately, it has resulted in more than 40,000 lost lives of mothers due to pregnancy and childbirth-related complications, which could have been preventable if only the provisions under the RH Bill were already in effect. 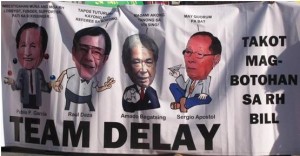 Team Delay is one of the culprits behind why the RH Bill has been in Congress for 10 years.

The pressing situation of the Filipino people is no joke, and should be taken seriously by those in the government. These serious matters are equivalent to the lives of Filipinos. Serious matters are not worthy of an hour-long suspension of a House session to fill the hungry stomachs of our legislators, or a grandstanding speech to talk about the number of punches Manny Pacquiao landed on his enemy. It doesn’t deserve conspiracy theories and pulpit-like arguments. Serious matters should neither be delayed nor blocked.

These actions by those in power are not worthy of even a cent of the people’s money. I am saddened that we have these kinds of people as our representatives. These representatives should be supporting the voices of their constituents and defending real solutions to the problems of the people.

For the advocates, ten years is enough. In fact, for a serious matter like this, a proper resolution is long overdue. The RH Bill should have been resolved long ago. The advocates are crying out for a verdict on this bill: to put it to a vote.

Defending the RH Bill is a serious battle: a battle for human rights. It is a battle for every poor Filipino to know their options and have access to services to plan their families, because each one of us deserves to have a better quality of life. It is a fight for women’s empowerment and equality, so that they may know their rights and decide what is best for their own body. It is a cry for mothers’ lives not to be forsaken, and on behalf their families who have lost an important person in their lives. It is a struggle for this terrible occurrence not to happen again.

For young people, it is a battle to strive against ignorance, to be educated about their bodies, to have better values and to be responsible towards a better self and future. It is also about the improvement of our system: to resist the status quo and break a decaying system; to be more responsive and provide better services to all, especially among the poorest. 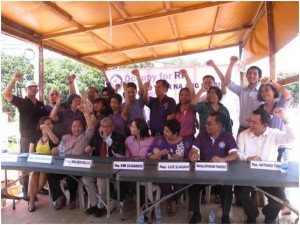 RH advocates launched the Occupy for RH campaign to demonstrate the voices of RH believers.

Advocates occupied the SB Park adjacent to the House of Representatives to send a message to the legislators: the RH Bill is a serious matter. The advocates would neither be weakened nor be moved. They would endure the heat of the sun, and the chill of the night and the rain. With strong hearts and willful minds, the advocates would patiently wait and camp out because they are impatient with the system, and sick and tired of endless tricks delaying a serious matter.

The RH Bill is our fight, and is for our benefit. We should take part, clamor for change, and fight to defend it. This is not just a battle for the future, but also for the preservation of the present.