Rafael is a Journalism major in the University of the Philippines Diliman. He teaches campus journalism at a private school in Bulacan. 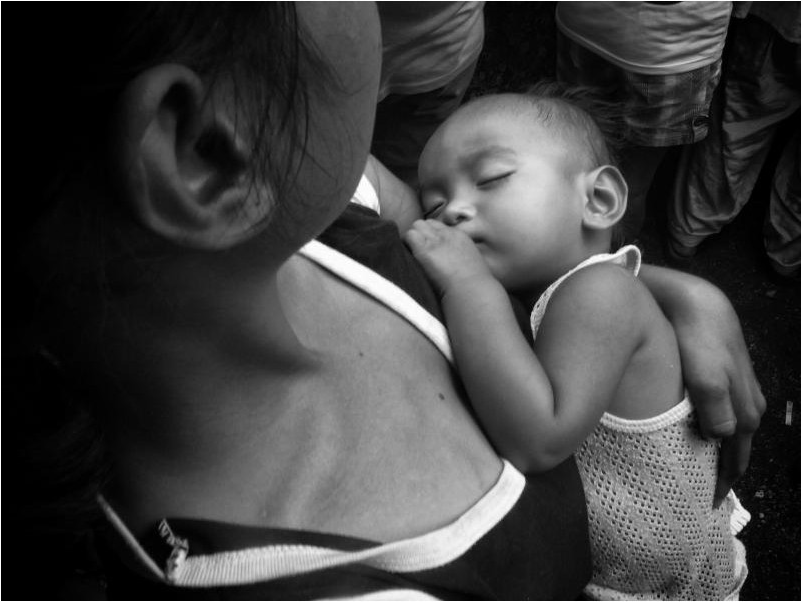 This photo was taken on December 19, 2009 in Malabon. View the original here. Photo by Oliver Pensica.

Jenny was carrying a crocodile in her left palm, the traditional healer said. How it got there exactly the traditional healer didn’t know, much less why it chose Jenny as its host, of all women. He probably must be right, because, how does one explain the deaths of her first two babies? It could have been something malevolent yet unseen, like a baby-eating crocodile.

At 33, Jenny Bilonio, a photocopying machine operator at the University ofthe Philippines, Diliman, has survived the deaths of two sons who could have been her first and second born.

The first one died in a miscarriage in 2004. Jenny’s memory of the situation was sketchy, she being in pain and drugged the whole time. She was riding a tricycle one morning on her way to the pharmacy to buy vitamins for herself when her womb started to ache. “[Sa] sobrang sakit, nahimatay ako (The pain was too much I passed out).” she said. She was already in the hospital when she came to herself, surrounded by her husband and family.

“Na-aswang daw ako (An aswang preyed on my baby),” she says. Her mother told her that neighbors saw a tiktik trailing the tricycle she was riding from her house in Baranggay Kaingin II in Diliman, Quezon City to the pharmacy that morning. Philippine folklore describes an aswang as a creature that preys upon unborn and newly-born babies. A bird circling the roof of a pregnant woman’s house at night is a sign that an aswang is nearby. Jenny hails from Iloilo and belongs to the Tausug ethnic group, who have strong beliefs in the supernatural.

Jenny had never gone to any prenatal check-up in the entire five months of her pregnancy.

“Bago pa lang ako noon. Hindi ko pa alam ang gagawin, (It was my first pregnancy. I didn’t know the right things to do)” she said.

Probably caught in the flurry of the incident, no one among Jenny’s family had the mind to claim the fetus from the hospital staff. Nor give the boy a name.

“May bayad pa kasi iyon,” Jenny said. “ E wala kaming pera noon.” (We would have to pay to claim the fetus, but we didn’t have money then.)

“Hindi pa siguro talaga para sa amin,” Jenny said. (It’s probably not the right time for my husband and I to have a child)

Two years after the miscarriage, Jenny conceived again. This time, she made sure that she went to regular prenatal check-ups at the local health center in her baranggay, where she was also given free vitamins.

The nine months passed without any problem until her due date, April 6, came. Her labor started at early morning, with Aling Maria, the hilot or traditional midwife from the neighborhood, aiding her.

The hilot, an elderly woman in her 70’s, coaxed her to push. So Jenny pushed and pushed until dusk. A trained midwife from the health center also came to assist in the delivery. The baby came out dead.

According to the 2008 National Demographic Health Survey (NDHS) conducted by the National Statistics Office from 2004 to 2008, less than half, or 44 per cent, of births are delivered in a health facility, such as a hospital, either public or private. The 56 per cent were delivered at home.

The NDHS points out that the number of births attended by a health professional is a slight increase from the 60 per cent from the previous survey done from 1998 to 2003. Still, 62 per cent is still far from reaching the number prescribed by the Department of Health, that is, 80 per cent from 2004.

“Hindi kasi ako marunong umiri. Saka, maliit ang puwerta ko. Kung nasa ospital ako, ginupit iyon. (I couldn’t properly push the baby out. Besides, my vaginal opening was too narrow. Had I given birth in a hospital, the doctors might have cut one end of my vaginal opening).

Then again, like the first death, it could have supernatural causes as well, as what a traditional healer said: Jenny was unknowingly keeping an unseen crocodile in her left palm. She had better get rid of this reptile soon or any pregnancy would always result in death. By whispering some orasyon or spells on Jenny, the healer drove the crocodile away.

If the traditional healer is to be believed, Jenny’s sons are two of the 177 babies eaten by the so-called crocodile and the rest of species from 2004 to 2008.

According to the NDHS, 94 cases of these deaths are stillbirths, or occurred after the first seven months of life had been completed. The eighty-three remaining cases happened from the time of delivery to the first seven days of life, classified as early neonatal death.

This means 28 out of 1,000 pregnancies in the Philippines ends with a dead baby. This rate is higher than that of the previous survey, where perinatal death or early infant mortality had a rate of 24 for every 1,000.

While the presence of the crocodile in Jenny’s palm meant the lives of her two sons, for a large number of Filipino women, it cost them their own lives. Data from the United Nations Children’s Emergency Fund show that for every 100,000 deliveries, 230 women die. This number has set off alarm bells for concerned agencies such as the UN Forum for Poverty Alleviation (UNFPA) which deems it very high compared to those of neighboring countries. Thailand has listed 110 deaths for every 100, 000; Malaysia, 62; and Singapore, 14.

A report by the Integrated Regional Information Networks (IRIN), a humanitarian news website, cites hemorrhage, sepsis, obstructed labor and hypertensive disorders during pregnancy as the frequent causes of maternal deaths in the Philippines.

Related:  PNGOC is still accepting abstracts for presentations and posters!

The large gap between the poor and the rich, as well as between rural and urban dwellers, in terms of access to maternal health information and facilities contribute a lot to the burgeoning number of maternal deaths, the report say.

This has led the United Nations to assess the efforts of the Philippine government to decrease maternal mortality, one of the eight Millennium Development Goals, as low. The present rate is way above the set rate of 55 to 60 deaths per 100, 000, which will remain unattainable even after 2014. The Millennium Development Goals is a set of goals to eliminate poverty, which was signed by the 192 member nations of the United Nations, including the Philippines.

Four years since her first birth mishap, Jenny was pregnant again. Older and wiser now, and with a help from a female professor she chose not to identify, she regularly went to prenatal check-ups and booked herself at a nearby hospital. On February 1, 2008, she gave birth to her third son who would be the first to survive since her crocodile episode. Two years after, on October 2010, she once again gave birth to another son.

Maternal and infant health care are probably the least talked-about aspects of the controversial Reproductive Health Bill. The House Bill 4244, the consolidation of six reproductive health bills in the Congress, provides for the “respect for, protection and fulfillment of reproductive health and rights” of every citizen. This includes disseminating information about family planning methods, including the use of contraceptives and condom – the aspect hotly contested by the Catholic Church.

In a pastoral letter by the Catholic Bishops’ Conference of the Philippines (CBCP) titled, “Choosing Life, Rejecting the RH Bill,” CBCP President Bishop Nereo Odchimar condemns contraceptives as “fatal to human life, either preventing it from fruition or actually destroying it.”

“In truth, contraceptives provide a false sense of security that takes away the inhibition to sexual activity,” the bishop says.

Jenny herself takes an injectible contraceptive medicine given to her at the baranggay health center every three months. “Mas maganda kung may spacing ang pag-aanak (It is better to put large gaps between births).”

People may think two healthy sons are enough to keep the Bilonio couple happy. However, Jenny says she has still plans of having another child. “Naghihintay pa ako ng isang babae, (I still want a daughter)” she says. A daughter to tell her story of how she conquered a crocodile in her palm.