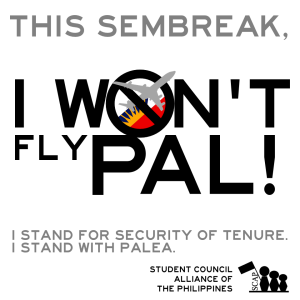 As they take their semestral break, student councils urged their fellow students to boycott Philippine Airlines following a row with the airline’s labor union. The Student Council Alliance of the Philippines [SCAP] said in a statement that “no one can fly PAL in good conscience as their labor practices endanger young people’s welfare”.

Some 2,000 employees were retrenched by the PAL management favoring an outsourcing scheme for its ground crew. The Philippine Airlines Employees’ Association or PALEA has denounced PAL’s government-backed retrenchment plan labeling it as “fire-at-will employment”. Members of the labor union have been in a protest camp-out at PAL In-Flight Center near NAIA Terminal 2.

“It is dangerous to fly PAL”, quipped University of the Philippines-Diliman College of Social Sciences and Philosophy Student Council Chairperson JC Tejano. “The outsourced ground crew is clearly inexperienced and we cannot take reports of mishaps lightly”. Various flyers on Twitter and Facebook have reported on the difficulty of the PAL ground crew in rendering service.

SCAP has also taken the side of the labor union on the labor row. “PAL also endangers the welfare of young people in another level: that of taking contractualization and minimal benefits for workers as the norm”, said SCAP National Secretary-General Gibby Gorres.

Gorres pointed out that Malacanang’s stand of allowing the retrenchment plan may serve as precedent on the struggles of labor. He said that the welfare of young people is at stake when the government fails to see the national welfare in the struggle of PALEA.

“We do not want to enter the labor force where workers are oppressed”, added Gorres. #