Alvin Dakis is the founder and president of AYNLA: a national nursing advocacy organization that helps in HIV awareness advocacy worldwide. He is also an HIV educator and speaker, and he blogs about health and social issues. Email him through alvin(dot)dakis(at)aynla(dot)org.

There are no ‘hush’ signs for Victoria Court‘s “Stop HIV Campaign,” a component of their 25th anniversary celebration on July 29, 2011. The motel franchise is continuing its support of the global campaign against HIV and AIDS through cause-driven events.

The “Stop HIV Campaign” aims to further inform people about HIV and the issues attached to it. This year, Victoria Court is collaborating with different HIV advocates and celebrities to come up with a “Stop HIV” advocacy video. The video will convey messages about the disease to the public, including information about how to prevent its transmission. 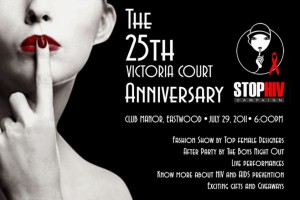 The National Epidemiology Center of the Department of Health has released its HIV/AIDS Registry for May 2011, and has recorded 184 new sero-positive cases. 92% of these cases are males with the median age of 28, but young people aged 20-29 count for the most number of cases. Sexual contact still accounts for the highest rate of transmission, followed by the sharing of non-sterile drug needles. For sexual contact, males having sex with males still remains a predominant cause.

Despite the country’s apparently low prevalence of HIV, the exponential rise of new HIV and AIDS cases in the country has been a great concern. Just this year, the country has been listed as one of the seven countries in the world with a steadily increasing HIV infection rate, together with Armenia, Bangladesh, Georgia, Kazakhstan, Krygyzstan, and Tajikistan. The Philippines has had more than a 25% increase in HIV incidence since 2001.

Efforts to address this increasing concern are being conducted through mass media. Celebrities speak about HIV in various venues, such as with the hosts of Boys Night Out. HIV advocates gave their strong messages to continue fighting the disease & for keeping safe.

Ana Santos, a journalist, sexual health educator and HIV advocate, says that her having met mothers who have been infected by HIV made her want to do something to inform people about it, and somehow reduce the stigma and discrimination against People Living with HIV (PLHIV). “I simply could not let HIV affect another person I love,” Ana said.

Victoria Court’s 25th anniversary is not just about having fun and celebrating their wondrous 25 years: it is also about raising awareness and combating HIV infection in the country. Their “Stop HIV Campaign” video will be launched at the July 29 event, and shall be shown at all Victoria Court branches.

The event will also try to provide an area for confidential HIV testing and counseling with the help of HIV advocacy groups. In this way, Victoria Court and its partners for the campaign can increase awareness of HIV and encourage people to be voluntarily tested.