Alvin Dakis is the founder and president of the Alliance of Young Nurse Leaders & Advocates International Inc. (AYNLA), a national organization of nurse advocates. He is also a blogger & youth leader. Email him through: Alvin.dakis (at) aynla.org.

Contributions from all sectors, especially the youth, are welcome on Mulat Pinoy. Popdev stories cover many issues; while reproductive health is a frequent topic of discussion, articles may also discuss population in relation to the environment, employment, education, food supply, gender, religion, housing, health, and others. Send an email to popdev (at) mulatpinoy (dot) ph. 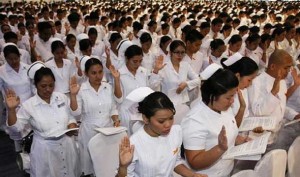 Filipino nurses have been known to be among the most caring nurses in the world – the kind that many foreign nationals would prefer and trust. This brand of excellence became the Philippines’ banner for sending its nurses to the world market. This made the Bachelor of Science in Nursing an instant ‘National College Course’ of the country.

The nursing profession in the Philippines has its foundations from the time when Filipinos were very superstitious, and their notions of health and sickness were often associated with mysticism, spirits, witchcraft and herbal medicines, some of which some still exist. Hospitals and schools of nursing were first built during the Spanish regime, and during the Spanish Revolution, prominent personages became nurses to their wounded comrades: Trinidad Tecson, famously known as Ina ng Biak na Bato; Agueda Kahabagan of Laguna; Melchora Aquino, also known as Tandang Sora; and Josephine Bracken, the wife of Dr. Jose Rizal, who installed a field hospital in their estate in Tejeros.

From its silent beginnings, the Philippine nursing profession grew to become a major player in the global healthcare market when it became the biggest supplier of registered nurses due to the global nursing shortage. Schools of Nursing grew tremendously, from 17 schools in the 1950s to a soaring 491 in 2010, averaging 40,000 graduates each year by most recent assessments. The number of registered nurses in the country is now reaching 600,000: more than thrice the number of other health professionals in the country combined.

We have produced thousands of nurses but have only employed less than 50,000 nationwide. More than 287,000 are now unemployed or underemployed in the country. The Department of Health recommends that 1 nurse should serve 10 patients, but looking at our current health system, 1 nurse serves more than 50 patients in a public hospital. This ratio becomes even worse in public health communities, where 1 nurse has to serve more than 50,000 residents.

We produce more than 40,000 nurses every year, compared to 2,000 midwives, and the numbers continue to pile onto the hundreds of thousands of nurses eagerly waiting to land a nursing job or career in the country. This kind of abundance, however, is in opposition with the view that public health only has a meager number of health professionals. This scarcity in health professionals, especially among nurses, is so vast that only around half of the ideal human workforce is tasked to do the job, depreciating the quality of nursing service each nurse renders to his or her patients.

January 2011 marked another expose that brought controversy to the Philippine nursing profession after the 2006 nursing board exam leakage scandal. This time, the issue revolved around professional, registered nurses who would volunteer their professional services to some hospitals, clinics and centers to gain “working experience” with the hope of landing a proper job, getting certificates of volunteer work thought to help them gain more possibility of leaving the country for work overseas.

The allegations of different nursing organizations to different hospitals and institutions exploiting nurses by charging fees for volunteering their professional services in their facilities sparked an issue that caught the attention of the media and legislators. Mainstream media aired the varied allegations, justifications and statements for about two weeks.

Related:  SWS Media Release: Hunger eases to 15.9% of families; 48% rate themselves as Mahirap or Poor

The Philippine Senate, through its Committee on Health and Demography, deputized the Department of Health (DOH) to conduct a thorough investigation on the matter. The DOH then created an ad hoc committee composed of the DOH Health Human Resource Development Bureau and other invited nursing organizations who were present during the Senate inquiry. The ad hoc committee recently finalized its recommendations and passed these to the DOH. The House of Representatives, on the other hand, also conducted a parallel Congressional hearing. Gabriela Women’s Party representatives also filed a call to action to the Philippine President to immediately act on the issue: call the current practice exploitative, and halt its operation.

2 Comments on “A Nation of Nurses: The Future of Philippine Nursing, Part One”