June 21, 2011 – PAYATAS. The mere mention of the word will make one conjure images of a place full of filth, of poverty and hopelessness.

Every night hundreds of dump trucks all over Metro Manila and nearby provinces snake their way through Payatas. They carry hundreds of tons of dirty proof of man’s wasteful ways. They leave in their wake a foul stench that fills the already polluted air of the city, followed by hordes of disease -carrying flies.

Imagine an army of scavengers eagerly anticipating the arrival of the garbage convoy, slowly making their way up to a mountain of trash unloaded by the trucks. They are immune to the rotting smell of garbage collected from all over Metro Manila. For most of them, it is an opportunity to earn something, just to have some money to buy them food for the day; to survive one day at a time until the next dump trucks come along. 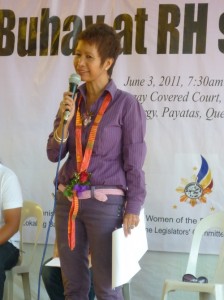 These were the images and thoughts in my mind when I got the invite to join “Buhay at RH sa Payatas,” an activity organized by the Democratic Socialist Women of the Philippines (DSWP). The June 2 event marked the launching of the Purple Ribbon campaign for the Reproductive Health Bill at the communities at Payatas. I gladly accepted the invitation as a volunteer for the event. Finally, I had a great opportunity to see the real Payatas, up close for the first time.

I went with the DSWP Team led by Rhoda Avila to the Barangay Payatas Covered Court venue to prepare for the big event. Along the way, we saw trees and electric posts tied with the RH Purple Ribbons that were adoringly put up by the women of the communities. We immediately set to work to prepare for the day’s activities. The DSWP ladies (Roses of the Community, I’d like to call them) were assigned different tasks for the event. One group was responsible for working on the multimedia presentation. They came in with their various techie gadgets like real media professionals. Another team went to prepare the registration table with leaflets, RH buttons and garlands for the guests.

I quietly observed these women of the DSWP with awe and admiration. They put their hearts into their work for the success of the event and to make it matter for the community.

The sun was already up and shining brightly that morning. It was a good day to learn and to take action for the community. The women came in early. Some of the mothers came with their children in tow, and I saw one pregnant lady carrying a toddler in her arms. Women of all ages came in groups, too. I saw a group of elderly ladies chatting as they took their seats. There were teenage girls (who all seemed to be pregnant) in a huddle at the registration table. Teenage boys in the crowd who all looked eager to learn were also mingling with the crowd.

One thing that I noticed about the people of Payatas was that they were all smiling.

They all seemed excited to be participating in the Purple Ribbon launch. The Barangay Payatas covered court turned into a sea of purple ribbons and purple bandanas. They proudly wore RH Now buttons on their shirts and their scarves. One thing was clear about them: They were there to show full support for the RH Bill.

The speakers took turns narrating their stories about life in Payatas. Each explained the need for women to understand their reproductive health right s and how a poor community like Payatas would benefit from the RH Bill. 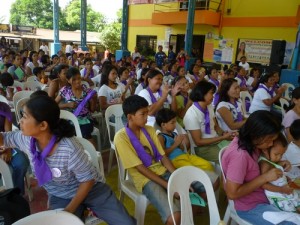 Elizabeth Angsioco, chairperson of DSWP, deliverd an update titled “Kalagayan ng RH sa Pilipinas at Tugon ng Reproductive Health Bill,” where she expressed the urgent need of women for reproductive health education and services, especially for those in poor communities. She also reiterated the need to continuously engage communities to keep them informed and updated on the latest developments on the RH Bill, countering some sectors’ disinformation campaigns with facts.

I saw women nod in agreement and discuss among themselves the merits of the RH Bill. Even young people were reading the pamphlets about it. They wanted to know, and they should know because it is about their future.

A letter read by community leader Lilia Jopson really told the true story of the women of Payatas. “Aling Lilia,” as she is fondly called in the area, said: 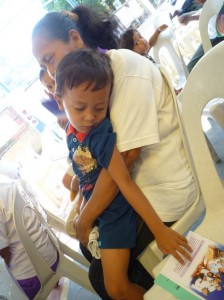 The speakers led the people of the community in reciting the pledge, “Panata ng Pakikiisa sa Purple Ribbon for RH Campaign,” to signify their support for the RH Bill. The volunteers went around the various areas of Payatas to distribute pamphlets and stickers, and to tie purple ribbons on houses.

For the women of Payatas, there was no doubt that the RH Bill is something that they need right now. The long delay of its passage creates more risks of maternal deaths, unwanted pregnancies, and teenage pregnancies, in addition to the community’s other reproductive health concerns. The RH Bill was made to help people like them have better access to information and reproductive health services.

As I gave the community one last look before I left, I was sure that it wouldn’t be my last, and I would return to Payatas soon.