Be your own girl, and maybe try to inject some of Angelina Jolie’s sass into your life. 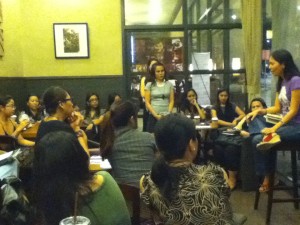 That was some of Tweet Sering’s sage advice. Sex And Sensibilities’ Talk SASsy to Me was held at Bo’s Coffee in Glorietta 5 on May 9, and author Tweet talked about her new book, Astigirl. What was supposed to be a quiet book discussion turned into a night of girl power, affirmation and camaraderie.

I had never met Tweet before, but I had heard of her. She was this young writer, award-winning, smart, probably the writer I envisioned myself being when I was in college. College was the time when I thought—in passing—that creative writing might be the career for me, and I was on a reading spree, picking up local authors, especially women, and trying to find someone to emulate. I took the usual route: I joined a writing org, I joined contests, I wrote my poems and stories, I showed them to other people. I read and read and read.

It didn’t quite work out. For one, I discovered that I was much better at academic writing and personal essays than poems and stories. Then I realized I couldn’t take criticism. And finally, those workshops and contests never gave me time of day!

Like any other person who felt her brilliance had been overlooked by the world, I would look enviously at the names of other young writers whose work merited the attention of contest and workshop committees. I would snort and cackle, thinking, “Well, she must be so-and-so’s student, so she got picked for the workshop.” “She was probably published before. It’s not fair. They should make way for unpublished writers.” “E matanda na yan e! Dapat ako na lang, I’m younger.” “What’s the point of giving her the prize? She already has a Palanca!”

Which one of us hasn’t griped like that? How many times have you sneered at the girl with the really hot boyfriend, thinking that you’re prettier than her and she’s probably mean and stupid? How often have you thought badly of your female boss? How badly did you hate the classmate who got a higher score on the exam even if she was your study partner and you could have sworn you were smarter? 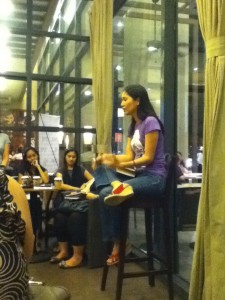 You know it isn’t right, but you do it anyway. Tweet launched into a tirade about how women compete with each other, as if they had to trample all over other women to get to the top, and maybe only then would men pay attention to them and give them time of day. While men and women are on more equal footing nowadays, it seems women have not outgrown the ruthless competitive spirit, at the cost of uplifting your fellow woman.

“When you have to bring down other women to win, you haven’t really won,” said Tweet. “You’ve both lost! Women are just trying to get to the top, where the male, the alpha is, and in doing so they battle against each other, try to bring each other down,” she said. “But really, what’s so great about being the only woman in your company? Shouldn’t that be a bad thing? Shouldn’t we want all women to be successful; to change the status of women?”

Instead of trampling over your female peers, why not find role models to emulate? While I’m no longer aspiring to be the next great young Filipino writer, I’m still reading and reading and looking for fab Filipinas to look up to. SAS’ Ana Santos is one: a single mother, she is a crusader for women’s rights and sexual health, as well as an excellent writer and a passionate, confident woman. Tweet counts Angelina Jolie among her idols, because she’s proud of who she is, and just goes and does what she wants, without apology but with plenty of grace and beauty. Akbayan Rep. Risa Hontiveros and Quezon City Vice Mayor Joy Belmonte are her local role models. “Joy is an archaeologist in addition to being Vice Mayor, and she’s so humble and down-to-earth.” Risa, in addition to being a member of the House of Representatives, is also a journalist and a single mother.

One young woman asked, “What if I have a role model, and she does something, but it’s not really me? Should I still try to emulate her?” Like an older sister giving advice, Tweet responded by saying that no woman should have to do anything she isn’t comfortable with. If your idol is doing or being something you don’t like, maybe it’s time to find a new idol, someone whose ideals and actions you actually aspire to. Another audience member chimed in, suggesting that you have to realize who and what you are, and own it, and be proud of it, because it’s you and you should be your own idol. Sering encouraged the audience to find female role models, saying, “Astigirls uphold other women.”

Astigirl: A Grown Girl Living on her Own Terms is available at Powerbooks Greenbelt 4 (hardbound and paperback) and Powerbooks Alabang Town Center (paperback only). Hardbound price is P799. Paperback is P585. Your purchase can help others through Tweet’s “Astigirl 100.” If you or your organization can sell 100 copies of Astigirl by June 1, Php 10,000 will go to the cause of your choice—be it women, children, animals, the environment—anything! If you are unable to sell 100 copies, each book will get you a P50 donation.