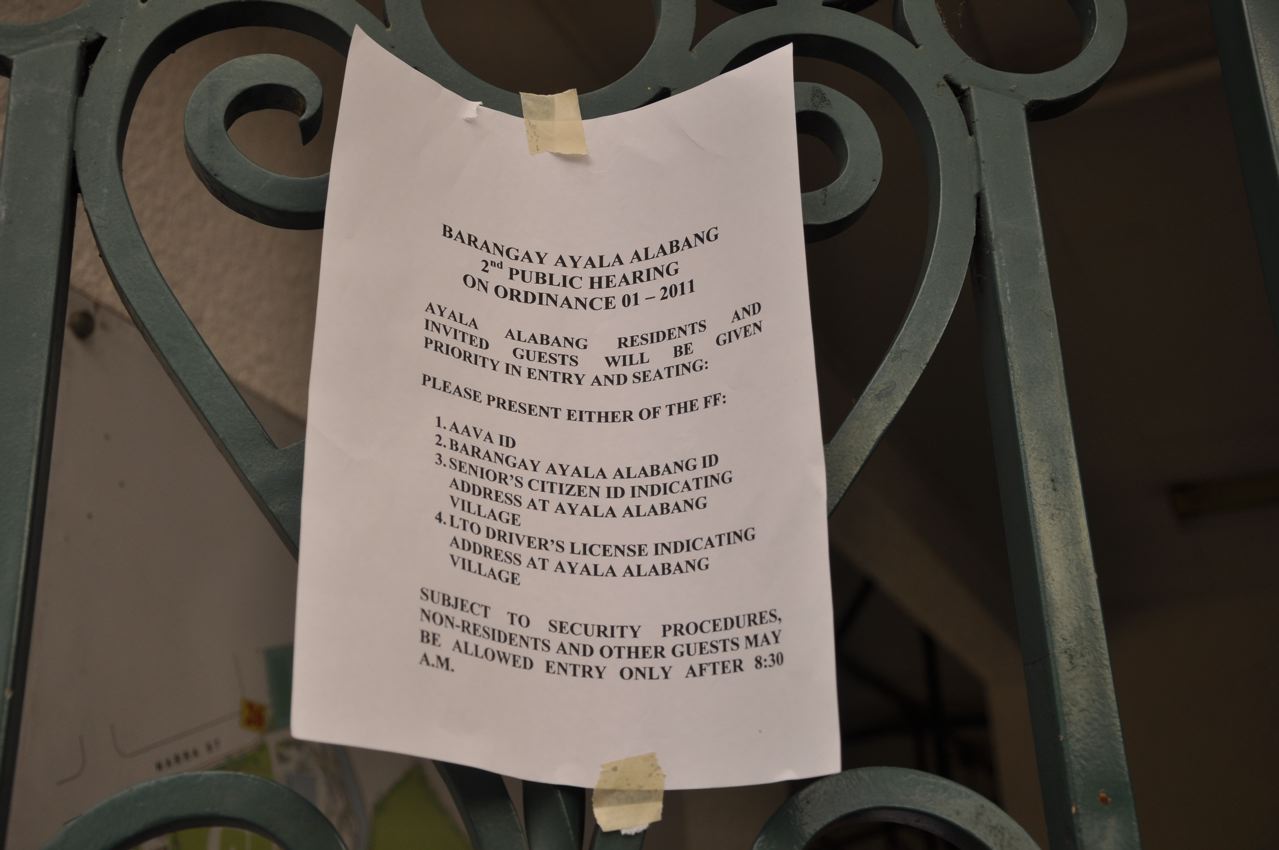 Let me tell you about the very rich. They are different from you and me.

These lines were written by F. Scott Fitzgerald, renowned fictional documenter of affluence in the jazz age, but after the controversy of Ayala Alabang ordinance #1, it could possibly apply to the barangay council and ordinance supporters as well. 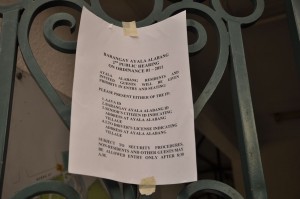 As a resident of the suburban south, I know that living in gated communities can feel like being enclosed in a protective bubble, but joining the anti-ordinance demonstration reinforced this belief. After the indignation rally, protesters were supposed to proceed to the public consultation held at the Sylvia Lina auditorium of De La Salle-Santiago Zobel. However, since pedestrians are not allowed to enter the main gate, anti-ordinance villagers had a carpool that brought demonstrators to the auditorium. Non-residents were subjected to a search, and all placards and other protest paraphernalia had to be surrendered upon entry.

Curiously, at the registration area, one had to declare support for either pro- or anti- factions. This was explained later as a measure to prevent either side from monopolizing the seating, but felt like the organizers were forcing the hand of the audience: How were the undecided supposed to register? But even without the registration, both groups were visibly marked. Pro-ordinance participants were in white, while the organized anti-ordinance participants wore yellow, or integrated the color purple into their outfits.

Outside reinforcements
Dr. Junice Melgar, secretary-general of the Reproductive Health Advocacy Network, shared afterwards that they were questioned for bringing non-residents to the consultation. Melgar and Beth Angsioco of the Democratic and Socialist Women of the Philippines defended this action, noting that the barangay ordinance—being the first of its kind and possibly replicated elsewhere—had an impact on all women.

Irreconcilable differences
The objective of the public consultation was to give both sides the opportunity to address the three major points that the Muntinlupa City Committee on Health and Sanitation took issue with, and ideally find a compromise that would make the amended ordinance more palatable to all concerned. As the discussion took its course, it was increasingly apparent that both sides would never come to an agreement, as they had vastly differing interpretations of the law.

The anti-ordinance panel’s main argument is that the ordinance gives the barangay powers beyond what is legally constituted by redefining terms and categories already legally defined, meting punitive damages to individuals not covered by the law, and violating the right to equal protection of the law. The pro-ordinance panel stuck to the primacy of the right to life, with the life of the unborn child being more “equal” than others.

Here is a summation of their respective arguments:

Posing sanctions against the purchase of contraceptives—now classified as abortifacients—violates both FDA authority and the pharmacy regulation act (RA 5921). The prescribed punitive measures also go beyond the maximum fines that a barangay can charge; it also covers both pharmacists and buyers and thus goes beyond RA 5921.

Time constraints were set for each panel to formulate their answer. It was quite frustrating to listen to the pro-ordinance panel waste their cumulative nine minutes evading the question at hand. Instead, they would bring up issues that had nothing to do with the ordinance, or take a defensive stance and undermine the credibility of the government agencies or laws cited by the opposing side.

The few times that they did cite the law, they would appropriate the terms and twist it to suit their interests. They maintained that the Constitution states that life begins at conception (i.e. when the egg and sperm meet, form a zygote, and gets implanted in the uterus) and that abortion is defined as the termination of pregnancy. Yet they insisted on defining FDA-classified contraceptives as abortifacients. Note that contraceptives do not terminate pregnancies, though they do minimize the chances of conception taking place.

The pro panel also emphasized the fallibility of artificial family planning methods, pegging the failure rate at 30% to undermine the usefulness of the DOH family planning program. But they do not propose an alternative, nor do they disclose the failure rate of natural family planning. A 100% success rate is too high a standard for judging the success of any program. In addition, the pro-ordinance panel made very contradictory statements about information dissemination; they argued that the less savory effects of birth control should be made known to the public, but ban any sort of sex education and information dissemination that is not previously sanctioned by parents.

The anti-ordinance panel seemed more prepared in comparison, sticking to the points raised by the committee and citing specific laws that they believed were violated by the ordinance. They specifically stayed away from RH Bill arguments, noting that these discussions should be held in Congress, and that the barangay consultation should just stick to the ordinance. It helped that the impartial government resource persons invited by the barangay all sided the anti-ordinance panel, and came up with their own statements reiterating the various violations of the ordinance. These resource persons represented the DOH, FDA, Pharmacy Board, NCRFW, CHR, and the UP College of Law. Sen. Pia Cayetano, chair of the Senate committee on women, also sent a written statement denouncing the ordinance.

Barangay biases
The barangay council did its level best in moderating the hearing, but there were some instances in which they seemed to show bias for the pro-ordinance side. One such instance was when they called on a resource person, identifying him specifically as a resource person for the pro-ordinance panel. A young boy in his early teens was identified as a representative of the youth of Ayala Alabang. Unlike the other resource persons who represented government agencies whose jurisdiction was allegedly trespassed by the ordinance, this boy’s claim to being a youth representative was his status as a resident of the village. A pro-ordinance teenager had the opportunity to sway the audience about the possible impact of the ordinance on the youth. Instead, it emphasized the lack of information and understanding that some sheltered youth may have about the difference between contraception and abortion.

Another instance was during the open forum, when they allowed a pro-ordinance audience member to direct a question about birth control pills to the DOH representative, then allowed the pro-ordinance panel to rebut the statement made by the DOH. It was specifically stated at the start of the hearing, that questions may only be directed to either side, without any opportunity for rebuttal. An anti-ordinance member directing a question to the barangay council was asked to forfeit his question.

Democratic or divided?
In his closing statement, anti-ordinance representative Ruffy Biazon noted that the ordinance created an unprecedented division among the village residents, while Sen. Pimentel countered that this was to be expected; that there was no unanimity in a democracy. It was clear all throughout the hearing that both factions, panel and audience members alike, were passionate about their beliefs, and would not back down. The hearing ended prematurely due to lack of time, leaving both sides unsatisfied and wondering whether the consultation would culminate in a satisfactory resolution.