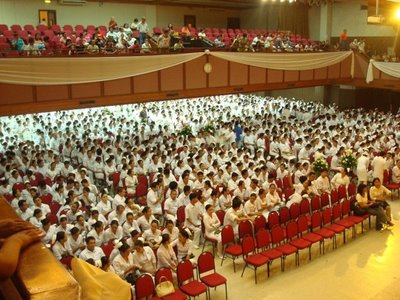 In our effort to encourage discussion in all walks of society, Mulat Pinoy has been requesting messages, articles and commentary on popdev matters from various personalities.
Our contributors are a varied sort: some from NGOs, others from a more corporate background; some are well-known across the board while others lead quieter lives. Regardless of who they are and where they come from, they have something to say about our population, and we should all listen.
The following message is from Marian Regina M. Layug, a consultant for the Professional Regulation Commission:

She sat next to me at the doctor’s waiting room armed with a pen and sheaf of forms. “Are you a med rep?” I asked. She nodded, exuding the air of patience that med reps cultivate while they wait for doctors to affix their chicken-scratch signatures on those forms to show that the med reps had delivered their promotional spiels.

What do med reps take up in college, I wondered. I nearly fell from my seat when the girl said she had passed the licensure examination for nursing in November 2009. This examination rang bells in my mind. It had the highest number of examinees in the history of Philippine Nursing at 94,446. It also saw the highest passing rate for first-time takers at 49.36 per cent. This percentage is equivalent to 26,831 out of a staggering 54,960 first-timers. I gazed at this girl in awe. I guessed that she could have been one of those first-timers.

From worldcorrespondents.com: Nurses with Noynoy, July 2010

The incident clung to my memory. I came face to face with the reality that I had written about.

I am a consultant for the Professional Regulation Commission. In the speeches and messages that I write for the PRC for no less than 43 professions, I quote these statistics regularly. But this girl was no statistic. In a speech I wrote for her oath-taking in March, I had mentioned that the first-timers’ high passing rate showed that they were better prepared for the examinations than previous batches. But if her batch had such high passing scores, why could she not work as a nurse?

Of the 42 professions regulated by the PRC, nursing has been the most popular one for the past few years. The Philippines is the number one supplier of nurses to the world. In a country where so many fight for so few jobs, nursing has been a beacon of hope.

For once our runaway population worked in our favor as the worldwide hunger for Filipino nurses went unabated from the 1990s right into the new millennium. Parents pressured their children to take up nursing for the tempting job offers abroad. Young people who could have been foresters, agriculturists, or chemists dutifully signed up for the nursing course. Doctors, teachers and accountants took up nursing as a second career, even in their 30s and 40s. Here, they could be guaranteed a job.

And then, the jobs abroad slowed to a trickle and began to dry up. There simply aren’t enough jobs now for the tens of thousands of licensed nurses, including this girl who worked as a med rep.

The boom in nursing jobs only masked the problem of too few jobs for too many job seekers. Our soaring population has led to brain drain. The Philippine Overseas Employment Administration reported that 1,236,013 Filipinos were deployed for work abroad in 2008, 14.7 per cent higher than in 2007. Tomas Africa, the vice president of the Philippine Statistical Association, wrote: “Planners should be aware that on average one million people have been entering the labor force in search of work since April 2008, much more than the historical 350,000 job seekers.”

I never asked my med rep friend if nursing was her real ambition, or if, like thousands of others, she had succumbed to a parent’s prodding so she could find a job and bail them out of their financial straits.

How many young people have given up on a dream to be a physicist, an artist, or a writer, and forced themselves into courses they did not want? Overpopulation may be about live births but it is also about the killing of the dreams and hopes of our young people.