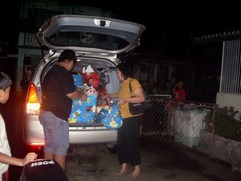 The following message is from Engr. Grace Nicolas, who is trying to increase awareness about popdev in her hometown of Calauan, Laguna:

It was 1 o’clock in the afternoon, and the refrigerator floating alongside my car was travelling much faster than me. I was stranded in Barangay Bucal, Calamba City. The flood was rushing around every car, and none of the cars were moving. It was September 26, 2009 and the word on the radio was “ONDOY.”

I was in the driver’s seat, and with me were three friends from Los Baños. We had just come from school. The water was brown. We thought the flood was caused by the new subdivision that was under development, soon to be home for those who can afford to live in the hills. The developers had removed all trees to make roads. I suddenly blamed the government for the approval they gave to progress they thought could help the community, a sprawling subdivision in a new city.

I finally made it home at 10 o’clock that night. Without the flood, my lovely Calauan would only have been one hour away. I kept on thinking about the causes: climate change, ignorant and careless human beings, the Department of Environment and Natural Resources, the Laguna Lake Development Authority, subdivision developers, contractors and builders like me.

I became an environmentalist two years ago. My environmental technology professor—whom I consider my mentor—asked me why I wanted a master’s degree. I had my own company, so I didn’t really need a degree just to get a higher position at work. I told him that I didn’t plan for this. It just happened that I felt I needed to grow more as a person. I believed that continuing education is a must, whether it’s as formal as going to school or something as simple as reading a newspaper. I heard on the radio that said the water levels in Laguna de Bay were exceptional. The last time this happened was a decade or two ago. I remembered that the decomposition of plastics, styrofoam and glass bottles take anywhere from 18 to 1 million years. I tried to illustrate this with a glass of water: if I add a small piece of plastic every minute, the water will overflow, and the decomposition of that plastic will take 18 years. So imagine that on a much larger scale in the bay, which is flanked by the capital city of Sta. Cruz and places like Bae, Los Baños, Calauan, Pila and Victoria.

I found myself asking my friends, classmates, and online contacts for donations. These were donations not for Calauan where I lived, but for the victims in bay area. The schools were used as relocation sites, the places where the victims once lived now empty and eerie. I went around with my secretary, going towards the Laguna de Bay. There were boats in a place that only tricycles and jeeps used to frequent. I saw a kid at a sari-sari store, clutching an umbrella, knee-deep in water. I took pictures of everything, and I was so confused. Why was this is happening? Was it the wrath of God? Or a man-made mistake? I asked my professor to excuse me in the middle of our class, and I asked my classmates to help me distribute the goods that I had collected. The donations were placed in paper bags, because I didn’t want to add to all the plastic in the water. The donations were meant for barangays in the bay area, where it took the water three long months to subside. A few of my classmates came with me. They removed their shoes and folded their pants up, and we distributed the relief goods. They were students just like me, taking up a Master’s degree in Management, majoring in Engineering Management. I was so overwhelmed.

The experience taught me a lot about awareness. Most people don’t know the consequences of throwing a small piece of candy wrapper just anywhere. They don’t know that cigarette filters take 18 years to decompose. I started attending advocacy programs, DENR conferences, anything that would make me more knowledgeable, anything that I could share with my small community. Maybe, one step at a time, I can make a difference.

I started organizing seminars about climate change and the ozone layer. I wanted to develop a current events and awareness program. I started distributing walis tingting as a way to help the livelihood program of a local women’s cooperative. I am learning so much that I am often surprised.

My employees wonder why I am doing this. People like me have problems too, so why add more problems which are not really mine to solve? I just really want to help in my little way. Hopefully, one step at a time, I can make a difference.