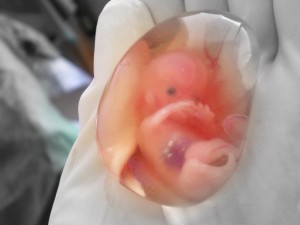 A report released by the Center for Reproductive Rights revived an ongoing debate about reproductive health, particularly abortion. Now the Philippines whirls in a Roe-v-Wade-type of environment: to ban or to decriminalize? Pro-life advocates bill abortion as a desecration of the human dignity of life. The CRR report bills the ban on abortion as an abuse of human rights. So, who’s got it right?

The Law
The Revised Penal Code of the Philippines criminalizes abortion and mandates imprisonment for women who undergo the procedure (Article 256), as well as those who assist (Article 258) – including parents, physicians, midwives, etc.

(Of course no one has been jailed for abortion in recent years – although many have died. In parts of Latin America, however, women sit in jail for the “homicide” of their unborn children.)

The penal code was enacted in 1930 and remains in effect today. No laws exist to expressly authorize abortions for health reasons or when the woman’s life is endangered by the pregnancy, or in cases of incest or rape. Notably, the constitutionality of abortion has not been challenged before the Supreme Court.

Debate over “where life begins” is legally moot, as the constitution expressly states that it is from the time of conception. Sec 12, Art II:

Which brings us back to our original dilemma: if they both should be equally protected under the law, then why do we have laws protecting the unborn but criminalizing the woman?

The Figures
Before we go on to the arguments, let’s look at the numbers in the Philippines:

Most of these deaths are caused by complications from an “unsafe abortion,” which CRR defines as:

…a procedure for terminating an unwanted pregnancy either by persons lacking the necessary skills or in an environment lacking the minimal medical standards, or both.

But in a predominantly Catholic country where abortions are stigmatized, and where the law criminalizes abortion, what other options do women have?

(Note that I used the term “pro-rights” over “pro-choice.” Sometimes, abortion is not a choice, it’s necessary).

The Main Arguments
Pro-Life Philippines says this about why women have abortions:

For those who are married: to space pregnancies; too many children; added financial burden.
For the unmarried: unwanted pregnancies.
Many have an abortion because the latter “interferes with occupation, studies, or employment.”

The main thrust of pro-life advocacy is the protection the unborn child’s life, the preservation of families, and upholding values.

On the other side of the fence, CRR reports that in the Philippines, most women have abortions to protect their health, or due to poverty, or to allow them to care for their existing children, or they are “unable to control their fertility through contraception.” They also point out the implications of criminalized abortion:

[It leads] directly to the preventable deaths of thousands of women each year. In practical terms, children have needlessly lost their mothers, husbands have lost their wives, and parents have ost their daughters. While women’s reasons for abortion may vary, because of the criminal ban any decision to terminate a pregnancy leads in just one frightening direction— toward painful, risky, and potentially fatal methods of pregnancy termination.

The reasons set out by Pro-Life Philippines are quite narrow and leaves out some important considerations. “Added financial burden” for one sounds petty, but it can be a matter of life a death for many of the country’s poor, who from the beginning did not have easy access to reproductive health education. “Unwanted pregnancy” is quite belaboring the point – if it was wanted, would it be aborted? What are the reasons behind it? Rape? Incest? Health concerns for the mother? No financial means for adequate pre-natal care? No available options for adoption?

At the same, there must be a balancing act between allowing abortions for those who truly need it, versus those who just see it as a “way out.” PilarVersoza of Pro-Life Philippines, speaking to the New York Times in 2005, said that she believed abortion had become a “convenient option” for some women. It’s a risk, but the alternative is riskier.

Among CRR’s key findings is that “criminalization of abortion has nor prevented the procedure, but made it unsafe.” And indeed, some of the actions of pro-life groups have made safer abortion methods harder to come by. After intense lobbying, the popular abortifacient pill Cytotec available over the counter for 20 pesos, had been banned. They now cost up to six times as much per pill in the black market, leaving many more reasons to seek alternative methods of abortion, including DIY techniques.

Pro-Life admits that abortion is done by hilots and the women themselves. CRR reports:

The most frequently used unsafe methods include painful abdominal massages by traditional midwives, inserting a catheter into the uterus, medically unsupervised consumption of Cytotec… to induce uterine contractions, and ingestion of herbs and other concoctions sold by street vendors. Common physical complications caused by these methods include hemorrhage, sepsis, perforation of the uterus, damage to other internal organs, and death.

Why action cannot wait
According to Haydee Morales of Planned Parenthood,

Instead of reducing the number of abortions, …draconian laws are simply forcing the procedure underground, making it unsafe and all too often deadly. Severe restrictions do not prevent abortion. They do not protect anyone. Instead they place women’s lives at risk. No matter how you feel about abortion, the truth of the matter is that restrictions on abortion don’t change the reasons women have them.

Related:  What is population and development?

“But there are options,” Versoza said (in 2005). “Education is one, but the way sex education is being taught in school and in the media does not help. What is being imparted to our children is information, not values formation.”

How far can the state go in “teaching values” to its constituents, if at all? At the same time, the state cannot ignore such a significant health problem that is tied to its laws.

_Image via Wikipedia, some rights reserved.