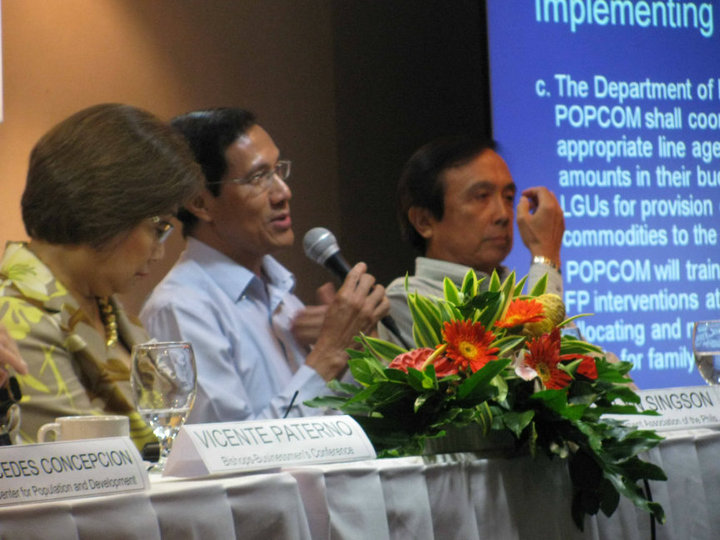 A consultation on a consensus population bill was held last July 21, 2010 at the Asian Institute Management in Makati City, veering away from the usual steps of filing a bill in both Congress and the Senate. Six (6) consultation sessions were held nationwide. These were organized by four member organizations of the Joint Steering Committee: Bishops-Businessmen Conference (BBC), Management Association of the Philippines (MAP), Makati Business Club (MBC), and the Philippine Center for Population and Development (PCPD). The committee hopes to be guided by the presentations and opinions of various sectors with respect to the varying needs and realities in the different areas across the country. An unorthodox approach, the contents and provisions in the proposed bill are products of the people’s choices, thus, increasing its chances for immediate passage and implementation.

Common to all bills filed in the Upper and Lower House are results of studies and findings of population experts relating poverty and its key causes as well as the decline in human capital. This is just one of the many issues that spring from the mismanagement of population. Using a business perspective has provided the bill’s advocates as well as lay people a better understanding of the need for a more comprehensive and up-to-date national policy on population.

The Committee clearly stated that their work was deliberately geared towards having a bill more acceptable to more Filipinos; the three business organizations (MBC, BBC, MAP) objected to some provisions contained in the RH Bill, specifically its general tone of compulsion. Despite this, advocates are still supportive of this consensus bill as it provides our lawmakers a sense of urgency in providing the people with a population management-related policy.

Only in the Philippines can you see people still debating on the issue of the need for an up-to-date policy on population. Our neighbor countries and international organizations might consider this passé because it is something that should be automatically provided by the state; begging for its passage is absurd, said Dr. Ernesto Pernia of the UP School of Economics. It is the responsibility of the state to ensure human development by continuously updating standards of measurements such as infant and maternal mortality, employability, and non-discrimination among others.

In addition, it is disheartening to know the cost of life in the Philippines: a bleeding woman due to give birth is too poor in health and financial resource to be accepted for treatment in a government hospital. MAP’s Peter Wallace shared this bitter experience of his driver whose then-pregnant wife died as a result; the hospital refused to give her a blood transfusion unless they paid Php 1,600. But this is a common occurrence. Thousands of such incidents may be documented, while thousands more are forgotten. Notwithstanding numerous laws related to health care, scenarios like this are common for those who cannot afford the rising price of a decent life.

That there are so many incidences of unplanned pregnancies is testament to the lack of genuine concern and effort from the agencies to further human development. While some people may believe that their offspring is their chance to combat poverty, the basic needs of their children are not sufficiently addressed to follow their idea of banking on the human capital. The numbers may be present, but the quality of the human resource is lacking. This is the argument of the business groups against producing more offspring as a means to alleviate a poor family’s socio-economic status. A responsive national policy may inform people about this important correlation, which aims nothing less than having a happy, enjoyable, and quality existence.