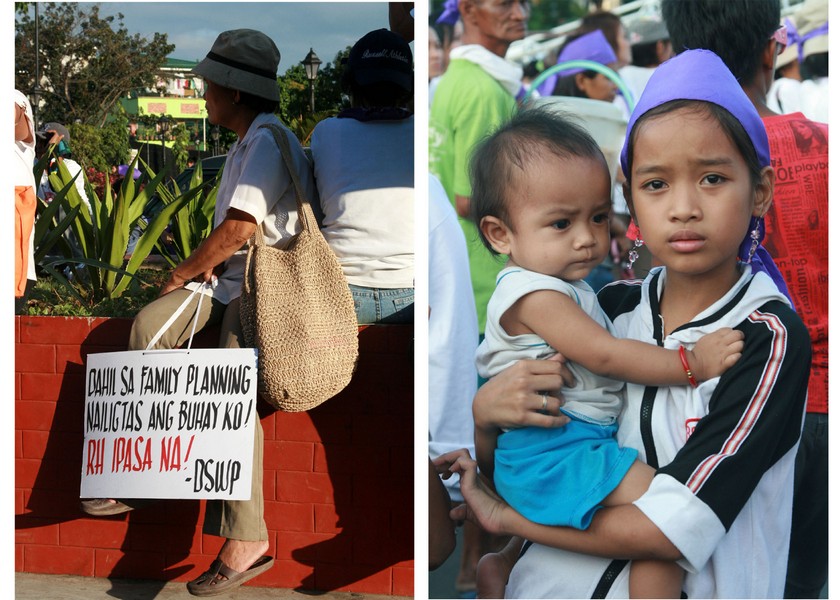 Text and Photos by Kara Santos for Mulat Pinoy

The following photo essay is from Kara Santos, who also writes for Women’s Feature Service and IPS Asia:

Every year, thousands of women in the Philippines die giving life.

Many women face unnecessary risks to their life and health in pregnancy and childbirth and most do not even want to get pregnant.

Thousands flock to the streets

As people around the world mark the 100th Anniversary of Women’s Day, thousands of Filipinas took to the streets to push for the passage of a comprehensive reproductive health bill. Wearing vibrant purple bands, women, men and children from grassroots communities joined the long march calling for the passage of the much delayed Reproductive Health Bill.

Elizabeth Angsioco, National Chairperson for the Democratic Socialist Women of the Philippines (DSWP) says that the bill has been languishing in the Halls of Congress for over 16 years, resulting in a “massacre of women.”

“March 8 is supposed to be a day for women to celebrate, but such celebration is meaningless knowing that each day, eleven Filipino women, mostly poor, die due to pregnancy and childbirth complications,” said Angsioco.

“So many lives have been wasted. The Catholic Church will never change their opposition on the use of contraceptives, but they are not the ones directly affected by the issue, it is the women, especially poor women,” she added.

Protect me from ignorance!

Various sectors of civil society including youth and interfaith organizations are supportive of the RH bill. In a Pulse Asia Survey in 2010, 87% of Filipinos said they believed that the government should fund support for contraceptives, including IUDs, condoms, ligation and vasectomy.

Related:  Homeless Azkals: A commentary on sports programs in the Philippines

The Philippines is said to have one of the highest maternal mortality rates in the Asian region, with an estimated 4,500 women dying every year due to complications related to childbirth, according to the UNFPA.