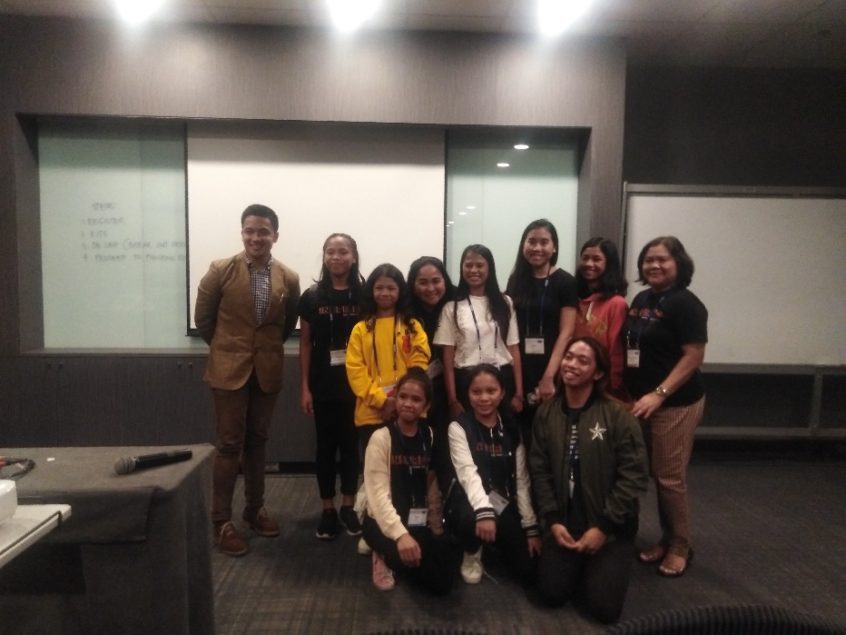 Among the Day 2 simultaneous sessions for Ako Para Sa Bata 2019 was on Income and Economic Strengthening, titled “Influencers, Entrepreneurs, and Dreamers: Young People at the Helm.” 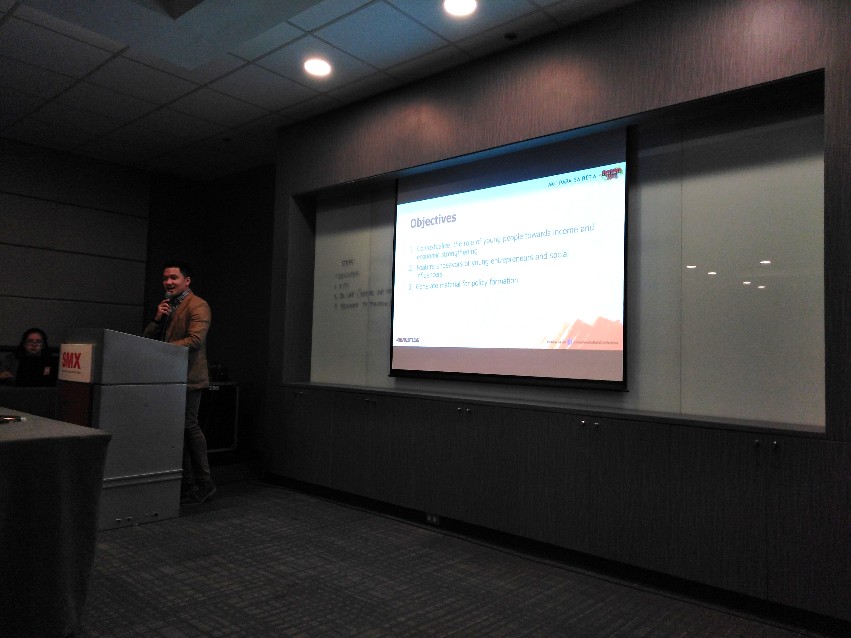 Juliano Guiang outlines the objectives of the session

The session was moderated by Juliano Fernando Guiang, a host of several shows from the People’s Television Network—such as “Tayo Na” on PTV-4—and a board member of the UN Youth Advisory Board. Serving as chair for the talk was Dr. Namnama Villarta-De Dios from the PGH-Child Protection Unit, while Rodmar Eda, part-time professor at AMA Computer College in Olongapo City with an extensive background working in community and youth development, served as co-chair.

Director Gemma Gabuya from the Department of Social Welfare and Development (DSWD) delivered the first talk of the session: “Success Stories of Some Beneficiaries of 4Ps.” Pantawid Pamilya was a program established through R.A. 11310, also known as the “Pantawid Pamilyang Pilipino Program (4Ps) Act.” This act, Dir. Gabuya explained, aimed to tackle poverty on a national level through the provision of cash stipends to impoverished families with pregnant women and children so long as they met specified conditions. The conditions involve complying with health requirements—such as mandatory vaccination—and fulfilling educational responsibilities for both schoolchildren and parents through family development sessions. 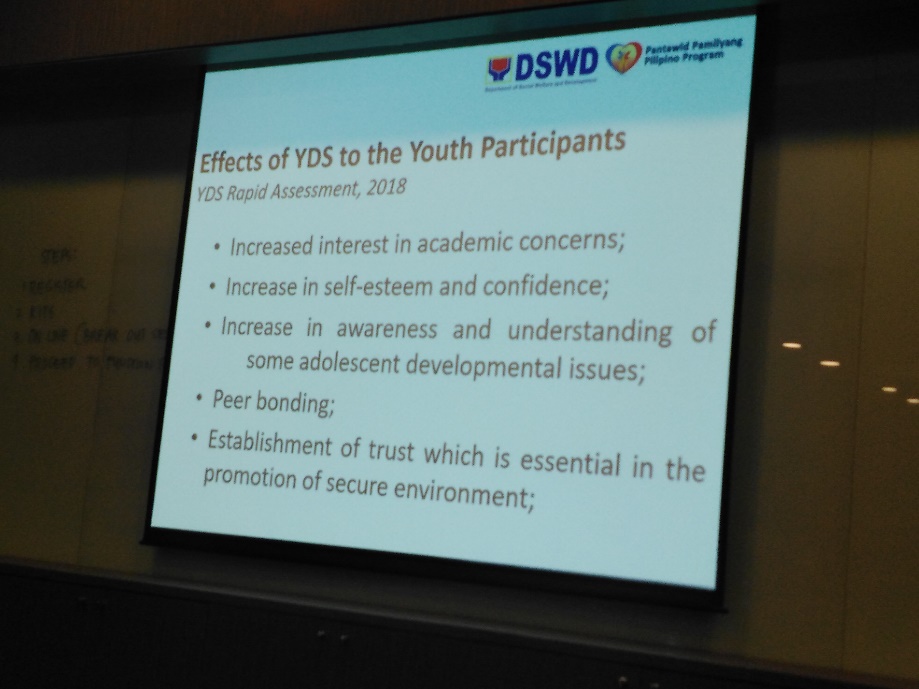 From Dir. Gabuya’s discussion on the 4Ps youth development sessions

Dir. Gabuya related how the 4Ps program has helped improve their youth beneficiaries’ school attendance while helping to develop their mental and social capacities through after-school youth development sessions. She also discussed the 4Ps initiative Balik Bata Eskwela (BBE), which, as of August 2019, had helped send 286,800 beneficiaries back to school.

The next speaker for the symposium was Audrey Pe, the 18-year-old founder of WiTech (Women in Technology). Her talk was entitled “Frontliners and Innovators for Social Upliftment of the Marginalized Sector.” At 15 years old, Pe realized there seemed to be a very slim avenue for women in technology and was simply told that she “didn’t belong in tech.” After doing extensive research and consulting with women who work in tech, she eventually formed WiTech, an organization focused on empowering both women and men alike through technology and dismantling gender-rooted barriers within the field. One such barrier for Pe was the wage gap. “I didn’t want to wait for the gender pay gap to fix itself. I wanted to do something,” she stated.

Pe went on to describe WiTech’s achievements in terms of empowering youth around the country, specifically in Marawi. She related the organization’s recent trip to the region, where she and other WiTech members traveled to Marawi to teach programming basics to high school students along with providing their schools with computers.

WiTech currently works with other organizations, such as the Philippine Toy Library and Let’s Read Foundation to continue reaching out and providing a safer experience for youth empowerment. As an officially recognized NGO, Pe hopes to continue expanding the reach of WiTech even as she readies for her studies in Stanford University next year. 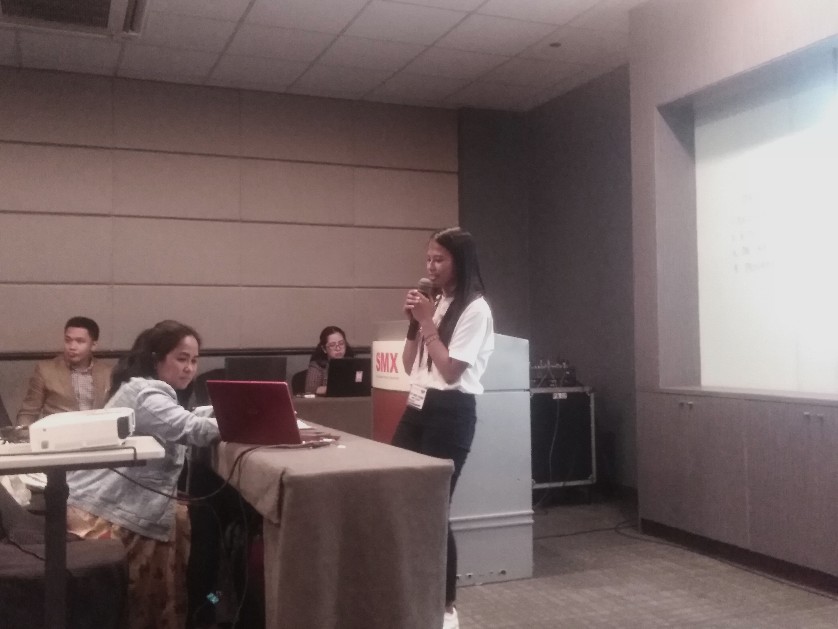 Discussing “Sustainable Tourism: Travel that Transforms” was the last speaker for the session, Anna Salamat. Salamat was a Gawad Kalinga beneficiary who was offered a scholarship from the School for Experiential and Entrepreneurial Development (SEED), which then got her involved in Make a Difference Travel, or MAD Travel, a local travel agency that aims to promote sustainable tourism and immersion in different indigenous communities. “We have fun as we make a difference,” Salamat claimed. She shared that one of MAD Travel’s main goals is the complete reforestation of 3,000 hectares of land in Zambales belonging to the ancestral communities of the local Aetas.

Salamat stressed that MAD Travel is very conscious about making sure their cultural immersion activities do not verge on exploitative “poverty porn.” She claimed that MAD Travel establishes ties with the communities they visit for an entire year before engaging in tour-related activities. It was a pertinent issue for Salamat, as she shared her experiences coming from an underprivileged community herself. “Poverty can be my inspiration as well,” she stated, on how she was motivated by Gawad Kalinga, SEED, and MAD Travel to push past her poverty-stricken upbringing and work to make an impact on different communities around the country through travel.

Related:  #APSB2015: (2/2) Grooming, sextortion, and other online predatory acts: How online child sexual abuse happens and how to prevent it

The youth reactors to the session talked about how their lives have been greatly improved by the support of 4Ps. They also shared how inspiring it was for them to see women like Pe and Salamat achieving as much as they have while both still young. “Meron din tayong sarili nating way para masolve yung mga problems around us,” one of the reactors claimed.

Synthesizing the symposium, Dr. Villarta-De Dios stated: “I will never underestimate the children.”