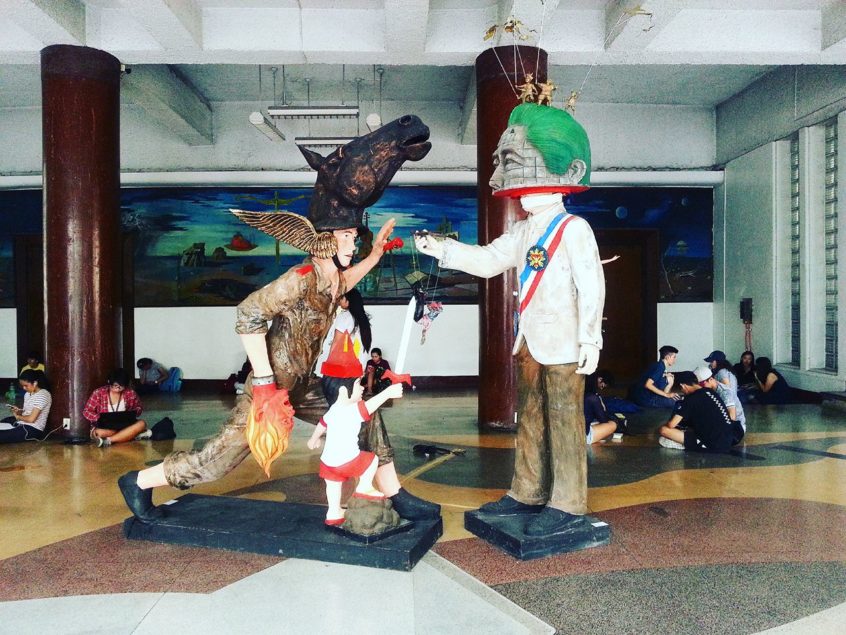 The tight race for the vice presidency gave the country a dose nostalgia, and framed what seemed to be the boxing match of the decade. In the yellow corner was the widow who had yet to prove the strength of her leadership, and in the red, the son of the late strongman, held in contempt for the sins of his father.

Garnering about 13 million votes apiece, the nation was divided. For visual artist Toym Imao, however, it was a wake-up call.

With Sen. Ferdinand “Bongbong” Marcos, Jr. nearly clinching the second highest office in the land 30 years since his father was ousted from power, the country, Toym says, has sadly forgotten the democracy it had fought for so long and hard to regain. It is here, he says, that he finds his duty as an artist.

“It’s disturbing that 13 million people still believe in strongman leadership, and a big percentage of that is born out of misinformation. Now more than ever, kailangan na’ting magkuwento,” he says.

As he explains this, one of his installations—a depiction of the “conjugal dictatorship” of the Marcoses and the “myth” that was Martial Law—sits at the heart of the AS building in the University of the Philippines Diliman, free for the public to see.

The work was his fifth collaboration with the Department of History in UP to help educate the younger generation of their forgotten past.

Toym first partnered with UP, his alma mater, back in 2013 after noticing its lack of interest in commemorating the 150th birthday of national hero Andres Bonifacio. He then displayed Head of State, two headless sculptures carrying ballot boxes with the head of Bonifacio inside, or what he recalled as his first provocative work.

The project was so well-received that it was followed by San Voltes V (2014) and San Mazinger Z (2015) that both dealt with the mechanisms of Martial Law through a play of childhood memories, hoping to spark discourse across generations.

“Even among UP students, it’s sad that some still have a very shallow understanding of what Martial Law is—and it’s not their fault. It’s my generation’s fault. We’ve become lazy in putting all these things out,” he shares.

That sentiment became his motivation to channel more such stories into his work.

The costs of creating

By his fourth installation—Desaparecidos, which tackled the pain and loss of those left behind by the victims of forced disappearance—the country’s big galleries such as the Lopez and Ayala museums were already calling.
All of a sudden, people started noticing. They actually wanted to listen.

“Nakakatuwa. For museums which only have safe collections, to exhibit something that was so politically charged was a major victory in trying to channel these narratives into the mainstream,” he says.

Related:  Where Are We in the Fight for Equality?

But doing advocacy work through public art was never a job that could pay the bills. And having a family of his own, Toym knew he couldn’t feed them on principle alone.

Even his father, National Artist for Visual Arts Abdulmari Imao, known for his abundant use of traditional Islamic motifs like the sarimanok, discouraged him from treading the same creative path.

After talking it over with his parents, Toym ended up pursuing a degree in architecture.

A part of the movement

Only after establishing his own firm did he find himself falling back to his first love: Fine Arts. He took up a master’s degree in UP for Fine Arts and pursued it further in the Maryland Institute College of Fine Arts in the U.S. for a master’s in sculpture under a Fulbright scholarship.

His career soon blossomed, eventually exhibiting his works worldwide, most of which depicted images from Philippine culture and history. In his homeland, most of his works when he started were monuments commissioned by local governments.

But as time went on, Toym itched to do something more than what most politicians would use as an excuse for a “ribbon-cutting.”

“There’s always a temptation to do generic art. They sell, but they’re just decorations—pieces of furniture. I can do those works but I don’t want to be defined by them. I want to be defined as someone who told stories; who does not only educate but can also move people in a particular direction,” he says.

With this in mind, he developed a balance between creating works that support him financially, and those that further his advocacies.

“Aktibista ako noon sa UP. The satisfaction in doing these works is that you feel like you’re still part of the movement and that you’re doing your part,” he says.

In the midst of the constant struggle for democracy, he believes there is much that art can do to effect change.

“Ang protest art, isa siyang sigaw that is captured in time—angry but at the same time tempered with visuals that everyone can appreciate,” he says. “It cuts through class distinctions.”

With President Rodrigo Duterte strongly alluding to strongman politics, the role that artists must play proves a crucial one, he says.

“We have to remind the people that it’s not the path we should take. Kailangan natin creatively ilabas ang mga kuwentong ‘to,” Toym says.

During a time when everything seems to be visual, when the youth more often frequent their screens rather than the streets, he says traditional ways of protest have somehow lost their appeal. It is therefore up to the artists to think of other ways to reach out.

“Hindi na puwede iyong martsa-martsa nalang. We’ve come to a point that we have to be very creative in addressing these narratives, and that’s where protest art comes in. Art will resonate,” he says.

But like all forms of dissent, engaging oneself in protest art entails a big risk. One cannot waver going against an oppressor or an oppressive system.

“It’s not just a fashion statement. Some people romanticize the struggle—you cannot do protest art for the sake of doing it. Kailangan malalim ‘yun,” Toym says firmly.

Throughout the years, art has been at the forefront of demanding the Filipino’s right to freedom. From all the way back to national hero Jose Rizal, who wrote what Toym calls two of the most powerful protest art in history, Noli Me Tangere and El Filibusterismo, to Nick Joaquin and the others who opposed the dictatorship in the 70’s, he proudly says that artists thrive in adversity.

“In the darkest of times, the artists capture, document and express the feelings of the nation,” he says.

With the country at the cusp of new leadership and the promise of change hanging in the balance, one thing remains certain: should and when those in power threaten the voice of the people, art will be at the front line of every battle.